Author of young-adult book gets vilified and censored by the mob – Why Evolution Is True. Fear of the Female Voice. The Importance of Fostering Emotional Diversity in Boys. You’re given a choice: Would you rather spend your day feeling happy, versus happy interspersed with some moments of sadness, frustration and anxiety? 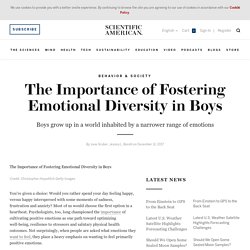 Most of us would choose the first option in a heartbeat. Psychologists, too, long championed the importance of cultivating positive emotions as one path toward optimizing well-being, resilience to stressors and salutary physical health outcomes. Not surprisingly, when people are asked what emotions they want to feel, they place a heavy emphasis on wanting to feel primarily positive emotions. However, research suggests the choice may no longer be a straightforward one. Recent work by psychologists reveals the once-hidden benefits of experiencing a diversity of emotions, both positive and negative. If having lots of different emotions is good for our health as adults, then shouldn't we be fostering the experience of a diverse range of emotions in young children as well?

HERO: Man Who Shot Texas Church Murderer Is An NRA Instructor. So much for those who want to vilify the NRA in the wake of the Texas massacre in Sutherland Springs, Texas, on Sunday: Stephen Willeford, the man who shot and chased the man who killed 26 people in a Texas church, is an NRA instructor. 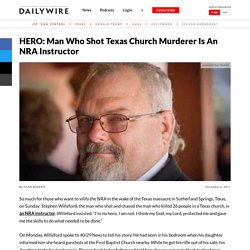 Willeford insisted, “I’m no hero; I am not. I think my God, my Lord, protected me and gave me the skills to do what needed to be done.” On Monday, Willeford spoke to 40/29 News to tell his story. He had been in his bedroom when his daughter informed him she heard gunshots at the First Baptist Church nearby. While he got his rifle out of his safe, his daughter looked outside again.

Ryan North To Be or Not To Be. What I Think About: The Conversation I Wish We Were Having. I spent the last week in Cincinnati grading Spanish AP tests. 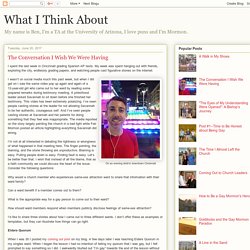 My week was spent hanging out with friends, exploring the city, endlessly grading papers, and watching people cast figurative stones on the internet. I wasn’t on social media much this past week, but when I did get on I saw the same video pop up again and again of a 12-year-old girl who came out to her ward by reading some prepared remarks during testimony meeting. A priesthood leader asked Savannah to sit down before she finished her testimony.

Viral Video of Gay Mormon Girl Misrepresents What We Actually Believe – Happiness Seekers. In the last few days a video of an LDS girl bearing her testimony about being gay has gone viral, being viewed over 20 million times. 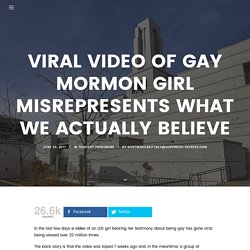 The back story is that the video was taped 7 weeks ago and, in the meantime, a group of anti-Mormons have been working behind the scenes to use it to smear the Church and misrepresent our views (same people involved with MormonLeaks). They immediately began pushing the video to news outlets, and trying to control the narrative in the process. Bliss the pain scale. The War Goes On - Ensign April 2017. Anyone who follows international news will agree that we live in a time of “wars and rumors of wars” (D&C 45:26). 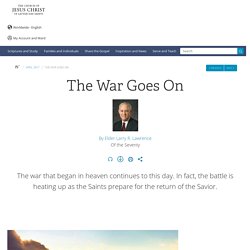 Fortunately, everyone on earth is a war veteran. We have been battling the hosts of evil in an ongoing war that began in the premortal sphere before we were born. Because we had not yet received physical bodies, we fought the War in Heaven without swords, guns, or bombs. But the fighting was just as intense as any modern war, and there were billions of casualties. The premortal war was fought with words, ideas, debate, and persuasion (see Revelation 12:7–9, 11). Censorship and Writing for Young Adults - PEN America. When I was 14 I was an outstandingly mediocre student but a voracious reader and a determined wannabe writer. 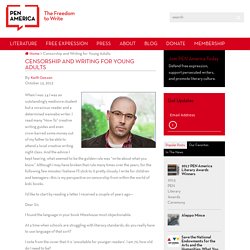 I read many “How To” creative writing guides and even crow-barred some money out of my father to be able to attend a local creative writing night class. And the advice I kept hearing, what seemed to be the golden rule was “write about what you know.” Although I may have broken that rule many times over the years, for the following few minutes I believe I’ll stick to it pretty closely. I write for children and teenagers—this is my perspective on censorship from within the world of kids’ books.

I’d like to start by reading a letter I received a couple of years ago— Dear Sir,I found the language in your book Warehouse most objectionable.At a time when schools are struggling with literacy standards, do you really have to use language of that sort? Bliss the pain scale. Sample from On Being a Photographer. Bill Jay: When we were discussing some definitions you remarked that photography’s core characteristic was to show what something looked like. 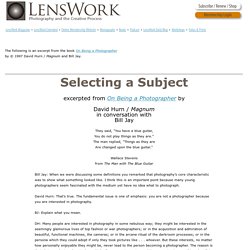 I think this is an important point because many young photographers seem fascinated with the medium yet have no idea what to photograph. David Hurn: That’s true. The fundamental issue is one of emphasis: you are not a photographer because you are interested in photography. BJ: Explain what you mean. 24 Hilarious Puns That Only English Nerds Will Understand. The Candle of the Lord - Ensign Jan. 1983. The Candle of the Lord I have chosen, after much thought, to speak as though your missionaries, your elders and sisters, were here in your place, and to present thoughts more fitted to them, the beginners, the inexperienced, than to you. 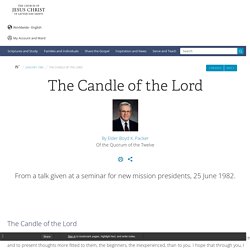 Asbjørnsen and Moe: "East of the Sun and West of the Moon" Once upon a time there was a poor peasant who had so many children that he did not have enough of either food or clothing to give them. 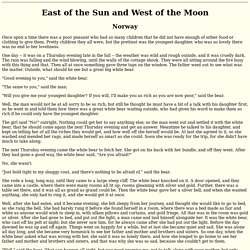 Pretty children they all were, but the prettiest was the youngest daughter, who was so lovely there was no end to her loveliness. One day -- it was on a Thursday evening late in the fall -- the weather was wild and rough outside, and it was cruelly dark. The rain was falling and the wind blowing, until the walls of the cottage shook. Beauty and the Beast: Folktales of Type 425C. Folktales of Aarne-Thompson-Uther type 425C translated and/or edited by D. 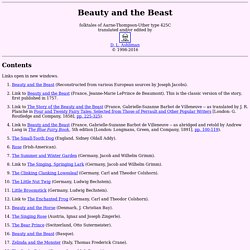 48 Of The Most Beautiful Lines Of Poetry. Wm. Hazlitt - "On The Pleasure Of Hating" (c.1826). “Remember Lot’s Wife”: Faith Is for the Future. You all look so good. Sister Holland walked in and said, “I think I’m going to cry.” You have to understand: Give yourselves 20 or 30 years—then you’ll know how we feel coming back here. We love this campus. Shakespeare's Sonnets. Comitatus & Interlacing. Comitatus and Interlacing *Information from an online discussion by John Hendrix Comitatus is the basic idea that everyone protects the king at all costs even if it means a warrior giving up his own life.

If a king is killed, the warriors must avenge the death of the king or they can no longer serve as warriors for the next king. It is an idea that coexists with the interlacing theme. You will see the comitatus theme all through Beowulf and all of the Anglo-Saxon poetry. The diction (ring-giver, hearth-companion, etc) indicates the idea as well as the behavior. The comitatus idea goes hand in hand with interlacing. Anglo-Saxons.net : The Wanderer. Love - Ensign Nov. 1989. My beloved brothers and sisters, since this is my first opportunity to address you since the call to this new assignment, I want you to know how grateful I am for the privilege of serving the Lord and dedicating my life to the building of the kingdom.

There is no single word that better characterizes the life and mission of the Savior than the word love. The Savior’s mission was begun out of love which the Father had for His children. In John we read, “For God so loved the world, that he gave his only begotten Son, that whosoever believeth in him should not perish, but have everlasting life.” (John 3:16.) A Minor Bird by Robert Frost. Holy Sonnets: Batter my heart, three-person'd God by John Donne. Poetry 180 - The Grammar Lesson. The Neuroscience of Your Brain on Fiction. John W. Gamel. The Elegant EyeAlaska Quarterly Review Volume 6, Nos. 1 & 2, P. 55 Accepted for Best American Essays 2010. Paris Review – Writers, Quotes, Biography, Interviews, Artists. Neil Gaiman: Why our future depends on libraries, reading and daydreaming. Invictus by William Ernest Henley. Comfort and Hope. TONIGHT I CAN WRITE BY PABLO NERUDA.

Diagnosing and Treating the Ophelia Syndrome. By Thomas G. Hans Christian Andersen: The Phoenix Bird. Late Bloomers. Not Waving but Drowning by Stevie Smith : Poem Guide : Learning Lab. Overcoming Those Differences of Opinion - Ensign Jan. 1987. A formula for finding unity in marriage. Whenever two people live together, they are bound to have differences of opinion. Marriage and the Great Plan of Happiness - Ensign May 1995. Making the Marriage Decision - Ensign Apr. 2010. "...Line Upon Line, Precept Upon Precept..."  2 Nephi 28:30. Agency or Inspiration? - New Era Jan. 1975 - new-era. Hanging Out, Hooking Up, and Celestial Marriage.