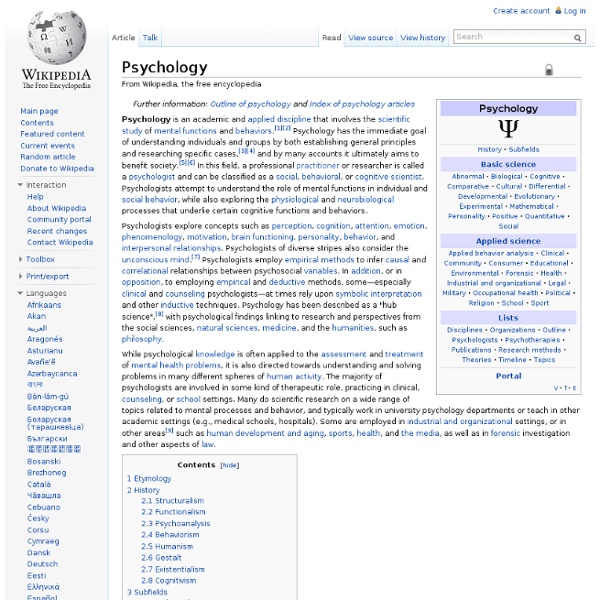 Psychology is an academic and applied discipline that involves the scientific study of mental functions and behaviors.[1][2] Psychology has the immediate goal of understanding individuals and groups by both establishing general principles and researching specific cases,[3][4] and by many accounts it ultimately aims to benefit society.[5][6] In this field, a professional practitioner or researcher is called a psychologist and can be classified as a social, behavioral, or cognitive scientist. Psychologists attempt to understand the role of mental functions in individual and social behavior, while also exploring the physiological and biological processes that underlie cognitive functions and behaviors. While psychological knowledge is often applied to the assessment and treatment of mental health problems, it is also directed towards understanding and solving problems in many different spheres of human activity. Etymology History Structuralism Functionalism Psychoanalysis Behaviorism Humanistic

Related:  the function of reason - Whitehead

Portrait of an INFP As an INFP, your primary mode of living is focused internally, where you deal with things according to how you feel about them, or how they fit into your personal value system. Your secondary mode is external, where you take things in primarily via your intuition. INFPs, more than other iNtuitive Feeling types, are focused on making the world a better place for people. Their primary goal is to find out their meaning in life. What is their purpose? How can they best serve humanity in their lives?

Economics For a topical guide to this subject, see Outline of economics. Economics is the social science that studies the behavior of individuals, households, and organizations (called economic actors, players, or agents), when they manage or use scarce resources, which have alternative uses, to achieve desired ends. Agents are assumed to act rationally, have multiple desirable ends in sight, limited resources to obtain these ends, a set of stable preferences, a definite overall guiding objective, and the capability of making a choice. There exists an economic problem, subject to study by economic science, when a decision (choice) has to be made by one or more resource-controlling players to attain the best possible outcome under bounded rational conditions. In other words, resource-controlling agents must maximize value subject to the constraints imposed by the information the agents have, their cognitive limitations, and the finite amount of time they have to make and execute a decision.

American Psychologist® Prior to submission, please carefully read and follow the submission guidelines detailed below. Manuscripts that do not conform to the submission guidelines may be returned without review. Submission Submit manuscripts electronically (.rtf or .doc) via the Manuscript Submission Portal. In addition to addresses and phone numbers, please supply email addresses and fax numbers. Self-help Self-help, or self-improvement, is a self-guided improvement[1]—economically, intellectually, or emotionally—often with a substantial psychological basis. Many different self-help groupings exist and each has its own focus, techniques, associated beliefs, proponents and in some cases, leaders. "Self-help culture, particularly Twelve-Step culture, has provided some of our most robust new language: recovery, dysfunctional families, and codependency.

Careers for INFP Personality Types Whether you're a young adult trying to find your place in the world, or a not-so-young adult trying to find out if you're moving along the right path, it's important to understand yourself and the personality traits which will impact your likeliness to succeed or fail at various careers. It's equally important to understand what is really important to you. When armed with an understanding of your strengths and weaknesses, and an awareness of what you truly value, you are in an excellent position to pick a career which you will find rewarding. INFPs generally have the following traits: The INFP is a special, sensitive individual who needs a career which is more than a job. The INFP needs to feel that everything they do in their lives is in accordance with their strongly-felt value systems, and is moving them and/or others in a positive, growth-oriented direction.

Geography Geography (from Greek γεωγραφία, geographia, lit. "earth description"[1]) is a field of science dedicated to the study of the lands, the features, the inhabitants, and the phenomena of the Earth.[2] A literal translation would be "to describe or write about the Earth". The first person to use the word "geography" was Eratosthenes (276–194 BC).[3] Four historical traditions in geographical research are spatial analysis of the natural and the human phenomena (geography as the study of distribution), area studies (places and regions), study of the man-land relationship, and research in the Earth sciences.[4] Nonetheless, modern geography is an all-encompassing discipline that foremost seeks to understand the Earth and all of its human and natural complexities - not merely where objects are, but how they have changed and come to be. Geography has been called "the world discipline" and "the bridge between the human and the physical science". Introduction

International Journal of Psychological Research ISSNe 2011-7922Journal of the department of psychology of Universidad de San Buenaventura, which is located in Medellín, dedicated to promote the psychological and neuroscientific knowledge in all its ways and related sciences. INTERNATIONAL JOURNAL OF PSYCHOLOGICAL RESEARCH is the electronic version of the printed publication of the same name (ISSN 2011-2084). This publication brings together the interest and this focused knowledge referred to professionals in psychology, psychiatry, Neurology, neuroscience and human behavior; In addition, this publication is a training and relevant resource for students in the areas of mental health, neuroscience, humanities and basic areas related to psychological research.

Getting someones IP through bit.ly Free Download Rapidshare Mediafire Netload Extabit I know that most of you already know that trick, but still i want to share with you all. So here it goes: 1. First go to this website : Download: www.s33.net/rec/create 2. Now you will see this screen. Here enter your desired password and the link (preferably to a image). And click on Submit. 3. INFP Relationships INFPs present a calm, pleasant face to the world. They appear to be tranquil and peaceful to others, with simple desires. In fact, the INFP internally feels his or her life intensely.

Linguistics In the early 20th century Ferdinand de Saussure distinguished between the notions of langue and parole in his formulation of structural linguistics. According to him, parole is the specific utterance of speech, whereas langue refers to an abstract phenomenon that theoretically defines the principles and system of rules that govern a language.[9] This distinction resembles the one made by Noam Chomsky between competence and performance, where competence is individual's ideal knowledge of a language, while performance is the specific way in which it is used.[10] In classical Indian philosophy of language, the Sanskrit philosophers like Patanjali and Katyayana had distinguished between sphota (light) and dhvani (sound). In the late 20th century, French philosopher Jacques Derrida distinguished between the notions of speech and writing.[11] Nomenclature[edit] Variation and Universality[edit]

Personal Growth Perhaps the most important realization that an individual can make in their quest for personal growth is that there is no single formula that defines the path to personal success. We all have different goals and priorities, which means that different activities and attitudes will make us feel good about ourselves. We also have different natural strengths and weaknesses that are a part of our inherent personality type. Philosophy Philosophy is the study of general and fundamental problems, such as those connected with reality, existence, knowledge, values, reason, mind, and language.[1][2] Philosophy is distinguished from other ways of addressing such problems by its critical, generally systematic approach and its reliance on rational argument.[3] In more casual speech, by extension, "philosophy" can refer to "the most basic beliefs, concepts, and attitudes of an individual or group".[4] The word "philosophy" comes from the Ancient Greek φιλοσοφία (philosophia), which literally means "love of wisdom".[5][6][7] The introduction of the terms "philosopher" and "philosophy" has been ascribed to the Greek thinker Pythagoras.[8] Areas of inquiry Philosophy is divided into many sub-fields.