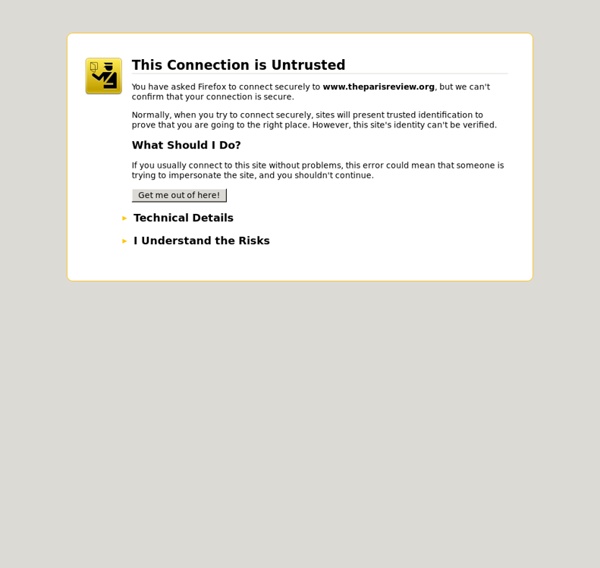 Newsletter Keep up with TPR news: parties, readings, and the latest from the magazine. Submissions The Paris Review is looking for new writers. Read our complete submission guidelines. Crazy Music

Bill Domonkos This is a collection of stereo prints by Bill Domonkos that combine found vintage stereograms and 3Dcomputer graphics. You can view these images in 3D by using the Free-Vision Fusion (Cross-Eyed) Method. 1. Sit with the image directly in front of you, at about arm's length. 2. Keeping the stereo pair of images in the center of your vision, slowly cross your eyes. Nieman Foundation AP photographer Anja Niedringhaus, NF ’07, shown in a 2005 file photo, was shot and killed by an Afghan police officer on April 4. Peter Dejong/Associated Press AP photographer and 2007 Nieman Fellow Anja Niedringhaus was shot and killed April 4 by an Afghan police officer while covering the run-up to the elections. In this photo essay from the Spring 2012 Nieman Reports, the 2005 Pulitzer Prize winner, who had worked on the frontlines of many major conflicts over the past two decades, reflects on work from her 2012 book “At War.” Read the AP story of Anja Niedringhaus's death.

Blog Love Hans’ Instagram photos? Be sure to check out his @89plus project with fellow curator @simoncastets. The project aims to support emerging artists born in the year 1989 or after with sustained stipends, grants and residencies. Hans Ulrich Obrist (@hansulrichobrist) of the Serpentine Gallery in London (@serpentineuk) is one of the art world’s leading curators and perhaps its most creative Instagrammer. In the midst of his daily conversations with creatives—artists, architects, writers and poets like Marina Abramovic (@hudsonmai), Yoko Ono (@yokoonoofficial), Olafur Eliasson (@olafureliasson) and Kanye West—Hans will spontaneously ask them to handwrite a sentence which he then uploads to Instagram.

LRB · Jonathan Raban: Planes, Trains and SUVs James Meek’s last, bestselling novel, The People’s Act of Love, published in 2005 to great critical acclaim, was set in 1919, in ‘that part of Siberia lying between Omsk and Krasnoyarsk’. Anglophone readers who can locate ‘that’ part of Siberia without a good atlas deserve spot prizes. The historical date and exotic location gave Meek a fictional and cultural space in which extraordinary events and people could seem believable, when placed inside a landscape rendered in exact and first-hand detail. Things are possible between Omsk and Krasnoyarsk in 1919 (as they used to be in first-century Palestine) that would raise eyebrows were they reported now in, say, Camden Town or Virginia.

- StumbleUpon Posted by admin on Aug 19, 2012 in Food Preparation | 211 comments In case you are not skilled with the food recipes and preparation, listed bellow are some of the easy food tips to make your meals delicious easy way. No matter you prepare breakfast, dinner or just a snack, the easy food tips are here to make your food even more attractive and awesome. Idea by Janice Kamide Brandalism: Street artists hijack billboards for 'subvertising campaign' - Features - Art Among your comments were: “I love an intelligent response to advertising. Who asked the public if we want our faces filled with adverts as we walk the streets?” and “Hooray! More of this. Everyone should start doing this to adverts”.

Stanley Kubrick, cinephile Web exclusive Revised and expanded, 25 October 2013. Stanley Kubrick, photographed by Dmitri Kasterine in 1970 on the set of A Clockwork Orange. Credit: Dmitri Kasterine: www.kasterine.com Stanley Kubrick worked for almost half a century in the medium of film, making his first short documentary in 1951 and his last feature in 1999. He went to extraordinary lengths to avoid mediocrity in his work, in order that it might last and not fall into oblivion. Climate Change anthology, Feeling the pressure book, British Council Switzerland We build engagement and trust for the UK through the exchange of knowledge and ideas between people worldwide. By working with government, civil society and the science community we help to advance debate, knowledge and skills, and want to create a wider mutual appreciation of the UK and Switzerland as valued partners. Our Work in Society In Switzerland, we focus especially on themes of Migration, Integration and Diversity, as well as Youth Networks.

DIY Braided Bead Bracelet - Honestly WTF It’s been awhile since our last bracelet DIY. I don’t know about you, but our wrists have been begging for another colorful addition for months now. So after playing with some materials that were already on hand, we’ve created a tutorial for a braided bead bracelet, which is a not so distant cousin of the hex nut and wrap bracelet. New Virtual Library Offers over 250 Art Books for Free Download Publications, Research Getty Publications makes 45 years of art and conservation titles available online, with more to come When we launched the Open Content Program last summer and released 4,600 collection images to the public (a number that has since more than doubled), I cited this quote from the most recent museum edition of the NMC Horizon Report: “it is now the mark—and social responsibility—of world-class institutions to develop and share free cultural and educational resources.” This dictum continues to inform our efforts here at the Getty, and today I am very pleased to share with you our latest project in this arena, the Virtual Library: An open, online repository of more than 250 Getty publications from our 45-year publishing history, available as high-quality scans to read online, or to download in their entirety, for free. The books in the Virtual Library come from three of the Getty’s programs: the Getty Conservation Institute, the Getty Research Institute, and the J.