Manchuria, the Manchus, and What it Means to Be Chinese. China’s last imperial dynasty, the Qing (1644–1912), founded by ethnic Manchu invaders, was also one of its greatest. 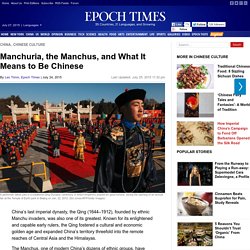 Known for its enlightened and capable early rulers, the Qing fostered a cultural and economic golden age and expanded China’s territory threefold into the remote reaches of Central Asia and the Himalayas. The Manchus, one of modern China’s dozens of ethnic groups, have their origins in the nomadic tribes of the vast, forested hills and plains beyond the Great Wall. Located in what today are China’s industrial northeastern provinces, their homeland—Manchuria—is the site of cultural exchange, imperial growth, and evolving identities. Locked up in the history of Manchuria and the Manchus is a hidden picture of a deeper current coursing through China’s 5,000 years of civilization. Regional Identities For centuries the Chinese have referred to themselves as the “Han people,” so named for the glorious Han Dynasty (206 B.C. In the words of China historian Robert B. The Curious Case of China's Thieving Librarians.

The role of chief librarian at a university would hardly seem a post from which to become a multimillionaire—but Xiao Yuan, who was head of the library at the Guangzhou Academy of Fine Arts until 2006, managed to pull it off. 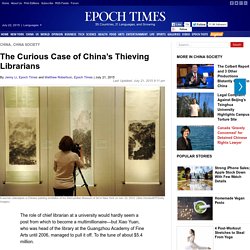 To the tune of about $5.4 million. Xiao stole more than 140 paintings by grandmasters in a gallery under his watch and replaced them with fakes he painted himself, he admitted in court on Tuesday, July 21. The crimes took place for two years, up until 2006. Xiao would substitute famous works including landscapes and calligraphies in a gallery within the library of the Guangzhou Academy of Fine Arts. Despite Xiao Yuan’s remarkable ability to forge art, he had forgotten to remove the seal identifying the pieces as belonging to the Guangzhou Academy of Fine Arts. The stolen works mentioned in the court transcript included paintings by influential 20th century artists Qi Baishi, who used watercolors, and Zhang Daqian, who depicted landscapes and lotuses. 12-things-you-dont-need-anyones-approval-for-though-you-think-you. You are probably a free person with access to the global Internet and similar luxuries. 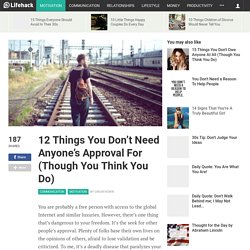 However, there’s one thing that’s dangerous to your freedom. It’s the seek for other people’s approval. Plenty of folks base their own lives on the opinions of others, afraid to lose validation and be criticized. To me, it’s a deadly disease that paralyzes your ability to pursue your dreams. Fortunately, it’s curable so anyone can reclaim their freedom. If you are an unconfident person who often isn’t authentic in order to please other people and you’d like to change it, you are in the right place. 1. Seth Godin. Becoming Minimalist Archives. Autistic Boy With Higher IQ Than Einstein Discovers His Gift After Removal From State-Run Therapy. By Carolanne Wright Contributing Writer for Wake Up World In yet another example of how an out-of-control Goliath state system can cause more harm than good, a teenage boy who was diagnosed with autism at a young age has risen to stellar heights after quitting the special ed system with the help of his concerned mother. 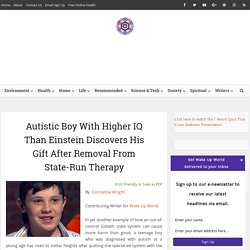 State therapy specialists claimed Jacob Barnett would never tie his shoes, read or function normally in society. The Liberal Arts vs. Neoliberalism. It is a platitude that we cannot defend the humanities without slipping into platitudes. 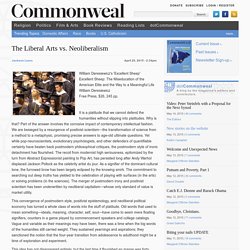 Why is that? Part of the answer involves the corrosive impact of contemporary intellectual fashion. We are besieged by a resurgence of positivist scientism—the transformation of science from a method to a metaphysic, promising precise answers to age-old ultimate questions. What’s the Point of a Professor? ATLANTA — IN the coming weeks, two million Americans will earn a bachelor’s degree and either join the work force or head to graduate school. 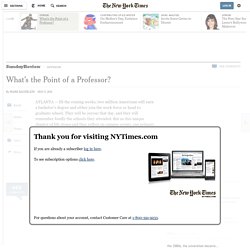 They will be joyous that day, and they will remember fondly the schools they attended. But as this unique chapter of life closes and they reflect on campus events, one primary part of higher education will fall low on the ladder of meaningful contacts: the professors. That’s what students say. Oh, they’re quite content with their teachers; after all, most students receive sure approval. How to Write a Thesis by Umberto Eco review – offering hope to harried slackers. As a young scholar, Umberto Eco trained himself to complete everyday and academic tasks at speed; he quickened his pace between appointments, devoured pages at a glance, treated each tiny interstice of the working day as a chance to judge, reflect or compose. 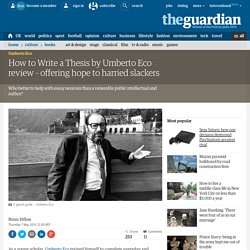 One imagines even his beard was a timesaving outgrowth of impatient ambition. Such deliberate habits in a writer suggest a sort of performance, and Eco has enjoyed showing interviewers around the three studies where he works: one each devoted to reading, typing and writing by hand. Such is his finicky pleasure in his own process that belated Anglophone readers should not be surprised that Eco once published a guide to researching and writing a dissertation.

How to Write a Thesis has been in print in Italy, almost unchanged, since 1977.