Improve Your Artwork by Learning to See Light and Shadow. It's very common for painting tutorials to treat light as an addition to the picture, an atmosphere-maker. 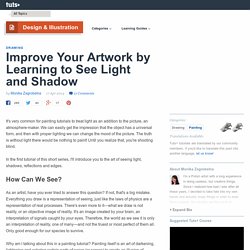 We can easily get the impression that the object has a universal form, and then with proper lighting we can change the mood of the picture. The truth is without light there would be nothing to paint! Until you realize that, you're shooting blind. In the first tutorial of this short series, I'll introduce you to the art of seeing light, shadows, reflections and edges. As an artist, have you ever tried to answer this question? Why am I talking about this in a painting tutorial? If a picture is similar to what we see in our minds, we say it's realistic. To create a convincing picture similar to one created by the brain, first you need to know how the brain does it.

Let's go back to the fundamentals of optics. Here comes the first, the most important rule of painting: light is the only thing we can see. To put it simply, shadow is an area untouched by direct light. Realism, Photorealism, and Style in Drawing. "I know the anatomy isn't correct here, but it's my style", "This drawing lacks style", "I love your style! 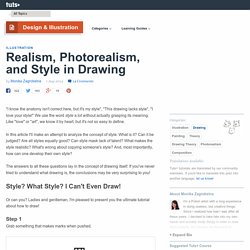 " We use the word style a lot without actually grasping its meaning. Like "love" or "art", we know it by heart, but it's not so easy to define. In this article I'll make an attempt to analyze the concept of style: What is it? Can it be judged? Are all styles equally good? The answers to all these questions lay in the concept of drawing itself. Or can you? Grab something that makes marks when pushed. Push the thing onto a material (something solid like paper, wood, dirt etc). Shift the thing with the strength needed to leave a mark. Sounds absurd? However, this fully objective definition of drawing has been fused with something more vague—style. When someone says "I can't draw" in most cases they're not talking about their inability to hold a pencil, lack of time or some kind of ban—what they really mean is "I don't know how to depict reality on a sheet of paper".

Is Digital Art "Real" Art? Facts and Myths About Digital Creating. When you look at beautiful digital art and compare it with the things you draw with a pencil, you can feel astonished and belittled. 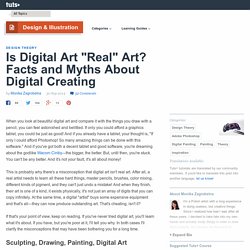 If only you could afford a graphics tablet, you could be just as good! And if you already have a tablet, your thought is, "If only I could afford Photoshop! So many amazing things can be done with this software. " And if you've got both a decent tablet and good software, you're dreaming about the godlike Wacom Cintiq—the bigger, the better. But, until then, you're stuck. There are lots of methods of recreating the real world in some small form. Not so long ago another category appeared—digital art.

Computers are also well known for their function of automating boring and time-consuming processes. Here's the problem: a computer isn't an art tool. To understand it, you need to get familiar with the concept of art media. ClayStoneMetalPlasticBoneWoodIceGlass In this method the outcome is made of lines that symbolize some form known from reality. When the Art Is Watching You. One morning last week, a team of experts at New York’s Solomon R. 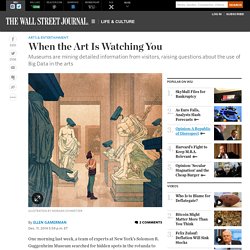 Guggenheim Museum searched for hidden spots in the rotunda to conceal tiny electronic transmitters. The devices will enable the museum to send messages about artworks to visitors via their smartphones while at the same time collect details about the comings and goings of those guests. At today’s museums, all eyes aren’t just on the art. They’re on the visitors. Across the country, museums are mining increasingly detailed layers of information about their guests, employing some of the same strategies that companies like Macy’s, Netflix and Wal-Mart have used in recent years to boost sales by tracking customer behavior. At the Dallas Museum of Art, a frequent-visitor program asks guests to check in at spots around the building via their phones or on kiosks.

RedBall Project artist accuses Shell of appropriating his idea. A New York artist who has been placing giant red balls around cities for 13 years has accused the oil company Shell of using his idea for its latest billboard campaign. 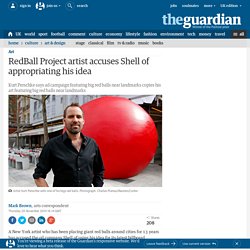 Kurt Perschke’s RedBall Project has toured cities around the world, including London in 2012. It is a simple concept: he makes temporary sculptural interventions by placing 15ft red balls in unexpected places, whether on bridges, in public squares or squeezed between buildings. Shell’s new poster campaign also uses big red balls in unexpected places, and the Brooklyn-based artist has accused the company of appropriating his idea. “It’s painful,” he said.

“There isn’t any doubt in my mind. Perschke created the red ball project in 2001 and has taken it to more than 20 cities, including this year Montreal, Rennes and Galway.