The Science of Stress and How Our Emotions Affect Our Susceptibility to Burnout and Disease – Brain Pickings. I had lived thirty good years before enduring my first food poisoning — odds quite fortunate in the grand scheme of things, but miserably unfortunate in the immediate experience of it. I found myself completely incapacitated to erect the pillars of my daily life — too cognitively foggy to read and write, too physically weak to work out or even meditate. The temporary disability soon elevated the assault on my mind and body to a new height of anguish: an intense experience of stress. Even as I consoled myself with Nabokov’s exceptionally florid account of food poisoning, I couldn’t shake the overwhelming malaise that had engulfed me — somehow, a physical illness had completely colored my psychoemotional reality.

This experience, of course, is far from uncommon. Pre-modern medicine, in fact, has recognized this link between disease and emotion for millennia. But no researcher has done more to illuminate the invisible threads that weave mind and body together than Dr. Bertrand Russell on Immortality, Why Religion Exists, and What “The Good Life” Really Means – Brain Pickings. By Maria Popova Bertrand Russell (May 18, 1872–February 2, 1970) is one of humanity’s most grounding yet elevating thinkers, his writing at once lucid and luminous. 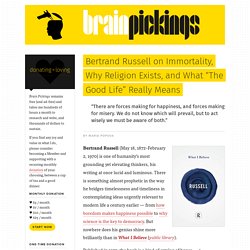 There is something almost prophetic in the way he bridges timelessness and timeliness in contemplating ideas urgently relevant to modern life a century earlier — from how boredom makes happiness possible to why science is the key to democracy. But nowhere does his genius shine more brilliantly than in What I Believe (public library). Published in 1925, the book is a kind of catalog of hopes — a counterpoint to Russell’s Icarus, a catalog of fears released the previous year — exploring our place in the universe and our “possibilities in the way of achieving the good life.”

Russell writes in the preface: In human affairs, we can see that there are forces making for happiness, and forces making for misery. It is difficult to imagine anything less interesting or more different from the passionate delights of incomplete discovery. A Rap on Race: Margaret Mead and James Baldwin’s Rare Conversation on Forgiveness and the Difference Between Guilt and Responsibility – Brain Pickings. By Maria Popova NOTE: This is the first installment in a multi-part series covering Mead and Baldwin’s historic conversation. 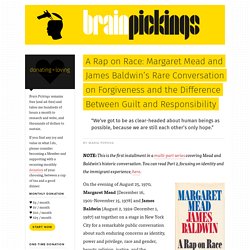 You can read Part 2, focusing on identity and the immigrant experience, here. How to Love: Legendary Zen Buddhist Teacher Thich Nhat Hanh on Mastering the Art of “Interbeing” – Brain Pickings. What does love mean, exactly? 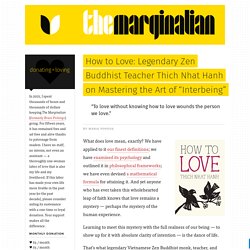 We have applied to it our finest definitions; we have examined its psychology and outlined it in philosophical frameworks; we have even devised a mathematical formula for attaining it. And yet anyone who has ever taken this wholehearted leap of faith knows that love remains a mystery — perhaps the mystery of the human experience. Learning to meet this mystery with the full realness of our being — to show up for it with absolute clarity of intention — is the dance of life. That’s what legendary Vietnamese Zen Buddhist monk, teacher, and peace activist Thich Nhat Hanh (b. October 11, 1926) explores in How to Love (public library) — a slim, simply worded collection of his immeasurably wise insights on the most complex and most rewarding human potentiality. At the heart of Nhat Hanh’s teachings is the idea that “understanding is love’s other name” — that to love another means to fully understand his or her suffering.

Echoing legendary Zen teacher D.T. Mary Oliver on What Attention Really Means and Her Moving Elegy for Her Soul Mate – Brain Pickings. Mary Oliver is one of our era’s most beloved and prolific poets — a sage of wisdom on the craft of poetry and a master of its magic; a woman as unafraid to be witty as she is to wise. 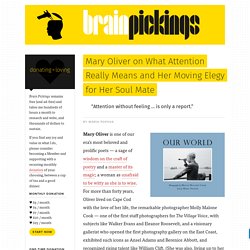 For more than forty years, Oliver lived on Cape Cod with the love of her life, the remarkable photographer Molly Malone Cook — one of the first staff photographers for The Village Voice, with subjects like Walker Evans and Eleanor Roosevelt, and a visionary gallerist who opened the first photography gallery on the East Coast, exhibited such icons as Ansel Adams and Berenice Abbott, and recognized rising talent like William Clift. (She was also, living up to her reputation as “a great Bohemian American,” the owner of a bookshop frequented by Norman Mailer and occasionally staffed by the filmmaker John Waters.)

When Cook died in 2005 at the age of eighty, Oliver looked for a light, however faint, to shine through the thickness of bereavement. Friedrich Nietzsche on Why a Fulfilling Life Requires Embracing Rather than Running from Difficulty. German philosopher, poet, composer, and writer Friedrich Nietzsche (October 15, 1844–August 25, 1900) is among humanity’s most enduring, influential, and oft-cited minds — and he seemed remarkably confident that he would end up that way. 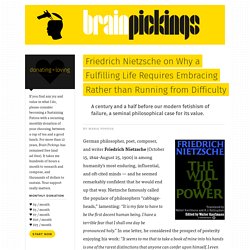 Nietzsche famously called the populace of philosophers “cabbage-heads,” lamenting: “It is my fate to have to be the first decent human being. I have a terrible fear that I shall one day be pronounced holy.” Leisure, the Basis of Culture: An Obscure German Philosopher’s Timely 1948 Manifesto for Reclaiming Our Human Dignity in a Culture of Workaholism – Brain Pickings. “We get such a kick out of looking forward to pleasures and rushing ahead to meet them that we can’t slow down enough to enjoy them when they come,” Alan Watts observed in 1970, aptly declaring us “a civilization which suffers from chronic disappointment.” 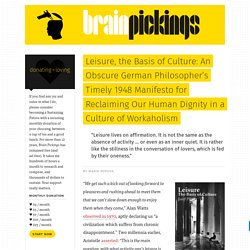 Two millennia earlier, Aristotle asserted: “This is the main question, with what activity one’s leisure is filled.” Today, in our culture of productivity-fetishism, we have succumbed to the tyrannical notion of “work/life balance” and have come to see the very notion of “leisure” not as essential to the human spirit but as self-indulgent luxury reserved for the privileged or deplorable idleness reserved for the lazy. 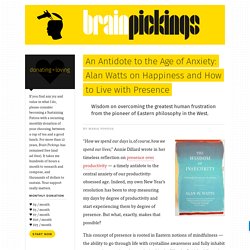 Indeed, my own New Year’s resolution has been to stop measuring my days by degree of productivity and start experiencing them by degree of presence. But what, exactly, makes that possible? This concept of presence is rooted in Eastern notions of mindfulness — the ability to go through life with crystalline awareness and fully inhabit our experience — largely popularized in the West by British philosopher and writer Alan Watts (January 6, 1915–November 16, 1973), who also gave us this fantastic meditation on the life of purpose. If to enjoy even an enjoyable present we must have the assurance of a happy future, we are “crying for the moon.” We have no such assurance. What keeps us from happiness, Watts argues, is our inability to fully inhabit the present: Thanks, Ken. Susan Sontag on Storytelling, What It Means to Be a Moral Human Being, and Her Advice to Writers – Brain Pickings.

Susan Sontag (January 16, 1933–December 28, 2004) spent a lifetime contemplating the role of writing in both the inner world of the writer and outer universe of readers, which we call culture — from her prolific essays and talks on the task of literature to her devastatingly beautiful letter to Borges to her decades of reflections on writing recorded in her diaries. But nowhere did she address the singular purpose of storytelling and the social responsibility of the writer with more piercing precision than in one of her last public appearances — a tremendous lecture on South African Nobel laureate Nadine Gordimer titled “At the Same Time: The Novelist and Moral Reasoning,” which Sontag delivered shortly before her death in 2004.

The speech is included in and lends its title to the endlessly enriching posthumous anthology At the Same Time: Essays and Speeches (public library), which also gave us Sontag on beauty vs. interestingness, courage and resistance, and literature and freedom.