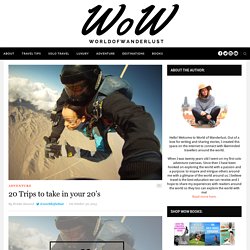 23 World Festivals You Won't Want To Miss. “You don’t need to be rich to travel the World” : Insights from a World Traveler. This week Tripoto sits down with travel blogger and vagabond at large, Jonny Scott Blair for a chat about life as a traveler and blogger and where travel writing is headed. 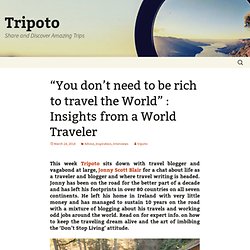 Jonny has been on the road for the better part of a decade and has left his footprints in over 80 countries on all seven continents. He left his home in Ireland with very little money and has managed to sustain 10 years on the road with a mixture of blogging about his travels and working odd jobs around the world. Read on for expert info. on how to keep the traveling dream alive and the art of imbibing the ‘Don’t Stop Living’ attitude.

10 Reasons Why You Need to Go Backpacking At Least Once. By the time I’m writing this, I’ve already sworn off backpacking. 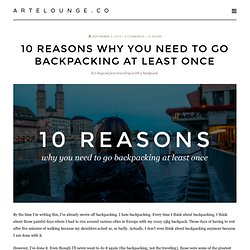 I hate backpacking. Every time I think about backpacking, I think about those painful days where I had to run around various cities in Europe with my crazy 15kg backpack. Those days of having to rest after five minutes of walking because my shoulders ached so, so badly. Actually, I don’t even think about backpacking anymore because I am done with it. However, I’ve done it. Do yourself a favor and buy that damn plane ticket already. “Travel is never a matter of money but of courage. 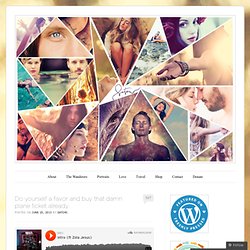 I spent a large part of my youth traveling the world as a hippie. And what money did I have then? None. I barely had enough to pay for my fare. But I still consider those to have been the best years of my youth.The great lessons I learned has been precisely those that my journeys had taught me.” -Paulo Coelho I know you. The truth is, we don’t have that much time. Why not do it now? Excuse # 1: Traveling is too expensive! It’s really not as expensive as you think. The key thing is to prioritize and make travel your number one priority. Stop spending your money on unnecessary things. Why You Need To Travel With Your Partner Before Getting Married. “I have found out there ain’t no surer way to find out whether you like people or hate them than to travel with them.” – Mark Twain Everyone should experience couples travel before getting married. 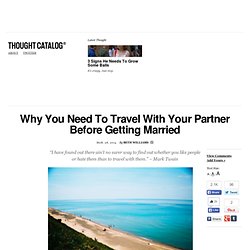 And not just a romantic weekend getaway or 5 nights on an all-inclusive cruise ship. I mean real traveling. Exploring a new country, going on a RTW trip, backpacking through Europe or even up and moving to a new country together can make-or-break your relationship. Now I know some people may argue that it’s no different than living together before marriage – but that’s not the case.

I lived with my fiancé for nearly eighteen months before moving abroad, and in all that time living together, guess what, we never had our first fight until a few months into our travels. Budgeting while abroad can cause tension, navigating a foreign country where you don’t speak the language can be stressful, and being stuck together through the good and the bad, can be enough to make any couple call it quits. Stop What You’re Doing Right Now and Travel. I remember Costa Rica as if it were yesterday. 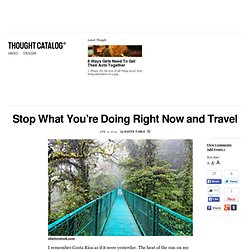 The heat of the sun on my bare skin. The smell of clean, fresh air. The streets alive and vibrant with singing and dancing. The country itself has an infectious feeling of happiness. The kind of happiness that seeps deep into the soul and lights up our recesses that may have grown dark and cold from our routine lives. I remember waking up to bowls of fresh, juicy fruit that tasted as if it had just been picked from the trees. I went exploring in the streets of San Jose where locals sold goods under tents and on the streets for miles. I zip-lined my way through trees in the cloud forests of Monteverde. There is a special place hidden within the cloud forest called the continental divide.

We reached Arenal, a place I climbed several feet of black rocks to reach an end point at a warning sign “Zona Peligrosa”. 7 Signs you Haven't Traveled Enough. Wanderlust – everyone’s claiming to be infected by the incurable disease, but how do you know if you’ve got it for sure? 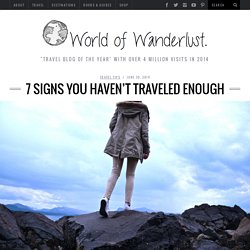 Here are 7 signs you haven’t traveled enough – aimed to inspire and encourage you to travel more often, to more places, and with fewer reasons holding you back. 1. You haven’t explored your own country in its entirety You’ve heard it before – the grass isn’t always greener.