Defending your rights in the digital world 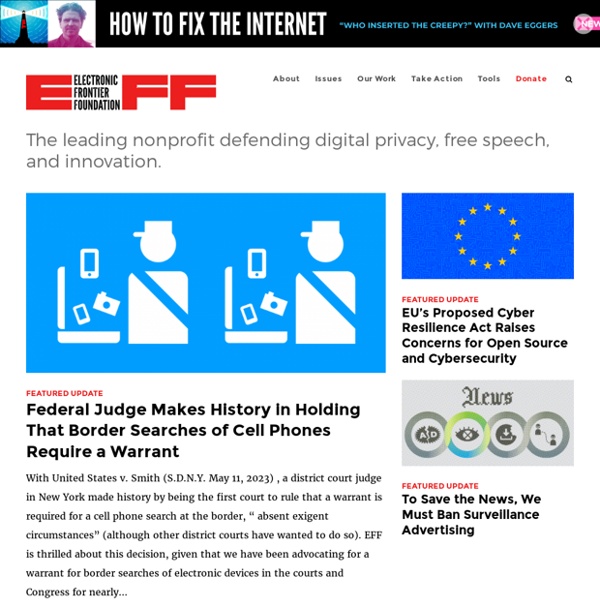 Edueto We lost the pricing…for good! We’ve decided that Edueto should be completely for free. As of today, the pricing is gone, and the full product is available for free. 70% of employers are snooping candidates’ social media profiles Scrolling through your photos from this past weekend and laughing at the debauchery of your Hangover-esque charades? Ranting about your current job or co-workers because you think you're just among "friends?" Think again. According to a new CareerBuilder survey, 70 percent of employers use social media to screen candidates before hiring, which is up significantly from 60 percent in 2016. Wachowicz's Web World: Web Sites for Discerning Finance Students The following financial management web sites are grouped to correspond with the major topic headings in Fundamentals of Financial Management, 13th ed., Pearson Education Limited (2009) by James Van Horne and John Wachowicz. Part I: Introduction to Financial Management | Part II: Valuation Part III: Tools of Financial Analysis and Planning | Part IV: Working Capital Management Part V: Investment in Capital Assets | Part VI: The Cost of Capital, Capital Structure, and Dividend Policy Part VII: Intermediate and Long-Term Financing | Part VIII: Special Areas of Financial Management Glossary Portal |

Is Apple's HomePod Always Listening to You? If you've ever had that uncanny moment where you mention a brand out loud and then see an ad for it on social media hours later, you may be a little suspicious any mics in earshot already. It's happened to me at least a half-dozen times, each time a different brand. Maybe it's coincidence! But even if the eavesdropping isn't happening, it certainly could happen. Trailblazer Project Trailblazer was a United States National Security Agency (NSA) program intended to develop a capability to analyze data carried on communications networks like the Internet. It was intended to track entities using communication methods such as cell phones and e-mail.[1][2] It ran over budget, failed to accomplish critical goals, and was cancelled. The people who filed the IG complaint were later raided by armed Federal Bureau of Investigation (FBI) agents. While the Government threatened to prosecute all who signed the IG report, it ultimately chose to pursue an NSA Senior Executive — Thomas Andrews Drake — who helped with the report internally to NSA and who had spoken with a reporter about the project. Drake was later charged under the Espionage Act of 1917. Background[edit]

50 Kick-Ass Websites You Need to Know About It's time to update the entries in your browser's links toolbar. But with recent estimates putting the size of the internet at well more than 100 million distinct websites, it's getting harder and harder to get a handle on all the great stuff that's out there. That's why we've compiled this list. And unlike some lists you may have seen, which try to name the very "best" websites, but end up just telling you a lot of stuff you already know, we've chosen instead to highlight 50 of our favorite sites that fly under most people's radar.

Protect Kids on the Internet Computers are wonderful learning tools, but they can also expose children to dangers like unwanted content and inappropriate contact from adults through the Internet. Parents, educators and caregivers can limit the danger and help children learn to navigate the Internet safely. By protecting their personal information and being cautious about what they view, families can reduce their risks. Set rules. Know what your kids are doing. Talk to them about the dangers.

Convert Word DOC to HTML This free online word converter tool will take the contents of a doc or docx file and convert the word text into HTML code. It produces a much cleaner html code than the Microsoft Word software normally produces. This doc converter strips as many unnecessary styles and extra mark-up code as it can. Choose better passwords with the help of science August 30, 2017 11.32am BST For years, computer users have been told they should have complicated passwords, including numbers, punctuation marks and other symbols, and upper- and lowercase letters. Despite those being hard to remember, people were told not to write their passwords down, and forced to make up new ones quite frequently. Users dutifully complied – by capitalizing the first letter of their passwords, adding a “1” or their birth year, or perhaps ending their password with an exclamation point. Most people couldn’t actually remember lots of passwords without writing them down, so instead they reused a small number of passwords over and over again. And when they were required to change their passwords, they incremented that “1” to a “2” or added another exclamation point. These simple steps to deal with complicated passwords are so common that they actually make it easier for attackers.

Inside Big Safari, the Air Force’s Top Secret Intel Unit The man on the other line didn’t seem happy. “We are a secretive and shadowy organization that has been in existence for over 60 years,” he said. The man’s name is Col. Edward Topps. He’s the leader of a mysterious Air Force agency known as “Big Safari.” Last month, he called me out of the blue, after I’d written a story about a top-secret spy plane mission.

Four Video Apps To Help Parent/Teacher Communication Teaching is not an easy job. We all know this to be true. I have a sure fire way to make your job easier. Take out your smart phone and take video of the interesting things you do in class. It doesn't even have to be interesting, just take some videos of students doing their regular daily work. You think that's boring? How to Nurture Global Digital Citizenship and Why it Matters to the World One of the questions we’re asked most often is “what is a global digital citizen?” Being a global digital citizen is about more than just being a citizen of Earth. These are leaders, learners, and creators. It’s a way of living well in a world that’s changing fast, and showing others how to do the same. That's why we seek to nurture global digital citizenship in our learners and ourselves: because it matters.

Yes, I'm actively spreading the word about them...about all I can do since I don't have money. They're so very important. by dcoda Dec 14