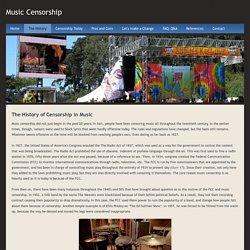 In fact, people have been censoring music all throughout the twentieth century. In the earlier times, though, censors were used to block lyrics that seem hardly offensive today. The rules and regulations have changed, but the basis still remains. Whatever seems offensive at the time will be blocked from reaching people's ears. Even dating as far back as 1927. In 1927, the United States of America's Congress enacted the The Radio Act of 1927, which was used as a way for the government to control the content that was being broadcasted. Russia, China and Turkey top yearly list of music freedom violations. Freemuse monitored and documented violations of freedom of expression for musicians on www.freemuse.org in 2014. 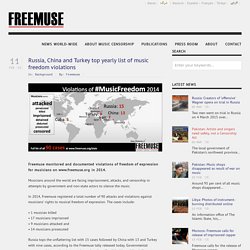 Musicians around the world are facing imprisonment, attacks, and censorship in attempts by government and non-state actors to silence the music. In 2014, Freemuse registered a total number of 90 attacks and violations against musicians’ rights to musical freedom of expression. The cases include: • 1 musician killed • 17 musicians imprisoned • 9 musicians attacked and • 14 musicians prosecuted Russia tops the unflattering list with 15 cases followed by China with 13 and Turkey with nine cases, according to the Freemuse tally released today. Pussy riot trial: 'We are representatives of our generation' They have targeted some of Moscow's most well-secured sites with their flash concerts – the metro, a jail, Red Square – but it was a 40-second performance inside Russia's official church that proved a step too far for a system increasingly intolerant of dissent. 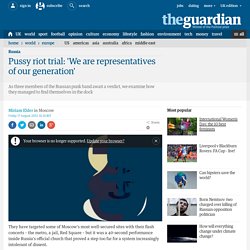 "We are representatives of our generation," Maria Alyokhina told the court in an opening statement that reads like a manifesto, as Pussy Riot went on trial on charges of hooliganism motivated by religious hatred. "It is important for me to understand whether the church is growing along with society or whether it remains a conservative institution. In the search for an answer, I did not expect a repressive and inquisition-like reaction. " Their lawyers called the court hearings worse than a Soviet-era show trial, although the consequences are likely to be less grave.

In a move widely seen as a signal to the court, Vladimir Putin said last week he thought the women should not be judged "too severely". Russia: Creators of ‘offensive’ Wagner opera on trial in Russia. Two men went on trial in Russia on 4 March 2015 over their staging of Richard Wagner’s “Tannhauser” opera, which a senior Orthodox cleric complained was offensive to religious believers. 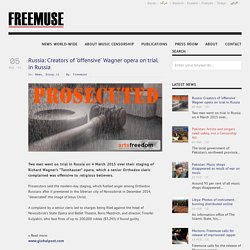 Prosecutors said the modern-day staging, which fuelled anger among Orthodox Russians after it premiered in the Siberian city of Novosibirsk in December 2014, “desecrated” the image of Jesus Christ. USA: Jazz musician suspected as terrorist because of his Arabic name. An American jazz pianist’s Arabic-sounding name allegedly made over-zealous US officials suspect a link between his payment for a performance in Europe and possible terrorist activities. 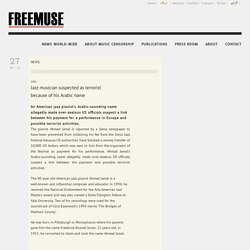 The pianist Ahmad Jamal is reported by a Swiss newspaper to have been prevented from collecting his fee from the Swiss Jazz Festival because US authorities have blocked a money transfer of 10,000 US dollars which was sent to him from the organizers of the festival as payment for his performance. Ahmad Jamal’s Arabic-sounding name allegedly made over-zealous US officials suspect a link between the payment and possible terrorist activities.

The 80-year-old American jazz pianist Ahmad Jamal is a well-known and influential composer and educator. In 1994, he received the National Endowment for the Arts American Jazz Masters award and was also named a Duke Ellington Fellow at Yale University. USA: Hip-hop artist prosecuted for rapping about shootings. The rapper Tiny Doo was charged with “criminal street gang conspiracy” over a music album, ‘No Safety’, reflecting gang culture. 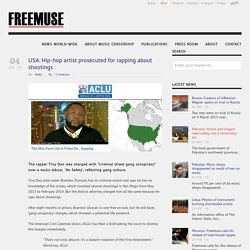 Tiny Doo (real name: Brandon Duncan) has no criminal record and says he has no knowledge of the crimes, which involved several shootings in San Diego from May 2013 to February 2014. But the district attorney charged him all the same because he raps about shootings. After eight months in prison, Brandon Duncan is now free on bail, but he still faces ‘gang conspiracy’ charges, which threaten a potential life sentence. The American Civil Liberties Union, ACLU, has filed a brief asking the court to dismiss the charges immediately. Iran: Prominent musician banned from traveling abroad. The Iranian musician and composer Majid Derakhshani says authorities are preventing him from traveling abroad. 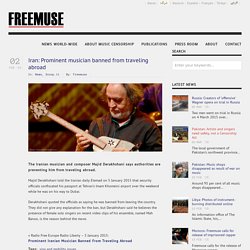 Majid Derakhshani told the Iranian daily Etemad on 5 January 2015 that security officials confiscated his passport at Tehran’s Imam Khomeini airport over the weekend while he was on his way to Dubai. Derakhshani quoted the officials as saying he was banned from leaving the country. Libya: Photos of instrument-burning distributed online. An information office of The Islamic State, Isis, in Libya has published photos of its militants burning musical instruments they said were confiscated in line with the radical group’s interpretation of Sharia law. 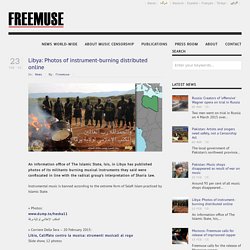 Should censorship in music exist? ScherzingerDoubleVoicesMusicalCensorshipAfter911.pdf. (Working Paper) A Tale of Two Versions: An Ethnographic Study on UK-based Chinese Students’ Experiences with Music Censorship. Nuzum (2001) defined music censorship as ‘any discriminatory act that advocates or allows suppression, control, or banning of music or music-related works against the wishes of its creator or intended audience’. 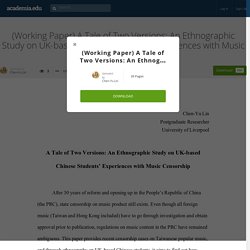 In addition to state control of musical form or content, requests by music companies, media, or music managers for ‘revisions’ of original music may be regarded as censorship as well. Censorship also takes place when parents attempt to provide ‘healthy’, ‘educational’, and ‘uplifting’ music for their children in an effort to protect them from vulgar lyrics and pornography. In the USA, a ‘parental advisory’ alerts parents to objectionable material (Nuzum, 2001). In the PRC and some other countries, sometimes the state plays the parental role by defining and filtering what is not considered appropriate for its citizens. Popular Music Censorship in Africa by Michael Drewett and Martin Cloonan. ΡΕΜΠΕΤΙΚΟΙ ΔΙΑΛΟΓΟΙ: Η λογοκρισία στο ρεμπέτικο τραγούδι. Όταν τα τραγούδια μιλάνε – 10/1/2013 – “Ο δραγουμάνος του βεζίρη”

25 Years After Tipper Gore’s PMRC Hearings, the Opposing Sides Aren’t So Far Apart. Twenty-five years ago yesterday marked the beginning of the infamous PMRC (Parents Music Resource Center) Senate hearings, in which Tipper Gore and a group of concerned "Washington Wives" petitioned to have warning labels put on records or singles that explicitly (and not-so-explicitly) referenced drugs, violence, and/or sex; testifying against the PMRC — and labeling their goals "censorship" and an effort to trample First Amendment rights — was the unlikely trio of Frank Zappa, Dee Snider, and John Denver. 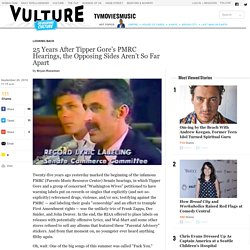 In the end, the RIAA offered to place labels on releases with potentially offensive lyrics, and Wal-Mart and some other stores refused to sell any albums that featured these "Parental Advisory" stickers. And from that moment on, no youngster ever heard anything filthy again. The PMRC Filthy Fifteen. Banned album covers - 30 controversial album covers.