Web censorship: the net is closing in. Every state in the world has its own laws, cultural norms and accepted behaviours. 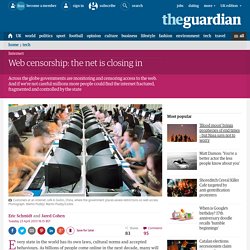 As billions of people come online in the next decade, many will discover a newfound independence that will test these boundaries. Each state will attempt to regulate the internet, and shape it in its own image. The majority of the world's internet users encounter some form of censorship – also known by the euphemism "filtering" – but what that actually looks like depends on a country's policies and its technological infrastructure. Not all or even most of that filtering is political censorship; progressive countries routinely block a modest number of sites, such as those featuring child pornography. In some countries, there are several entry points for internet connectivity, and a handful of private telecommunications companies control them (with some regulation).

NewZealand_Policy. Bill Gates: Internet censorship just won't work. Efforts by countries such as China to restrict the exchange of information on the Internet are ultimately doomed to failure, Microsoft chairman Bill Gates told an audience of Stanford University students Tuesday. 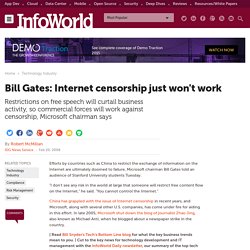 "I don't see any risk in the world at large that someone will restrict free content flow on the Internet," he said. "You cannot control the Internet. " China has grappled with the issue of Internet censorship in recent years, and Microsoft, along with several other U.S. companies, has come under fire for aiding in this effort. In late 2005, Microsoft shut down the blog of journalist Zhao Jing, also known as Michael Anti, when he blogged about a newspaper strike in the country. In the long run, however, free speech will win out, Gates said. That's because of business requirements. Another ambition is to find new ways to drive innovation that will benefit the world's poorest countries. This is a major problem, Gates said. Gates would like to see that change. The Two Internet Freedoms: Framing Victimhood for Political Gain. Censorship Legislation. Films, Videos, and Publications Classification Act 1993/Amendment Act 2005 New Zealand's censorship regime is governed by the Films, Videos, and Publications Classification Act 1993, which was amended by the Films, Videos and Publications Classification Amendment Act 2005. 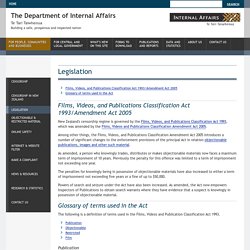 Among other things, the Films, Videos, and Publications Classification Amendment Act 2005 introduces a number of significant changes to the enforcement provisions of the principal Act in relation objectionable publications, images and other such material. As amended, a person who knowingly trades, distributes or makes objectionable materials now faces a maximum term of imprisonment of 10 years. Previously the penalty for this offence was limited to a term of imprisonment not exceeding one year. The penalties for knowingly being in possession of objectionable materials have also increased to either a term of imprisonment not exceeding five years or a fine of up to $50,000. Internet Censorship - law & policy around the world. Last Updated: 28 March 2002 This report contains information on government policy and/or laws regarding Internet censorship in various countries around the world. 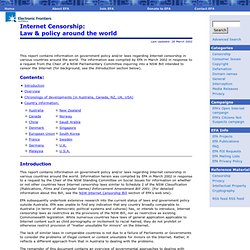 The information was compiled by EFA in March 2002 in response to a request from the Chair of a NSW Parliamentary Committee inquiring into a NSW Bill intended to censor the Internet (for background, see the Introduction section below). Contents: Introduction This report contains information on government policy and/or laws regarding Internet censorship in various countries around the world. EFA subsequently undertook extensive research into the current status of laws and government policy outside Australia. Conference on Internet Freedom.

China blocks final access to Gmail - Technology. China has blocked the last remaining way to access Google's popular e-mail service, experts said yesterday, as authorities there work to establish "Internet sovereignty" by controlling what enters the country via the web. 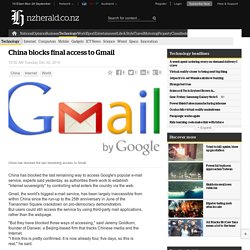 Gmail, the world's biggest e-mail service, has been largely inaccessible from within China since the run-up to the 25th anniversary in June of the Tiananmen Square crackdown on pro-democracy demonstrators.But users could still access the service by using third-party mail applications, rather than the webpage. "But they have blocked those ways of accessing," said Jeremy Goldkorn, founder of Danwei, a Beijing-based firm that tracks Chinese media and the Internet.

"I think this is pretty confirmed. It is now already four, five days, so this is real," he said. Analysts say China operates the world's most extensive and sophisticated Internet censorship system and routinely blocks foreign websites. Another commentator fumed, "Protest the government blocking Gmail! A Brief History of Censorship in New Zealand: Classification in NZ :Office of Film and Literature Classification.

Main content The history of censorship in New Zealand starts early in the 20th Century and involves several different government agencies and a variety of mediums. 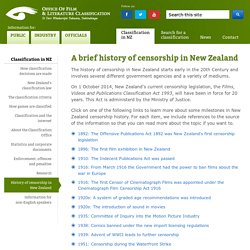 About Filtering. The number of states that limit access to Internet content has risen rapidly in recent years. 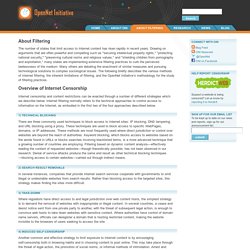 Drawing on arguments that are often powerful and compelling such as "securing intellectual property rights," "protecting national security," "preserving cultural norms and religious values," and "shielding children from pornography and exploitation," many states are implementing extensive filtering practices to curb the perceived lawlessness of the medium. Many others are debating the enactment of similar measures and pursuing technological solutions to complex sociological issues.