(70) The Great Firewall of...America? WTZ! The Game is Rigged: Congress Invites No Consumer Privacy Advocates to its Consumer Privacy Hearing. Meet James Corbett, Political Extremist!!! #PropagandaWatch. The Awakening & How They Wish To Crush It David Icke. Pinterest Censoring Anti-Vaccine Doctors and Pins Related to Vaccine Rights. By Brian ShilhavyEditor, Health Impact News The popular image-sharing social media website Pinterest is blocking pins that provide safety information about vaccines, or question whether or not legislation should be passed to mandate vaccines. 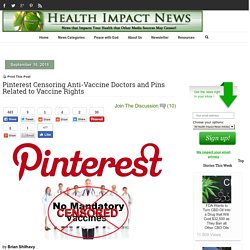 When Health Impact News noticed that some of their pins were no longer showing, we contacted Pinterest to find out why. Someone named “Tina” from Pinterest Help emailed this to Health Impact News: The internet DARK AGES descends upon us. The EU is About to Destroy The Internet #DeleteArt13. Heritage Foundation Defends Facebook's 'Right' to Censor, Will Oppose Regulation. In an interview with Breitbart News, Kitchen argued that as a private company, Facebook has the right to censor content at will, although he strongly cautioned the social network against a censorious approach. 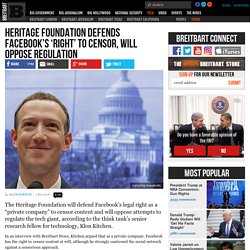 “I think Facebook is a private company,” said Kitchen, a former national security adviser to Sen. Zuckerberg: I'm 'Optimistic' AI Bots Will Flag, Censor 'Hate Speech' Before It's Posted Within 5-10 Years. During his testimony before the Senate on Tuesday, Facebook CEO Mark Zuckerberg said he's "optimistic" that "artificial intelligence tools" will be able to flag "hate speech" immediately within five to ten years. 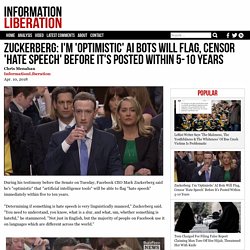 "Determining if something is hate speech is very linguistically nuanced," Zuckerberg said. "You need to understand, you know, what is a slur, and what, um, whether something is hateful," he stammered. YouTube deletes entire Health Ranger video channel; deletes over 1700 videos in latest politically motivated censorship purge (UPDATED) Shots Fired in the Media War! Corbett Report Hit! 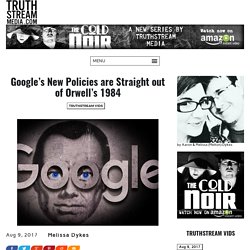 In Orwell’s dystopic vision of the future, there was a huge difference between “truth” — what actually is — and “facts” — what a consensus has been led to believe. Now the search engine giant Google will be delisting and censoring content that doesn’t follow “well-established” scientific, medical, or historical “facts”. YouTube accused of CENSORSHIP over controversial new bid to 'limit' access to videos. YOUTUBE has been accused of censorship after introducing a controversial new policy designed to reduce the audience for videos deemed to be "inappropriate or offensive to some audiences". 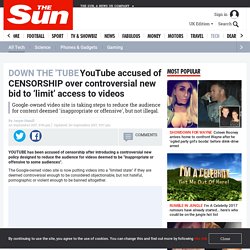 The Google-owned video site is now putting videos into a "limited state" if they are deemed controversial enough to be considered objectionable, but not hateful, pornographic or violent enough to be banned altogether. This policy was announced several months ago but has come into force in the past week, prompting anger among members of the YouTube community. The Sun Online understands Google and YouTube staff refer to the tactic as "tougher treatment". One prominent video-maker slammed the new scheme whilst WikiLeaks founder Julian Assange described the measures as "economic censorship". The YouTube Purge Against Independent News Is HERE. Germany Passes Bill To Fine FaceBook, Twitter Up To $50MM For "Fake News" Germany Considers Fining Facebook $522,000 Per Fake News Item.

The government of Germany is considering imposing a legal regime that would allow fining social networks such as Facebook up to 500,000 euros ($522,000) for each day the platform leaves a “fake news” story up without deleting it. 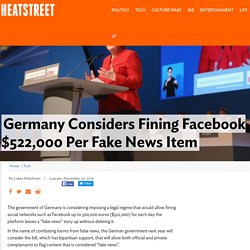 Washington Post Disgracefully Promotes a McCarthyite Blacklist From a New, Hidden, and Very Shady Group. The Washington Post on Thursday night promoted the claims of a new, shadowy organization that smears dozens of U.S. news sites that are critical of U.S. foreign policy as being “routine peddlers of Russian propaganda.” The article by reporter Craig Timberg — headlined “Russian propaganda effort helped spread ‘fake news’ during election, experts say” — cites a report by an anonymous website calling itself PropOrNot, which claims that millions of Americans have been deceived this year in a massive Russian “misinformation campaign.” The group’s list of Russian disinformation outlets includes WikiLeaks and the Drudge Report, as well as Clinton-critical left-wing websites such as Truthout, Black Agenda Report, Truthdig, and Naked Capitalism, as well as libertarian venues such as Antiwar.com and the Ron Paul Institute. Snowden to the World: Stop Letting Facebook Control Your News.

November 17, 2016 | Josie Wales (ANTIMEDIA) In an attempt to rationalize the fact that Donald Trump has been elected as the next president of the United States, a growing movement is lashing out against “fake news sites,” even labeling them responsible for the election results. 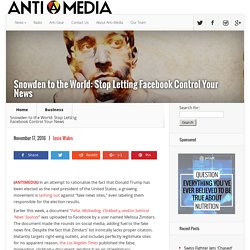 Earlier this week, a document “False, Misleading, Clickbait-y, and/or Satirical ‘News’ Sources” was uploaded to Facebook by a user named Melissa Zimdars. The document made the rounds on social media, adding fuel to the fake news fire. Despite the fact that Zimdars’ list ironically lacks proper citation, blatantly targets right-wing outlets, and includes perfectly legitimate sites for no apparent reason, the Los Angeles Times published the false, misleading, clickbait-y document, lending it an air of legitimacy.

The Censorship Solution. Podcast: Play in new window | Download | Embed Michael Dean of MichaelWDean.com joins us today to discuss the .bit top level domain and how it provides a censorship-resistant alternative to the easily censorable .com, net. and other government-administered top level domains. 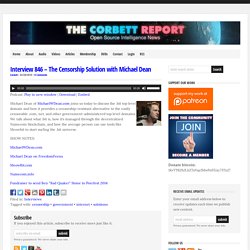 Emergency! Hillary / Globalists Shutting Down Opposition Media. Who controls our news? Welcome to the era of Russian and Chinese information war. Who controls the news? 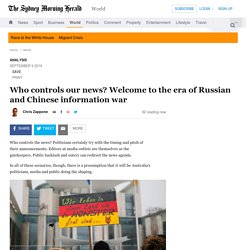 Politicians certainly try with the timing and pitch of their announcements. Editors at media outlets see themselves as the gatekeepers. Public backlash and outcry can redirect the news agenda. How the TPP Could Lead to Worldwide Internet Censorship. The EU is Coming to Close Down Your Free Speech. It is nine months since Angela Merkel and Mark Zuckerberg tried to solve Europe's migrant crisis. 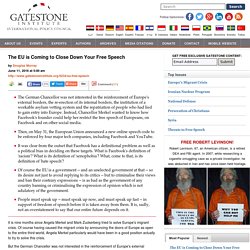 Of course having caused the migrant crisis by announcing the doors of Europe as open to the entire third-world, Angela Merkel particularly would have been in a good position actually to try to solve this crisis. But the German Chancellor was not interested in the reinforcement of Europe's external borders, the re-erection of its internal borders, the institution of a workable asylum vetting system and the repatriation of people who had lied to gain entry into Europe. Instead, Chancellor Merkel was interested in Facebook. Facebook Censors Story About ‘Refugee’ Raping Swedish Woman. Liability Hammer Comes Down on Google, But Hits Users. Yesterday an Australian court found Google liable for defaming someone simply by returning a search result about her. Facebook CEO Mark Zuckerberg caught admitting to plans to censor anti-migrant posts. Michael Coghlan/Flickr By Alex Thomas (INTELLIHUB) — In yet another startling example of Facebook’s increasing power to control public thought, the CEO of the massive social media network was recently caught on mic discussing his plans to censor posts that the sites thought police deem anti-migrant.

The discussion, between Zuckerberg and German Chancellor Angela Merkel, was caught on a hot mic during sideline discussions at the United Nations. The UN Releases Plan to Push for Worldwide Internet Censorship. The United Nations has disgraced itself immeasurably over the past month or so. In case you missed the following stories, I suggest catching up now: The UN’s “Sustainable Development Agenda” is Basically a Giant Corporatist Fraud Not a Joke – Saudi Arabia Chosen to Head UN Human Rights Panel. Facebook Censors Post Revealing Secret Bill to Ban GMO Labeling. Facebook Blocks Alex Jones Account For Posting Image of ISIS Militant.

Months after Infowars warned about social network’s draconian new censorship policies. Facebook Is Now Deciding What News Stories It Wants You To Read. On 22nd January 2015 @ 11.21am © Twitter. Feds Hold Hearing On Whether They Should ‘Regulate’ Sites Like Drudge, Infowars And The Economic Collapse Blog. Economic Collapse | February 12, 2015.

Leader of the Green party MSP Patrick Harvie had asked the Minister about concerns raised by the Open Rights Group (ORG) that the proposals could pave the way for a national ID register in Scotland. Executive Director of ORG, Jim Killock said: U.S. Military Blocks Infowars.com. Twitter Steps Down From the Free Speech Party. In 2012, when Twitter announced in a blog post that it was launching a system that would allow the company to take down content on a country-by-country basis—as opposed to taking it down across the entire Twitter network—EFF defended that decision as the least terrible option.

After all, when a company refuses to comply with an official government request, the government's response is often to block an entire platform. We pointed out that companies cannot be compelled to follow court orders from countries where they do not have significant assets or employees. As a result, we could expect that Twitter would comply only with court orders from the United Kingdom, Ireland, Japan, and Germany. Inquiry into the use of subsection 313(3) of the Telecommunications Act 1997 by government agencies to disrupt the operation of illegal online services. 'Voluntary' oversight for Australian agencies blocking sites.