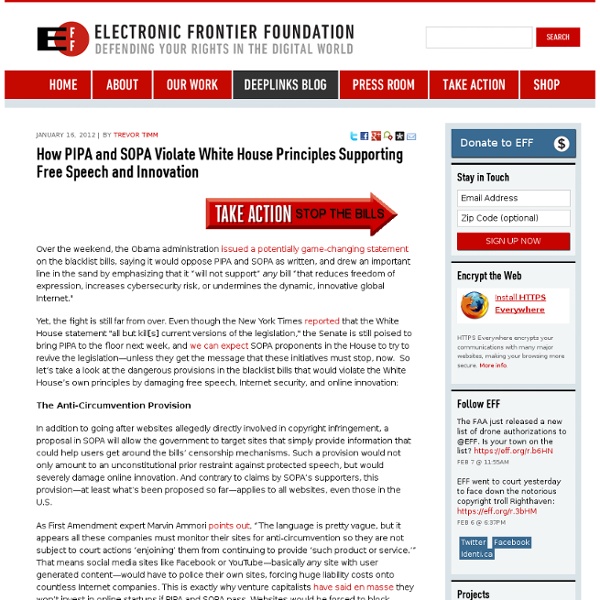 Over the weekend, the Obama administration issued a potentially game-changing statement on the blacklist bills, saying it would oppose PIPA and SOPA as written, and drew an important line in the sand by emphasizing that it “will not support” any bill “that reduces freedom of expression, increases cybersecurity risk, or undermines the dynamic, innovative global Internet." Yet, the fight is still far from over. Even though the New York Times reported that the White House statement "all but kill[s] current versions of the legislation," the Senate is still poised to bring PIPA to the floor next week, and we can expect SOPA proponents in the House to try to revive the legislation—unless they get the message that these initiatives must stop, now. So let’s take a look at the dangerous provisions in the blacklist bills that would violate the White House’s own principles by damaging free speech, Internet security, and online innovation: The Anti-Circumvention Provision The “Vigilante” Provision Related:  Privacy Free Speech Censorship Rights

Controversial Copyright Bills Would Violate First Amendment–Letters to Congress by Laurence Tribe and Me « Marvin Ammori Today, both Professor Laurence Tribe and I submitted letters and legal memoranda to Congress explaining that proposed copyright legislation would violate the First Amendment and be struck down in court. (His letter is available here, and mine is available here.) Who Else Opposes the Bills? Professor Tribe and I both felt compelled to write because of the threat to freedom of speech from the PROTECT IP Act in the Senate and the Stop Online Piracy Act (or SOPA) in the House. Others have also come out to oppose the bills, including the leading civil liberties organizations (at home and abroad), venture capitalists, the leading technology platforms from Facebook and Google to Tumblr and Zynga, and (today) hundreds of entrepreneurs. Who are Professor Tribe and I? Professor Tribe is perhaps the nation’s leading constitutional law expert and among its greatest Supreme Court advocates. Why SOPA and PROTECT IP Violate the First Amendment

White House will propose new digital copyright laws | Privacy Inc. The Obama administration has drafted new proposals to curb Internet piracy and other forms of intellectual property infringement that it says it will send to the U.S. Congress "in the very near future." It's also applauding a controversial copyright treaty known as the Anti-Counterfeiting Trade Agreement, or ACTA , saying it will "aid right-holders and the U.S. government to combat infringement" once it enters into effect. Those disclosures came from a report released today by Victoria Espinel, whom President Obama selected as the first intellectual property enforcement coordinator and was confirmed by the Senate in December 2009. There's no detail about what the proposed law would include, except that it will be based on a white paper of "legislative proposals to improve intellectual property enforcement," and it's expected to encompass online piracy. The usual copyright hawks in Congress applauded the Obama administration's report.

Electronic Frontier Foundation The Electronic Frontier Foundation (EFF) is an international non-profit digital rights group based in the United States. History[edit] Foundation[edit] In April 1990, Barlow had been visited by a U.S. This generated further reaction and support for the ideas of Barlow and Kapor. The Electronic Frontier Foundation was formally founded on July 10, 1990, by Kapor, Gilmore and Barlow. In 1990, Mike Godwin joined the organization as the first staff counsel. Early cases[edit] The creation of the organization was motivated by the massive search and seizure on Steve Jackson Games executed by the United States Secret Service early in 1990. EFF's second big case was Bernstein v. Expansion and development[edit] In early 2010, EFF released this poster in celebration of its founding 20 years before. The organization was originally located at Mitch Kapor's Kapor Enterprises, Inc offices in Cambridge, Massachusetts. DES Cracker[edit] Activities[edit] Litigation[edit] EFF booth at the 2010 RSA Conference

The Definitive Post On Why SOPA And Protect IP Are Bad, Bad Ideas There's been plenty of talk (and a ton of posts here on Techdirt) discussing both SOPA (originally E-PARASITE) and PROTECT IP (aka PIPA), but it seemed like it would be useful to create a single, "definitive" post to highlight why both of these bills are extremely problematic and won't do much (if anything) to deal with the issues they're supposed to deal with, but will have massive unintended consequences. I also think it's important to highlight how PIPA is almost as bad as SOPA. Tragically, because SOPA was so bad, some in the entertainment industry have seen it as an opportunity to present PIPA as a "compromise." It is not. That main issue, we're told over and over again, is "piracy" and specifically "rogue" websites. Thus, the real issue is that this is a business model problem. And, as we've seen with near perfect consistency, the best way, by far, to decrease infringement is to offer awesome new services that are convenient and useful. So...

EU votes in favour of tougher copyright enforcement News The European Parliament has voted in favour of a controversial report that calls for tighter legislation when it comes to enforcing copyright laws. The non-legislative text, drafted by French MEP Marielle Gallo, was adopted by 328 to 245 votes, leaving the way clear for the European Commission to come up with new legislation imposing criminal sanctions across the European Union. France has already criminalised the sharing of copyright files without permission. The report calls for more co-ordination and tighter legislation for the protection of copyrighted material online and says that the existing legal framework has proven 'incapable' in this regard. Critics of the report are extremely concerned that this will allow national authorities to clamp down on private individuals downloading content for non-commercial purposes rather than targeting criminal groups. Civil liberties groups and other critics of the report claim that it puts the interests of big business before individuals' rights.

Wikipedia to shut for 24 hours to stop anti-piracy act EU Parliament calls for pan-EU copyright law High performance access to file storage The European Commission should create a directly enforceable EU-wide copyright law that could be used to bring copyright infringers to book, the European Parliament has said. Current law is not closely harmonised enough, it said. The Parliament has adopted a report from a French MEP which examined the state of intellectual property rights (IPR) enforcement and has recommended the creation of a new European copyright law to help reduce infringement. "[The Parliament] is of the opinion that the possibility of proceeding against infringers of intellectual property rights should be created in the European legal framework," it said. The report, by Marielle Gallo, asks the Commission to review the impact of 2004's Directive on the Enforcement of Intellectual Property Rights, and to propose amendments to it which would strengthen EU powers to tackle infringement. The report was adopted by the Parliament today by a vote of 328 to 245.