Censorship (wikipedia) The practice of suppressing information Censorship is the suppression of speech, public communication, or other information, on the basis that such material is considered objectionable, harmful, sensitive, or "inconvenient. 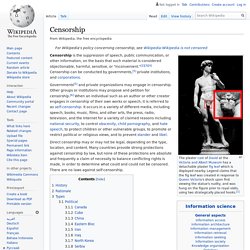 "[2][3][4] Censorship can be conducted by governments,[5] private institutions, and corporations. Governments[5] and private organizations may engage in censorship. Other groups or institutions may propose and petition for censorship.[6] When an individual such as an author or other creator engages in censorship of their own works or speech, it is referred to as self-censorship. 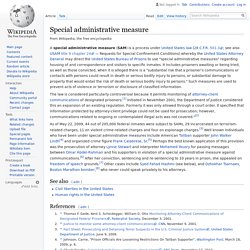 It includes prisoners awaiting or being tried, as well as those convicted, when it is alleged there is a "substantial risk that a prisoner's communications or contacts with persons could result in death or serious bodily injury to persons, or substantial damage to property that would entail the risk of death or serious bodily injury to persons. " Such measures are used to prevent acts of violence or terrorism or disclosure of classified information. See also[edit] References[edit] External links[edit] [44] Chris Hedges &amp; Writer for The Daily Show J.R. Havlan! United States free speech exceptions - Wikipedia. Exceptions to free speech in the United States are limitations on the First Amendment's guarantee of free speech and expression as recognized by the United States Supreme Court. 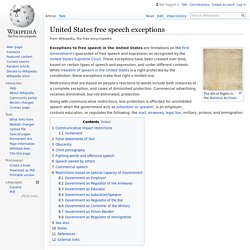 These exceptions have been created over time, based on certain types of speech and expression, and under different contexts. While freedom of speech in the United States is a right protected by the constitution, these exceptions make that right a limited one. Restrictions that are based on people's reactions to words include both instances of a complete exception, and cases of diminished protection. Commercial advertising receives diminished, but not eliminated, protection. Along with communicative restrictions, less protection is afforded for uninhibited speech when the government acts as subsidizer or speaker, is an employer, controls education, or regulates the following: the mail, airwaves, legal bar, military, prisons, and immigration.

Communicative impact restrictions[edit] Dispatches: Film Censorship Case Puts Malaysia’s Rights Record in the Dock. As a member of the UN Human Rights Council in Geneva from 2011 to 2013, Malaysia had plenty of opportunities to hear serious allegations of systematic army abuses in the final days of the civil war against the Liberation Tigers of Tamil Eelam (LTTE). 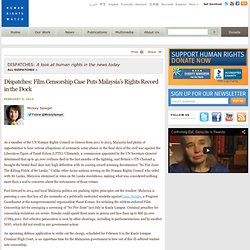 Ultimately, a commission appointed by the UN Secretary-General determined that up to 40,000 civilians died in the last months of the fighting, and Britain’s ITN Channel 4 brought the brutal final days into high definition with its searing award-winning documentary “No Fire Zone: The Killing Fields of Sri Lanka.” Unlike other Asian nations serving on the Human Rights Council who sided with Sri Lanka, Malaysia abstained in votes on Sri Lanka resolutions, making what was considered nothing more than a nod to concerns about the seriousness of those crimes.

Fast forward to 2014 and local Malaysia politics are pushing rights principles out the window. Bloomberg Editor Quits After Story Censored to Protect Corporate Interests. Bloomberg News editor Ben Richardson quit the organization in protest this week, citing the channel’s handling of an investigative piece on China. 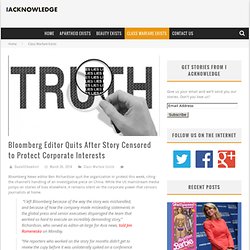 While the US mainstream media jumps on stories of bias elsewhere, it remains silent on the corporate power that censors journalists at home. “I left Bloomberg because of the way the story was mishandled, and because of how the company made misleading statements in the global press and senior executives disparaged the team that worked so hard to execute an incredibly demanding story,” Richardson, who served as editor-at-large for Asia news, told Jim Romenesko on Monday. “the reporters who worked on the story for months didn’t get to review the copy before it was unilaterally spiked on a conference call with a ludicrous amount of top brass.” So what was the story, and why was it spiked? Reporter Michael Forstyhe prepared the article, an investigative piece on China’s elites. Indian Publisher Withdraws Wendy Doninger's The Hindus After Lawsuit. Dismay and anger rippled through India's literary world last week when Penguin India, a major publisher, agreed to withdraw and pulp copies of Wendy Doniger's The Hindus: An Alternative History. 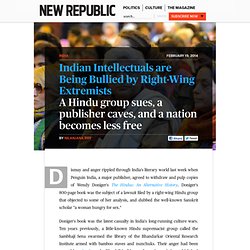 Judge Kozinski Refuses To Even Consider That His Ruling To Censor 'Innocence Of Muslims' On Copyright Grounds May Go Too Far. On Friday, we had posted about Google's motion for an emergency stay on Judge Alex Kozinski's horrific ruling that forced Google to remove all copies of the controversial Innocence of Muslims trailer, based on a bizarre interpretation of copyright law, which gave an actress who appears in 5 seconds of the 13 minute trailer the ability to claim a copyright and take down every copy of the trailer. 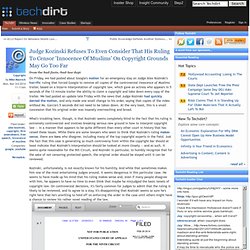 We had posted an update late Friday with the news that Judge Kozinski had quickly denied the motion, and only made one small change to his order, saying that copies of the video without Ms. Garcia's 5 seconds did not need to be taken down. At the very least, this is a small concession that his original order was insanely overreaching and broad. AnonymousVideo: ►#SUPPORT ►Lorax (#AnonOps ... Banned Apps Live Here. LEE CAMP - "Independent media in America is better called... There Are 64 Tiananmen Terms Censored on China's Internet Today - Megan Garber. Google’s “right to be forgotten” response is “disappointingly clever” Daniel Ellsberg: Snowden would not get a fair trial – and Kerry is wrong. John Kerry was in my mind Wednesday morning, and not because he had called me a patriot on NBC News. 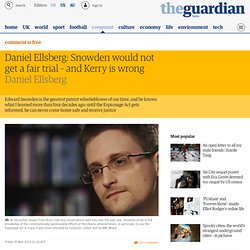 I was reading the lead story in the New York Times – "US Troops to Leave Afghanistan by End of 2016" – with a photo of American soldiers looking for caves. I recalled not the Secretary of State but a 27-year-old Kerry, asking, as he testified to the Senate about the US troops who were still in Vietnam and were to remain for another two years: How do you ask a man to be the last man to die for a mistake? Daniel Ellsberg: Snowden would not get a fair trial – and Kerry is wrong. Censorship. Censorship. Censorship and Selectivity. Sensors, surveillance & privacy. Censorship (The Isreal Palistine Conflict) University Free Speech Debates. Not So Free Speach, Money Talks. Political Corectness. Forces in Politics.