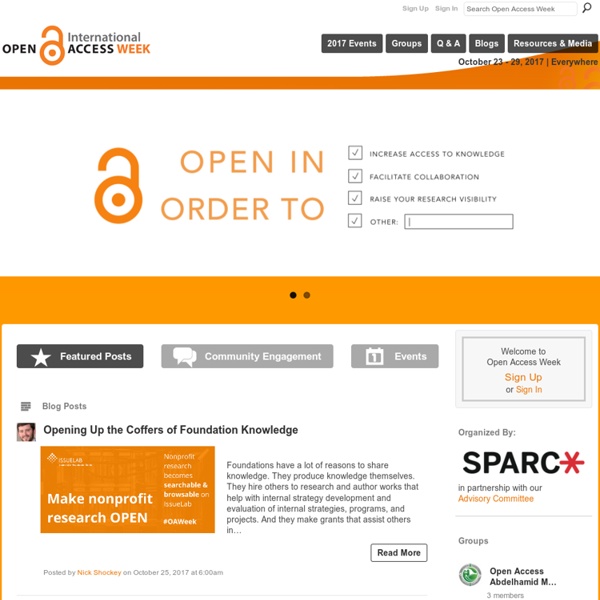 Exploring open access in higher education Open access is using internet technology to facilitate teaching, learning and research the world over. Photograph: ESA/J.Huart/PA From the use of social media to engage students to tools designed to facilitate record keeping in HE, it would seem the academic revolution will be digitised. But arguably no other aspect of digital holds the promise of the open access (OA) philosophy and open educational resources (OER). The Public Library of Science sums up the appeal of the open agenda rather neatly, saying: "Open access stands for unrestricted access and unrestricted reuse. Paying for access to content makes sense in the world of print publishing, where providing content to each new reader requires the production of an additional copy, but online it makes much less sense to charge for content when it is possible to provide access to all readers anywhere in the world."

How I Published My Scholarly Book With an Open Access CC-BY License [Open Access Week in 2014 is October 20-26.] Have you noticed that scholarly books are getting more and more expensive? It’s not just the journals that are exorbitantly priced. Yesterday I didn’t buy a really interesting anthology in my field because it cost over $100.

Open Access Timeline Physical Review X 4 May 2011 American Physical Society officially launched PRX, a online-only, open access journal, Scientific Reports 6 Jan 2011 Nature launched Scientific Reports, online and open access journal covering all areas of the natural sciences Why I Publish Open Access? “Open Access makes research freely available to everyone, including researchers in developing countries” “My Open Access article had impact beyond my core subject” “I want the public to be able to read my research – they funded it after all!” These are just a few of the reasons we’ve heard from authors about why publishing articles Open Access is so important to them. Echo Research and Practice is the first open access journal in echocardiography, exciting news for anyone working in cardiac ultrasound imaging.

Open educational resources UNESCO believes that universal access to high quality education is key to the building of peace, sustainable social and economic development, and intercultural dialogue. Open Educational Resources (OER) provide a strategic opportunity to improve the quality of education as well as facilitate policy dialogue, knowledge sharing and capacity building. Open Educational Resources are teaching, learning or research materials that are in the public domain or released with an intellectual property license that allows for free use, adaptation, and distribution. In 2001, the Massachusetts Institute of Technology (MIT), in an unprecedented move, announced the release of nearly all its courses on the internet for free access.

Net Neutrality 101 When we log onto the Internet, we take lots of things for granted. We assume that we'll be able to access whatever Web site we want, whenever we want to go there. We assume that we can use any feature we like -- watching online video, listening to podcasts, searching, e-mailing and instant messaging -- anytime we choose. We assume that we can attach devices like wireless routers, game controllers or extra hard drives to make our online experience better.

Open science now! Michael Nielsen on TED Playlist Space oddity, indeed: 18 talks from astronauts, including Chris Hadfield Chris Hadfield, the Canadian astronaut who’s become a YouTube sensation aboard the International Space Station, has showed us why tears won’t fall in space and the dangers of clipping one’s fingernails in zero gravity. Science Europe – cOAlition S On 4 September 2018, a group of national research funding organisations, with the support of the European Commission and the European Research Council (ERC), announced the launch of cOAlition S, an initiative to make full and immediate Open Access to research publications a reality. It is built around Plan S, which consists of one target and 10 principles. cOAlition S signals the commitment to implement, by 1 January 2020, the necessary measures to fulfil its main principle: “By 2020 scientific publications that result from research funded by public grants provided by participating national and European research councils and funding bodies, must be published in compliant Open Access Journals or on compliant Open Access Platforms.”

60+ educational resources for teaching yourself anything. From its inception, the web has always had appeal as an educational resource. Recognising the potential for remote learning, in 2002, the launch of OpenCourseWare at MIT helped propel the initiative into the spotlight, with many universities following suit and providing quality educational material available through the web. No longer is there an excuse for anyone with access to the web to say that education is outside of their reach.

Meet the Robin Hood of Science The tale of how one researcher has made nearly every scientific paper ever published available for free to anyone, anywhere in the world. On the evening of November 9th, 1989, the Cold War came to a dramatic end with the fall of the Berlin Wall. Four years ago another wall began to crumble, a wall that arguably has as much impact on the world as the wall that divided East and West Germany.

A Basic Guide for OER/Home From WikiEducator The Commonwealth of Learning (COL) is an intergovernmental organisation created by Commonwealth Heads of Government to encourage the development and sharing of open learning and distance education knowledge, resources and technologies. The United Nations Educational, Scientific and Cultural Organization (UNESCO) was founded on 16 November 1945. UNESCO is a specialized United Nations agency promoting international cooperation among its Member States and Associate Members in the fields of education, science, culture and communication. The designations employed and the presentation of material throughout this publication do not imply the expression of any opinion whatsoever on the part of UNESCO concerning the legal status of any country, territory, city or area or of its authorities, or concerning the delimitation of its frontiers or boundaries. Commonwealth of Learning, 2011