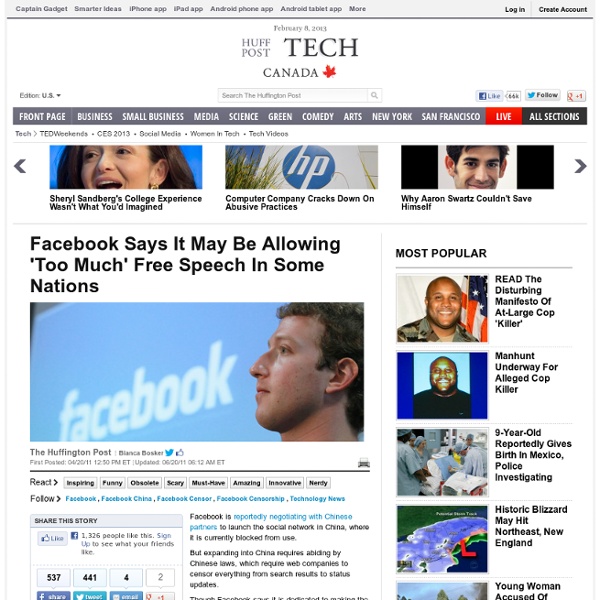 Look who's watching: it's not the FBI, it's Facebook Even the most sophisticated security agencies could not have dreamed up something like Facebook ... "Your friends have a lot in common with you, it’s your friends who betray you." Photo: Bloomberg The CV you'd rather the boss didn't see Stored inside a series of ordinary brick buildings beside a sprawling wasteland on the edge of San Francisco Bay are intimate details of your life, relationships and opinions. This information repository is not the headquarters of the FBI or CIA, but Facebook Inc, Mark Zuckerberg's multibillion-dollar social networking behemoth with access to more than 840 million people, and their data.

Facebook's Eerie Goal: Why Timeline Changes Everything For those out of the loop, Facebook just introduced the Timeline at its recent F8 Conference. Besides the obvious changes in aesthetics thanks to the Sofa acquisition, Timeline alters everything from the purpose of the Facebook profile, to the way Facebook is pushing users to rethink their own privacy. TechCrunch recently published an article about Why The Timeline Changes Nothing.

Nik Cubrilovic Blog - Logging out of Facebook is not enough Important Update: Facebook has responded and issued a fix for this issue. See the follow up blog post "Facebook Fixes Logout Issue, Explains Cookies" Dave Winer wrote a timely piece this morning about how Facebook is scaring him since the new API allows applications to post status items to your Facebook timeline without a users intervention. It is an extension of Facebook Instant and they call it frictionless sharing. Pentagon Wants a Social Media Propaganda Machine You don’t need to have 5,000 friends of Facebook to know that social media can have a notorious mix of rumor, gossip and just plain disinformation. The Pentagon is looking to build a tool to sniff out social media propaganda campaigns and spit some counter-spin right back at it. On Thursday, Defense Department extreme technology arm Darpa unveiled its Social Media in Strategic Communication (SMISC) program. It’s an attempt to get better at both detecting and conducting propaganda campaigns on social media.

It’s the end of the web as we know it « Adrian Short 25 September 2011 When you own a domain you’re a first class citizen of the web. A householder and landowner. What you can do on your own website is only very broadly constrained by law and convention. You can post the content you like. You can run the software you want, including software you’ve written or customised yourself.

Facebook Listens. RSS Added Back to Pages. Will Twitter be next? In perhaps one of my most controversial articles (unintentionally), I wrote a week or two ago about how both Twitter and Facebook both quietly removed RSS from user accounts and Pages. Of course, with Facebook, on user accounts that made sense since they were intended to be private, but with Pages, 100% public versions of the site, it didn't make sense that they would remove the links and access to be able to subscribe to updates via RSS. It appears that Facebook listened though, as there is now a "Subscribe via RSS" link on Facebook Pages, and the source now links to an atom feed for clients that want to auto-discover the feeds. You can see it by looking down at the bottom left on any Page now.

I Have Seen The Future, And Its Sky Is Full Of Eyes Allow me just a little self-congratulatory chest-beating. Four years ago I started writing a near-fiction thriller about the risks of swarms of UAVs in the wrong hands. Everyone I talked to back then (including my agent, alas) thought the subject was implausible, even silly.

BandRx: A Free Page Management App for Musicians That Matches Facebook’s Design BandRx is the latest tool to emerge in the musician Facebook Page management space. Utilizing a modular design, BandRx gives bands flexibility in terms of functionality while retaining Facebook’s design principles. The small company saw leading musician Page management tools from RootMusic and Reverbnation pushing Pages to look more like MySpace and wanted to build a product with a white and blue style that better matched Facebook. In response to the decline of MySpace, the former home of band profiles on the internet, several developers have begun competing to host musicians as they migrate to Facebook. RootMusic’s BandPage is currently the biggest, with 1.5 million daily active users, followed by ReverbNation’s Band Profile with 504,000 DAU. Meanwhile, some companies such as DamnTheRadio, recently acquired by FanBridge, are doing more custom app development work for the world’s most popular bands.

On Facebook, deleting an app doesn’t delete your data from their system Facebook announced some intended changes to its data use policy to "enhance transparency", according to a Friday post on its Facebook and Privacy page. The updates include better explanations, examples, and "tips" denoted in the text with a lightbulb, as well as some revelations about how third parties deal with users' data. In the revised data use policy, Facebook makes explicit that any time one of your Facebook friends starts using an app, game, or partner website (that is, a site where you can log in using Facebook credentials), Facebook hands that service all of the "publicly available" information on that user. Information that is always publicly available only includes basic stuff like your name or cover photo, but users can have their entire profile publicly available, and thus handed to a service.

CNET CNET (stylized as c|net) is an American media website that publishes reviews, news, articles, blogs, podcasts and videos on technology and consumer electronics globally. Founded in 1994 by Halsey Minor and Shelby Bonnie, it was the flagship brand of CNET Networks and became a brand of CBS Interactive through CNET Networks' acquisition in 2008.[2][3][4][5] CNET originally produced content for radio and television in addition to its website and now uses new media distribution methods through its Internet television network, CNET Video, and its podcast and blog networks. In addition CNET currently has region-specific and language-specific editions. These include the United Kingdom, Australia, China, France, Germany, Japan, Korea and CNET en Español.

Gov't may track all UK Facebook traffic The UK government is considering the mass surveillance and retention of all user communications on social-networking sites including Facebook, MySpace, and Bebo. Home Office security minister Vernon Coaker said on Monday that the EU Data Retention Directive, under which ISPs must store communications data for 12 months, does not go far enough. Communications such as those on social networking sites and instant messaging could also be monitored, he said.