Clay Shirky: Defend our freedom to share (or why SOPA is a bad idea) 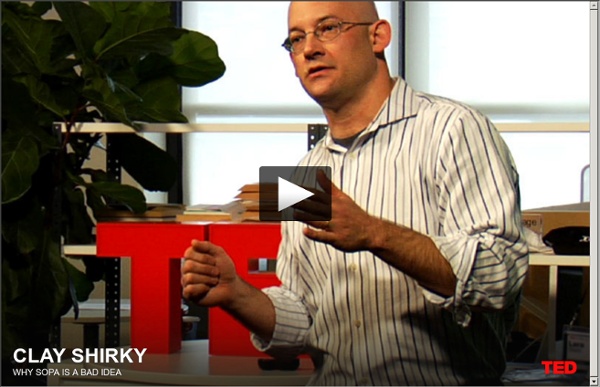 What I Wish Wikipedia and Others Were Saying About SOPA/PIPA The SOPA/PIPA blackout today by Wikipedia, Mozilla, WordPress.com and many other sites is (I hope) drawing attention to proposed legislation that is considered a threat to "Internet freedom." That's fine, admirable, and (with any luck) will be effective at curbing SOPA/PIPA for at least another legislative season. The backgrounders I've read so far by Wikipedia and others explain pretty well why SOPA/PIPA shouldn't pass. What they don't say is that SOPA/PIPA are business as usual, and the protest is a last-ditch effort necessary because the legislative system and mainstream media are fundamentally broken.

In praise of cooperation without coordination: Clay Shirky at TEDGlobal 2012 Amy Cuddy must be proud: Clay Shirky walks on stage and promptly strikes a power pose. Then he tells us of a 9-year-old Scottish girl who lives about 50 miles from here. Martha Payne started the foodblog NeverSeconds, for which she took her camera into school to document her lunches, using metrics such as “pieces of hair found in food.” Two decades of the web: a utopia no longer Evgeny Morozov traces the development of the web from the laboratories of the Cold War to the world of venture capital and big money The “virtual community”: an idea that was the antithesis of Cold War paranoia The internet is a child with many fathers. It is an extremely complex multi-module technology and each module—from communication protocols to browsers—has a convoluted history.

SOPA explained: What it is and why it matters - Jan. 17 SOPA's backers say the sweeping anti-piracy bill is needed to squash sites like The Pirate Bay (left), but the tech industry says the bill is rife with unintended consequences. NEW YORK (CNNMoney) -- The tech industry is abuzz about SOPA and PIPA, a pair of anti-piracy bills. Here's why they're controversial, and how they would change the digital landscape if they became law. What is SOPA? SOPA is an acronym for the Stop Online Piracy Act. Spartan Blades knives blades combat utility, Knives with Intent Welcome to Spartan Blades—Producing quality knives for the modern warrior and outdoorsman. Spartan Blades, a veteran / service disabled-owned company, was formed by two retired U.S. Army Special Forces NCO's ("Green Berets") to design, make and deliver finely crafted knives. • Whether you are a military / law enforcement professional, outdoorsman, or simply a person that appreciates quality knives, Spartan Blades endeavors to create knives that meet your needs. • Spartan Blades is dedicated to the design and creation of innovative and functional knives. • Made in North Carolina, USA of only the highest quality materials (US origin), all Spartan Blades knives are produced with an attention to detail rarely found.

The Internet Spoke and, Finally, Congress Listened! The misguided proponents of the disastrous Internet blacklist bills have blinked. Today, Senator Harry Reid announced he would postpone a cloture vote on PIPA scheduled for next Tuesday, which means, as a practical matter, that the bill is dead for now. Shortly after that announcement, Representative Lamar Smith issued a statement conceding PIPA's evil House stepsister, the Stop Online Piracy Act (SOPA), also wasn't ready for prime time. This is great news, and it is a direct result of this week's mass protests. Mapping GitHub – a network of collaborative coders GitHub is a large community where coders can collaborate on software development projects. People check code in and out, make edits, etc. Franck Cuny maps this community (with Gephi), based on information in thousands of user profiles.

Connected Citizens: The Power, Potential and Peril of Networks Ten years ago, a tiny web site asked people to volunteer to write their own encyclopedia. Today, Wikipedia is the most widely used reference work in the world. Rapid advances in digital media and technology are changing how we connect to information and each other. The way we engage in public dialogue, coordinate, solve problems—all of it is shifting. PIPA/SOPA and Why You Should Care Congress is considering the most talked-about copyright legislation in a decade, known as Protect IP (PIPA) in the Senate and Stop Online Piracy (SOPA) in the House. Today, Mozilla announced that we’ll join with other sites in a virtual strike to protest PIPA/SOPA. SOPA makes all of us potential criminals if we don’t become the enforcement arm of a new government regulatory and policing structure.

50 Lessons I wish I had learned earlier Welcome to our blog! Here you'll find bits and pieces of wisdom learned from cycling 17,000 miles from Alaska to Argentina together as a family. Hope it inspires you to live your dream! My book about our journey, Changing Gears, is now released! Read a preview here Now that I’m old and gray (but not quite in my rocker yet!)

#BlackoutSOPA: How 87,000 People Taught Us About The Future of Online Activism [Editor’s Note: The Stop Online Piracy Act, the House bill that wants to give content holders vast new powers to block web sites in the name of copyright protection, has been delayed despite an extensive lobbying campaign. The reason was widespread online opposition. Hunter Walk, co-creator of #BlackoutSOPA, explains in the article below how his site was able to help rally web users to the cause -- and hit upon the new reality of activism in the process.]