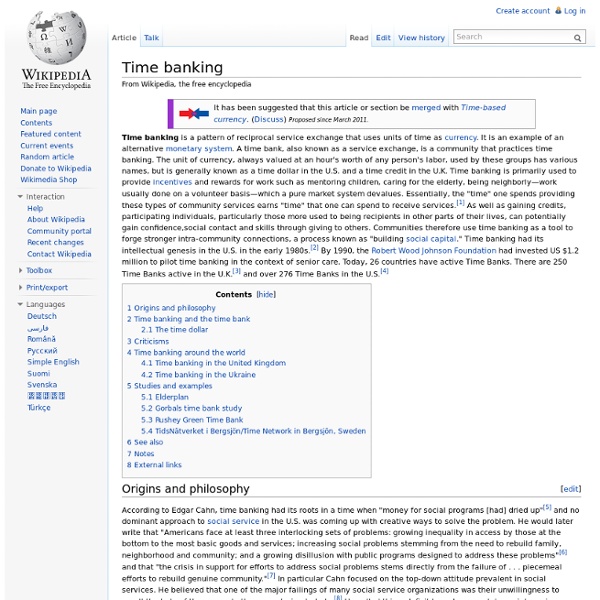 Time banking is a pattern of reciprocal service exchange that uses units of time as currency. It is an example of a complementary monetary system. A time bank, also known as a service exchange, is a community that practices time banking. The unit of currency, always valued at an hour's worth of any person's labor, used by these groups has various names, but is generally known as a time dollar in the USA and a time credit in the UK. Time banking is primarily used to provide incentives and rewards for work such as mentoring children, caring for the elderly, being neighborly—work usually done on a volunteer basis—which a pure market system devalues. Origins and philosophy[edit] According to Edgar S. As a philosophy, time banking also known as Time Trade[11] is founded upon five principles, known as Time Banking's Core Values:[12] Everyone is an assetSome work is beyond a monetary priceReciprocity in helpingSocial networks are necessaryA respect for all human beings The time dollar[edit] Dr. Related:  Sharing/Open source

Peer-to-peer lending Peer-to-peer lending (also known as person-to-person lending, peer-to-peer investing, and social lending; abbreviated frequently as P2P lending) is the practice of lending money to unrelated individuals, or "peers", without going through a traditional financial intermediary such as a bank or other traditional financial institution. This lending takes place online on peer-to-peer lending companies' websites using various different lending platforms and credit checking tools. Overview[edit] The interest rates are set by lenders who compete for the lowest rate on the reverse auction model, or are fixed by the intermediary company on the basis of an analysis of the borrower's credit.[1] Borrowers assessed as having a higher risk of default are assigned higher rates. Lenders mitigate the individual risk that borrowers will not pay back the money they received by choosing which borrowers to lend to, and mitigate total risk by diversifying their investments among different borrowers.

Dog Boarding Just Got Awesome! | DogVacay WeCar - Car Sharing Programs for Business, University and Individual Use Task & Errand Service By Awesome, Trustworthy People | TaskRabbit OpenPlans | Helping cities work better. Category:Science Science needs to learn to accommodate this qualitative realm, and learn to understand it - not quantitatively, but qualitatively. This requires new methods and ways of thinking for science -- not outside of a (limited) science, but within an expanded one. - Michael Mehaffy This section should cover both scientific concepts about P2P (network theory and such), but also the use of P2P practices within the field of science. Ported so far are three first columns of the Encyclopedia and the Resources section. The three most important aspects of an Open Science model are: 1) Open Access to scientific journals; 2) access to the raw material as Open Data; and 3) access to the transparent Open Process of the research methodologies itself. Or [1]: Transparency in experimental methodology, observation, and collection of data. John Wilbanks insists that: Open Science differs from Open Source Software!! See also concerning methodology: The Participatory Turn in Research‎, i.e. Read also (needs updating):

Peer-to-peer A peer-to-peer (P2P) network in which interconnected nodes ("peers") share resources amongst each other without the use of a centralized administrative system Peer-to-peer (P2P) computing or networking is a distributed application architecture that partitions tasks or work loads between peers. Peers are equally privileged, equipotent participants in the application. They are said to form a peer-to-peer network of nodes. Peers make a portion of their resources, such as processing power, disk storage or network bandwidth, directly available to other network participants, without the need for central coordination by servers or stable hosts.[1] Peers are both suppliers and consumers of resources, in contrast to the traditional client-server model in which the consumption and supply of resources is divided. Historical development[edit] Therefore, a distributed messaging system that is often likened as an early peer-to-peer architecture was established: USENET. Applications[edit]

Peer Governance If peer to peer is the relational dynamic at play in distributed networks, and peer production the process whereby common use value is produced, then peer governance refers to the way peer production is managed. See also the related concept of Panarchy Vasilis Kostakis: "Peer governance is a new mode of governance and bottom-up mode of participative decision-making that is being experimented in peer projects, such as Wikipedia and FLOSS (Bauwens, 2005a, and 2005b). Thus peer governance is the way that peer production, the process in which common value is produced, is managed." "Peer governance’s main characteristics are the Equipotentiality, i.e. the fact that in a peer project all the participants have an equal ability to contribute, although that not all the participants have the same skills and abilities (Bauwens, 2005a, and 2005b); the Heterarchy as a form of community; and the Holoptism i.e. the ability for any part to know the whole (Deleuze, 1986). 2. Typology of Commons Regulation

The Peer to Peer Search Engine: Home About the Conference Integral City 2.0: An Online Conference September 4 – 27, 2012 -- Live Event Presentations September 28 – Ongoing -- Resources, Action-Research, and Dialogue We hold a radically optimistic vision for our collective future... And we know that creating the global solutions so many hope for will require the perspectives, expertise, and passion of many people. We put our heads and hearts together during this online conference, and ongoingly now, in a bold commitment to co-creating a brighter future for the entire human hive. Take part in this exploration Our online conference began in September 2012, featuring 50 visionaries, designers, teachers, and leading-edge practitioners from different industries, city sectors, and academic disciplines, from all over the world, starting a conversation about the future of cities. And it's still open for your learning and involvement. Your voice is important. Why was this conference and the ongoing action-research dialogue created? Week 1: “Planet of Cities”