The Other 99, Ustream.TV: -Twitter- @Timcast @TheOther99 This channel is being maintained by The Other 99. We continue to be a primary source from the 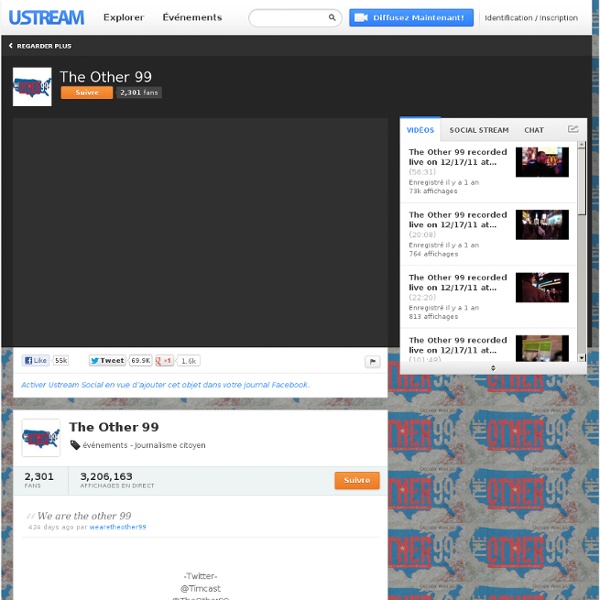 Cops stop ‘Occupy’ storming at Trinity Church  Bryan Smith for New York Daily News The church-owned lot was the scene of arrests last month when some demonstrators tried to take over the space after the NYPD removed them from Zuccotti Park. About 100 Occupy Wall Street protesters flooded the Trinity Church property they had vowed to take over in lower Manhattan on Saturday but were quickly pursued by police. The protesters, who were gathering all day next to the lot, erected and climbed over portable wooden steps in the late afternoon in a bid to “reoccupy.” Retired New York Espiscopal Diocese Bishop George Packard — once a military chaplain in Iraq — was the first over the chain-link fence that surrounded the lot and the first one arrested. Others soon followed. Once they were inside area, said Mike Sweeney, 22, the scene turned to chaos. “I just saw everyone starting to run,” said Sweeney, of Williamsburg, Brooklyn. “[Police\] came in with the clubs out and ready to hit people. He said he escaped by going under the fence.

anoncorpwatch Interview with creator of Occupy Wall Street "bat-signal" projections during Brooklyn Bridge #N17 march REUTERS/Jessica Rinaldi Earlier this evening, tens of thousands of Occupy Wall Street protesters marched throughout New York City, many making their way on to the Brooklyn Bridge, carrying LED candles and chanting. As Occupiers took the bridge in a seemingly endless sea of people, words in light appeared projected on the iconic Verizon Building nearby: "99% / MIC CHECK! / LOOK AROUND / YOU ARE A PART / OF A GLOBAL UPRISING / WE ARE A CRY / FROM THE HEART / OF THE WORLD / WE ARE UNSTOPPABLE / ANOTHER WORLD IS POSSIBLE / HAPPY BIRTHDAY / #OCCUPY MOVEMENT / OCCUPY WALL STREET / list of cities, states and countries / OCCUPY EARTH / WE ARE WINNING / IT IS THE BEGINNING OF THE BEGINNING / DO NOT BE AFRAID / LOVE." A few hours later I spoke with Mark Read, who organized the "bat-signal" project. XJ: How did this come together? Mark Read: It came up at an action coordination meeting. I said, I think I can do that. I knew I wanted to throw it on the Verizon Building. She wouldn't take my money.

OccupyStreams.org VIDEO: Mass Arrests Of Occupiers At Duarte Square Josh Harkinson Updated December 18th at 9:00 a.m. For weeks, Occupy Wall Street has been talking about occupying a vacant lot next to Duarte Square in SoHo. On Saturday, it walked the talk. After Packard tumbled over the fence, he climbed onto a wooden bench and waved for the crowd to follow. Here's Packard discussing it all with fellow occupiers while riding to jail in a paddy wagon: That morning, things had gotten off to an ominous start when police detained and arrested Zach, one of the organizers, while he was walking across a nearby public park. Occupy Wall Street had a variety of motivations for occupying the lot, which is owned by Trinity Church but not currently being used for anything. Organizers chose December 17th to move on the lot because it marks the one-year anniversary of the self-immolation of Mohamed Bouazizi--the Tunisian fruit vendor who is credited with sparking the Arab Spring--and the three-month anniversary of OWS.

Democracy Now Open Letter to Chancellor Linda P.B. Katehi | UCDavis Bicycle Barricade 18 November 2011 Open Letter to Chancellor Linda P.B. Katehi Linda P.B. Katehi, I am a junior faculty member at UC Davis. You are not. I write to you and to my colleagues for three reasons: 1) to express my outrage at the police brutality which occurred against students engaged in peaceful protest on the UC Davis campus today 2) to hold you accountable for this police brutality 3) to demand your immediate resignation Today you ordered police onto our campus to clear student protesters from the quad. What happened next? Without any provocation whatsoever, other than the bodies of these students sitting where they were on the ground, with their arms linked, police pepper-sprayed students. What happened next? Police used batons to try to push the students apart. This is what happened. You are responsible for it because this is what happens when UC Chancellors order police onto our campuses to disperse peaceful protesters through the use of force: students get hurt. Sincerely, Like this:

GRASSROOTS MAPPING Post written by Oscar Brett Arriving at Zucotti Park in downtown Manhattan, the site of #Occupy#Wallstreet, you can feel the energy of the crowd. The level of diversity (ideological/ ethnic/ generational) is unbelievable. The Occupation of Wall Street began on September 17th and it is getting stronger each day. I see my involvement in the park as that of a community builder and artist. The maintenance of a community at Zucotti park is an incredibly important thing; no matter how disparate the media claims the thousands of occupiers to be, there is one thing for certain — they are a community made up of individual people, with varying goals and intentions, voicing their dissent for the systemic problems of the world. This project would have been impossible without the help of Leif Percifield and Liz Barry. Upon arrival at the park the next day I linked up with the #Occupy#Wallstreet media working group and began preparation for the flight. –Oscar Brett

OWS Campers: What Can We Occupy Next? Protesters occupy a Bank of America branch in downtown San Francisco, California. See the rest of Mother Jones photo editor Mark Murrman's photos of the incident here . What will the evicted residents of Zuccotti Park occupy next? Will it be Duarte Plaza, a triangular patch of brick and gravel owned by Trinity Church in Tribeca? Foreclosed and abandoned buildings in Harlem and the Lower East Side? Nearby colleges or small towns? At a 40-person meeting Saturday to discuss the issue, not everyone thought that retaking a public space would be worthwhile. Others argued that OWS has a duty to revive the country's first and most symbolic occupation. Even before last week's police raid and eviction of campers from the park, the movement's organizers were working to set up satellite occupations around the city. "The idea of an occupation is obviously to hold it and grow it," says Sandy Nurse. Duarte Plaza: Ask Now, Take Later? "We came to declare our solidarity with this movement," said Rev.

Inside Occupy Wall Street's Next Occupation At first glance, Occupy Wall Street's plan to take over a gravel lot in SoHo tomorrow seems a bit strange. After all, the property isn't all that close to Wall Street. It's owned by Trinity Church, which hardly seems like the kind of symbolic target that OWS found in Brookfield Office Properties, the politically connected owner of Zuccotti Park. And the occupiers have already gotten free food and meeting spaces from Trinity; they now risk the appearance of biting the hand that feeds them. Of course, organizers behind #D17, as the occupation attempt is known on Twitter, see things differently. "We are not against the church," says #D17 organizer Shawn Carrie. The Trinity Church parcel, which sits along Canal Street next to the publicly owned Duarte Plaza, has been slated for occupation by OWS even before the eviction from Zuccotti Park. Still, it's far from clear how tomorrow's occupation will play with the public.