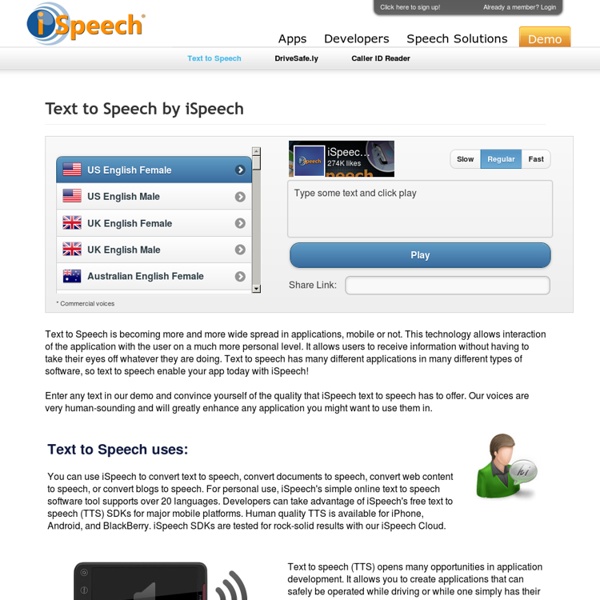 Text to Speech is becoming more and more wide spread in applications, mobile or not. This technology allows interaction of the application with the user on a much more personal level. It allows users to receive information without having to take their eyes off whatever they are doing. Text to speech has many different applications in many different types of software, so text to speech enable your app today with iSpeech! Enter any text in our demo and convince yourself of the quality that iSpeech text to speech has to offer. Our voices are very human-sounding and will greatly enhance any application you might want to use them in.

Scuola - Intel® Galileo, first steps and the Internet of Things Paraimpu is a social platform for the Internet (of Things). It allows you to quickly connect your smart things and boards, manage and interconnect them to create your IoT apps, also defining data transformation rules and to build your personal Internet of Things in a simplified, smart way. To experiment with this tutorial you need a Paraimpu account: you can create yours for free here. Acapela Box : create your text to speech messages 1. Your Acceptance of Terms Welcome to the Acapela-Box Website. The following Terms of Service (“TOS”) are between you and Acapela Group and constitute a legal agreement that governs your use of the Acapela-Box Website (referred to as the “Service”). You must agree to these TOS before you can use the Service by clicking the ‘Yes I agree button’ on the Sign Up page.

IntelGalileo/IntelGalileoGPIO Programming GPIO pins on Intel Galileo Description: Tutorial Level: INTERMEDIATE Intro This should work with either the Yocto or Debian setup. Set up Intel Galileo - Programming GPIO From Linux - Malinov Family Web Presence Most of GPIO capabilities of Galileo board are exposed through Linux Sysfs interface, and can be controlled using file based I/O. I will show how to use some of these capabilities using simple shell commands. Of course instead of shell you can implement I/O using file manipulations from your program written using your favorite programming language. Digital GPIO - Sysfs Interface The following command gives information about GPIO in the system and shows if an IO port was allocated to a module or Sysfs (user). root@clanton:~# cat /sys/kernel/debug/gpio

Galileo Experiment Guide - learn.sparkfun.com Contributors: hello_techie Introduction A temperature sensor is exactly what it sounds like – a sensor used to measure ambient temperature. This particular sensor has three pins – a positive, a ground, and a signal. This is a linear temperature sensor. DHT workaround for Galileo and Galileo Gen2 usi... The main reason the DHT temperature and humidity sensor does not work with the Galileo is because of the tight requirements of one-wire device like the DHT11 and DHT22 sensors. With just one wire, DHT and many other one-wire devices will not work with the Galileo because the Galileo takes too much time when switching a pin from one direction to another. This is because the Galileo uses IO expanders for the gpio that controls the pin direction and those IO expanders are connected to the Galileo via I2C.

Intel-NTU Connected Context Computing Center Intel® Galileo is an Arduino-compatible application development board based on Intel® Quark X1000 SoC, which is a 32-bit Pentium-class application processor. The hardware and software compatibilities to Arduino shields design makes Galileo a rapid prototyping platform for innovative algorithms and techniques. A light weight Yocto Project Linux was also released to run on Galileo; however, due to the nature of the light weight OS, the functions available are limited. Ifconfig dhcp : Configure your DHCP from the command line Linux/UNIX based systems offer an assortment of commands to their users to help them set up local networks as well as connect to the internet. The ifconfig command is the DHCP utility program that is found in Unix-based operating systems. It allows you to configure your TCP/IP address parameters, and to control and query it in general. If you’re familiar with Windows operating systems, you might recognize the ipconfig command that lets you access the Windows DHCP client. The ifconfig command in UNIX is similar to the ipconfig command. If you’re new to Linux and are unfamiliar with the basics, you can take this introductory course to Linux.

Intel Galileo: Setting Up WiFi The Intel Galileo comes with an Ethernet port, that you can use to connect to the internet. But sometimes you want to connect to the Internet without wires. WiFi lets you place your Galileo anywhere, without having to run a wire back to a router, and connect to your host machine or the internet. Parts: Intel N13WiFi / Bluetooth 1/2 Length PCI Card. (Amazon)Half to Full Height Mini PCI Express (PCI-E) Card Bracket Adapter.

Raspberry Pi Temperature and Light Sensor Required 2 x DS18B20, 2 x 4.7k resistor The DS18B20 is a rather useful sensor because you can read more than one of them using the same GPIO pin. The Raspberry Pi is able to recognise the input from each separate sensor. This system is called “1-wire”, although the sensor still needs power and GND connections.

How to: Create a Raspberry Pi weather station: Part 1 The Raspberry Pi has a number of features that make it ideal for real-world projects. It’s cheap, small and rugged, and it needs only a modest power supply. Here, we’re going to discover how to turn a Pi into a climate-monitoring station that can take measurements of the temperature, air pressure and light levels outside, and save them in a form you can then analyse using a spreadsheet program such as the common Microsoft Excel. We’re also going to cover how to connect to Dropbox, so that our project can share its results across multiple devices. Finally, we’re going to look at how to use a Raspberry Pi without a keyboard, monitor or mouse, so that you can use your Pi in a wide range of small-scale projects. This project assumes a certain degree of familiarity with Raspbian and the principles of creating programs in Python, but especially advanced skills aren’t required.