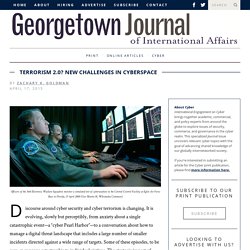 It is evolving, slowly but perceptibly, from anxiety about a single catastrophic event—a “cyber Pearl Harbor”—to a conversation about how to manage a digital threat landscape that includes a large number of smaller incidents directed against a wide range of targets. Some of these episodes, to be sure, may prove catastrophic to individual victims. The strategic impact of proliferating cyber challenges, however, is more likely to be felt in their accumulated effect on our economic interests over time than in a single catastrophic event targeting American infrastructure. A Subtle Shift in Discourse Cyber Terrorism? Cyber-Enabled Terrorism Terrorism 2.0? 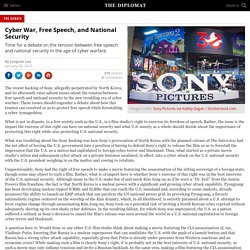 By Jongsoo Lee for The Diplomat January 06, 2015 Facebook225 Twitter74 LinkedIn8 The recent hacking of Sony, allegedly perpetrated by North Korea, and its aftermath raise salient issues about the tension between free speech and national security in the new troubling era of cyber warfare. What is not in dispute, in a free society such as the U.S., is a film studio’s right to exercise its freedom of speech. What was troubling about the Sony hacking was how Sony’s provocation of North Korea with the planned release of The Interview had the net effect of forcing the U.S. government into a position of having to defend Sony’s right to release the film so as to forestall the impression that the U.S. as a nation had capitulated to foreign cyber terror and blackmail. Freedom-of-expression-and-internet-regulation. 3 Freedom of expression and the Internet. Freedom of Expression on the Internet. Kuwait: Cybercrime Law a Blow to Free Speech. 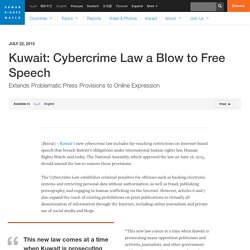 The National Assembly, which approved the law on June 16, 2015, should amend the law to remove these provisions. The Cybercrime Law establishes criminal penalties for offenses such as hacking electronic systems and retrieving personal data without authorization, as well as fraud, publishing pornography, and engaging in human trafficking via the Internet. However, articles 6 and 7 also expand the reach of existing prohibitions on print publications to virtually all dissemination of information through the Internet, including online journalism and private use of social media and blogs. Article 6 imposes prison sentences and fines for insulting religion and religious figures, and for criticizing the emir over the Internet. Key Concerns and Recommendations. From Gutenberg to the Internet Free Speech, Advancing Technology, and the Implications for Democracy, by Russell L. WeaverFree Speech in an Internet Era Papers from the Free Speech Discussion Forum, Edited by Clive Walker and Russell L. Weaver.

Controversial cyberbullying law passes. • New cyberbullying law will create a criminal offence of intentionally causing harm by posting a digital communication, punishable by up to two years' imprisonment or a maximum fine of $50,000. • Complaints can be made to an approved agency, which will attempt to resolve the issue and may contact companies like Google to get material taken down. 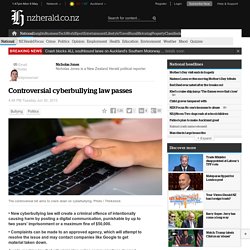 A wide-reaching law that will criminalise online communications deemed deliberately harmful has passed into law - despite unexpected and last minute opposition. The Harmful Digital Communications Bill has passed its third reading, 116 votes in favour to 5 votes against. The controversial law is designed to crack-down on cyber-bullying, but opponents have warned it is too vague and could be used as a weapon against free speech. Act Party leader David Seymour was expected to be the only MP to vote against the legislation, after reluctant support from Labour and the Greens. Continued below. 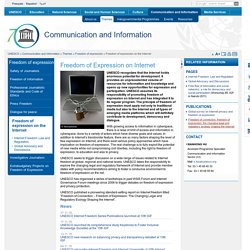 It provides an unprecedented volume of resources for information and knowledge and opens up new opportunities for expression and participation. UNESCO assumes its responsibility of promoting freedom of expression on Internet and has integrated it to its regular program. The principle of freedom of expression must apply not only to traditional media but also to the Internet and all types of emerging media platforms which will definitely contribute to development, democracy and dialogue. With growing access to information in cyberspace, there is a raise of limit of access and information in cyberspace, done by a variety of actors which have diverse goals and values. In addition to Internet’s transborder feature, there are so many factors shaping the level of free expression on Internet, and there exist various policy approaches which have implication on freedom of expression.