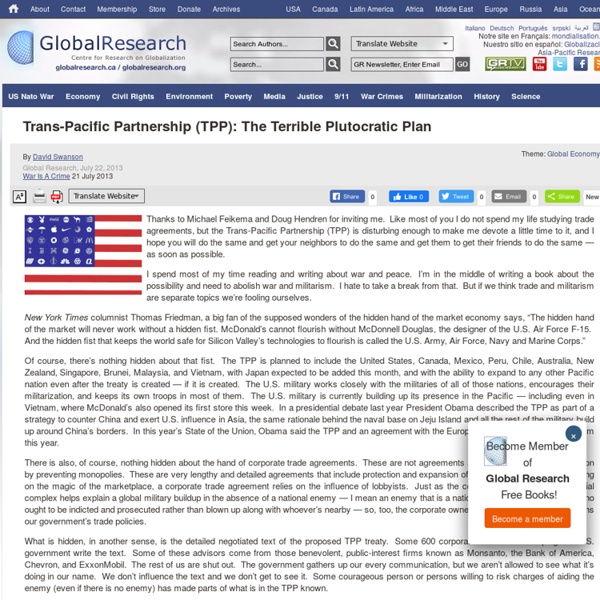 Thanks to Michael Feikema and Doug Hendren for inviting me. Like most of you I do not spend my life studying trade agreements, but the Trans-Pacific Partnership (TPP) is disturbing enough to make me devote a little time to it, and I hope you will do the same and get your neighbors to do the same and get them to get their friends to do the same — as soon as possible. I spend most of my time reading and writing about war and peace. I’m in the middle of writing a book about the possibility and need to abolish war and militarism. I hate to take a break from that. But if we think trade and militarism are separate topics we’re fooling ourselves. New York Times columnist Thomas Friedman, a big fan of the supposed wonders of the hidden hand of the market economy says, “The hidden hand of the market will never work without a hidden fist. Of course, there’s nothing hidden about that fist. There is also, of course, nothing hidden about the hand of corporate trade agreements. § Destroy family farms Related:  To Know & Learn • Politics of Freedom • Controlling the World

Policy Responsiveness to Public Opinion - Political Science Some authors offer general discussions of the process of democratic responsiveness in the United States. Burstein 2003 offers one general review of the literature on democratic representation. Manza and Cook 2002 contrasts research that finds evidence of large responsiveness with literature that argues that the public has a limited role in policymaking. Hurley and Hill 2012 presents the issues involved in estimating responsiveness and the causal structure responsible. Shapiro 2011 reviews research on public opinion and its role in democratic representation. As for mechanisms, Miller and Stokes 1963 provides the classic paradigm of how constituencies can influence their representatives’ behavior. Burstein, Paul.

untitled According to wikipedia, Globalisation is the process of international integration arising from the interchange of world views, products, ideas and other aspects of culture. However, over the last ten years there has been a sea change decline in all the indicators that would measure the success of this model. Democracy, economic growth, freedom and an interchange of world views and culture has all but been abandoned to a vice like grip of globalisation driven more by the corporate principles of power and greed resulting in war, terrorism, a biblical refugee crisis, fear and a fully co-opted media. The Economist has just published its annual index on democracy. In the meantime, Freedom House have published their annual Freedom Index that makes for just as sobering reading. Unsurprisingly, ratings for the Middle East and North Africa region were the worst in the world during the course of 2015, followed closely by Eurasia. Conflicts of interest have massively increased in the last decade.

The NSA’s SKYNET program may be killing thousands of innocent people In 2014, the former director of both the CIA and NSA proclaimed that "we kill people based on metadata." Now, a new examination of previously published Snowden documents suggests that many of those people may have been innocent. Last year, The Intercept published documents detailing the NSA's SKYNET programme. According to the documents, SKYNET engages in mass surveillance of Pakistan's mobile phone network, and then uses a machine learning algorithm on the cellular network metadata of 55 million people to try and rate each person's likelihood of being a terrorist. Patrick Ball—a data scientist and the director of research at the Human Rights Data Analysis Group—who has previously given expert testimony before war crimes tribunals, described the NSA's methods as "ridiculously optimistic" and "completely bullshit." SKYNET works like a typical modern Big Data business application. Even handset swapping gets detected and flagged, the slides boast.

MAI: Anti-Democratic International Treaty On Investment Reprinted from The Common Good, no 6, Advent 1997 www.catholicworker.org.nz MAI: Anti-Democratic International Treaty On Investment Bill Rosenberg Do we ever stop to consider what state our democracy is in? Despite colourful rhetoric, the broad policies of all five recent governments have been very similar. If there really are fewer policy choices available, the real problem is that the politicians we elect have been disempowered, and are willingly disempowering future elected representatives from making the real changes the public want. A little publicised international agreement the government is currently negotiating illustrates this point radically. Multilateral Agreement on Investment (MAI) The international agreement I refer to deals with foreign investment. Yet the impact of the agreement, if signed, will be profound. MAI: all rights and no responsibilities The purpose of the MAI is to restrict a government’s right to regulate foreign investment. What can you do?

The Second Bush Plan for a Fascist Coup of the USA By Salem-News.com News from US Citizens Against Fascism (WASHINGTON D.C.) – In 1933 Prescott Bush, who made the Bush fortune in Nazi Germany, attempted a Fascist coup in the United States on behalf of himself and various corporations. He wanted a system like Hitler’s and Mussolini’s here. He was not executed or imprisoned. The House Un-American Acttivies committee did nothing. George H W Bush was a CIA agent when Kennedy was assassinated and is associated with the scene in Dallas, was director of the CIA when a “Chilean government assassin …. killed a Chilean dissident and an American woman with a car bomb in Washington, D.C., and George H.W. Clarence Thomas was also in place to help put George W Bush into office as an unelected president. GW Bush presided over 9/11, the largest attack on the US in its history and blamed on Muslims. Moreover, declassified U.S. Read full article Donate to Help Make a Difference Tags: george hw bush, george w bush, nazi Category: Conspiracies

A Rockefeller explains: Why I lost faith in Exxon Mobil, and donated my shares My great-grandfather, John D. Rockefeller Sr., created the Standard Oil Company and I inherited shares in the companies it spun off, including Exxon Mobil. But this year I donated those shares to the nonprofit Rockefeller Family Fund's Environmental program, which sold them and is using the $400,000 proceeds to fight global warming. I lost faith in Exxon Mobil's future value. A prime reason is that Exxon's valuation is based largely on the immense untapped reserves of oil and gas it owns. And yet if future generations are to inherit a livable world, most of those reserves must stay in the ground. Cynics may say that foreknowledge of the dire consequences won't stop humanity from using this fossil fuel. Internally, though, the company continued to accept the validity of the science it had helped pioneer. Way back in 1982 Exxon Mobil's environmental affairs office printed a primer on climate change marked “not to be distributed externally.” It's time to give the DWP a reboot

This transatlantic trade deal is a full-frontal assault on democracy | George Monbiot Remember that referendum about whether we should create a single market with the United States? You know, the one that asked whether corporations should have the power to strike down our laws? No, I don't either. Mind you, I spent 10 minutes looking for my watch the other day before I realised I was wearing it. Forgetting about the referendum is another sign of ageing. The purpose of the Transatlantic Trade and Investment Partnership is to remove the regulatory differences between the US and European nations. The mechanism through which this is achieved is known as investor-state dispute settlement. The Australian government, after massive debates in and out of parliament, decided that cigarettes should be sold in plain packets, marked only with shocking health warnings. During its financial crisis, and in response to public anger over rocketing charges, Argentina imposed a freeze on people's energy and water bills (does this sound familiar?). You don't believe it?

Medical Profession Has Been Bought Out