The closing of American academia 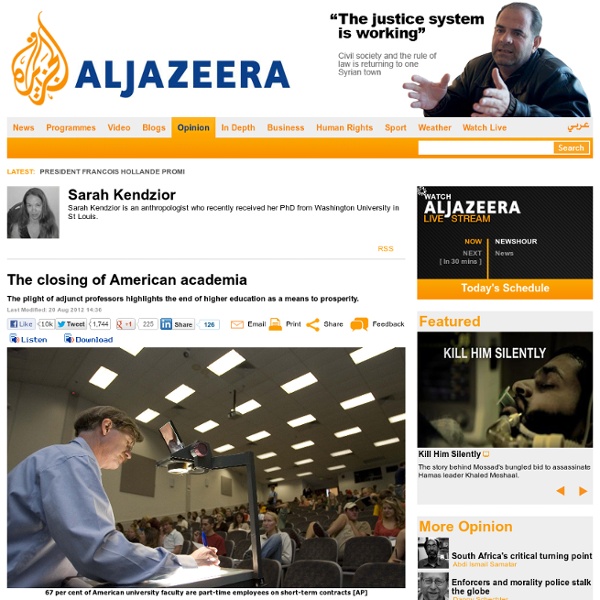 It is 2011 and I'm sitting in the Palais des Congres in Montreal, watching anthropologists talk about structural inequality. The American Anthropological Association meeting is held annually to showcase research from around the world, and like thousands of other anthropologists, I am paying to play: $650 for airfare, $400 for three nights in a "student" hotel, $70 for membership, and $94 for admission. The latter two fees are student rates. The theme of this year's meeting is "Traces, Tidemarks and Legacies." My friend is an adjunct. According to the Adjunct Project, a crowdsourced website revealing adjunct wages - data which universities have long kept under wraps - her salary is about average. Why is my friend, a smart woman with no money, spending nearly $2000 to attend a conference she cannot afford? Below poverty line In most professions, salaries below the poverty line would be cause for alarm. The value of a degree Academia is vaunted for being a meritocracy. Related:  Freedom and true Democracy

Oil giant Saudi Aramco back online after 30,000 workstations hit by malware Aramco, Saudi Arabia's national oil company, said on Sunday that the company was back in operation ten days after a massive malware outbreak hobbled 30,000 workstations at the company. In a statement on the company's Facebook page (content alert: Facebook page contains images of extremely phallic architecture), Aramco said that it had "restored all its main internal network services" that were affected by a malware outbreak on August 15. The attack was attributed to "external sources." It is just the latest against a national oil company, following reports of malware attacks on Iran's oil infrastructure linked to the "Flame" malware in May. Aramco said employees returned to work on August 25 and resumed "normal business," though the company is blocking remote access to company resources as a precaution. The malicious Trojan horse, which Sophos named Troj/MDrop-ELD, attempts to overwrite the master boot record on infected systems, which would make it impossible to boot the machine.

Chile cracks down on violent student protest - Americas Police have used water cannons to break up a protest in Chile's capital, Santiago, by thousands of students demanding free education, and hooded vandals set ablaze three city buses amid violence that left dozens arrested and injured. Chile's government said student leaders cannot be exempt from responsibility for the burning of the Transantiago mass transit system buses in Wednesday's protest, during which 75 people were arrested and 49 policemen were injured. "The leaders are opening the doors to vandalism and delinquency," presidential spokesman Andres Chadwick said. "How much more should we put up with these illegal marches that call on school takeovers and that threaten a violent August? What does that have to with education?" The crisis over education reform in Chile remains unresolved despite more than a year of demonstrations by students, teachers and families. Damages to public transport "It's unacceptable," said transportation minister Pedro Pablo Errazuriz.

Analysis: Akin row shows GOP's social-fiscal rift TAMPA, Fla. (AP) — Every now and then, an event awakens the ever-slumbering tensions between the Republican Party's two core wings: social conservatives and corporate interests. A Missouri congressman's comment about rape and pregnancy was one such moment, and it came just as Republicans were hoping for a united front at their convention to nominate Mitt Romney for president. A full-blown rupture — such as the one at the 1992 convention, when a defeated candidate declared a national "culture war" — seems unlikely. But even a modest squabble between key party factions might raise concerns in a tight presidential race. Romney joined other mainstream Republicans in denouncing the Aug. 19 remarks by Rep. Romney called Akin's comments "offensive and wrong." Like many other top Republicans, Romney stopped short of criticizing Akin's stand on abortion, as opposed to his comments about rape and conception. Romney would allow abortions in instances of rape and incest. View gallery

How Did This Happen? by Daniel Luzer August 22, 2012 6:08 PMHow Did This Happen? By Daniel Luzer What’s wrong with the American university today? Many people now understand that college has become dramatically more expensive than in past years, and that indebted graduates are now struggling to find jobs and having trouble paying for those expensive educations. But it wasn’t always like that. College students have perhaps always been troublesome, but in past years they certainly weren’t so desperate. Colleges might have created college students like this on purpose, argues Debra Leigh Scott, an adjunct professor at Temple University. Maybe American businesses want graduates who are desperate, eager to find jobs, and willing to sacrifice anything just to pay the bills. Let’s go back to post World War II, 1950s when the GI bill, and the affordability — and sometimes free access — to universities created an upsurge of college students across the country. So far, so good, for students at least. How did they do that?

Security tip: Before being interviewed on TV, wipe passwords off whiteboard Over 170,000 people are part of the Sophos community on Facebook. Why not join us on Facebook to find out about the latest security threats. Hi fellow Twitter user! Follow our team of security experts on Twitter for the latest news about internet security threats. Already using Google+? Filed Under: Featured , Privacy The following screenshot is from a broadcast on TVP (Polish television). Spot anything interesting? No? Let's take a closer look.. If you haven't already guessed, Hasło is the Polish for "Password". As we have explained before , if a TV crew is visting your office it may be sensible to remove any passwords which could appear in the background. In fact, maybe it makes sense not to have these passwords on show of whether someone is pointing a video camera around the place or not. Just saying.. Follow @gcluley <a href=" Our Poll</a> Graham Cluley is senior technology consultant at Sophos.

Think Voter ID Laws Couldn't Cost You Your Vote? Think Again. A 93-year-old great-great grandmother who alleges she will be disenfranchised by Pennsylvania's recently enacted voter ID law heads to trial on Wednesday. In legal action backed by the ACLU and NAACP, Viviette Applewhite claims she no longer possesses any of the documents she needs to get a photo ID. Without it, she won't be able to cast a ballot this November in the Keystone State. It's the latest clash in an ongoing back-and-forth between voter ID advocates and opponents. Voter ID supporters argue that identification requirements for registered voters helps prevent voter fraud, ensuring the integrity of elections. Adversaries say the ID requirements stand as a solution in search of a problem. The U.S. While voter ID proponents maintain that new provisions requiring photo identification are sensible and not overburdensome, despite some evidence to the contrary, the situation isn't always so simple. Loading Slideshow PennsylvaniaYou're an average voter in Pennsylvania. Also on HuffPost:

Haute Couture In The ‘Ivory Tower’ By Guest Contributor Dr. Tanisha C. Ford Southern Methodist professor Willard Spiegelman, from New York Times “Class Acts” spread. A New York Times Magazine spread titled “Class Acts,” featuring six professors styled in designer fashions, recently resurfaced in the social media sphere largely due to the media’s budding interest in fashion in unexpected workplaces. I instantly took to my Twitter and Facebook pages to post the “Class Acts” spread for my diverse group of colleagues to weigh in on. But even after our insightful social-media venting session, I was still bothered by the spread. From slavery to the present, African Americans and other people of color have used fashion as a form of cultural-political resistance and creative self-expression. After emancipation, some former bondwomen and men began wearing flamboyant outfits full of color as a means of resistance. During the Civil Rights Movement, a politics of adornment was employed to garner media attention for the movement.

Guide to shooting better online video The Canon Vixia HV40. Tips on video equipment, interviewing people on camera & more Target audience: Nonprofits, social change organizations, videographers, educators, foundations, businesses, individuals. This is part of Creating Media, our ongoing series designed to help nonprofits and other organizations learn how to use and make media. Guest post by Diana DayOnline Journalism Review With the increasingly affordable equipment and editing tools available today, it’s possible to turn out professional-looking online video quicker than you’d expect. You can hire an outside video producer, but we think the tools have become simple enough to bring in-house. Equipment you’ll need Camcorders The prices of high-quality hi-definition video cameras have plummeted in the past two years. • The Flip cam has revolutionized the way people capture and share video. • There are an astonishing range of professional-quality video camera in the $450 to $800 range today. Microphone Tripod Elements of video stories

American Civil Liberties Union (ACLU) At the elite colleges - dim white kids AUTUMN AND a new academic year are upon us, which means that selective colleges are engaged in the annual ritual of singing the praises of their new freshman classes. Surf the websites of such institutions and you will find press releases boasting that they have increased their black and Hispanic enrollments, admitted bumper crops of National Merit scholars or became the destination of choice for hordes of high school valedictorians. Many are bragging about the large share of applicants they rejected, as a way of conveying to the world just how popular and selective they are. What they almost never say is that many of the applicants who were rejected were far more qualified than those accepted. Researchers with access to closely guarded college admissions data have found that, on the whole, about 15 percent of freshmen enrolled at America's highly selective colleges are white teens who failed to meet their institutions' minimum admissions standards.

Security tip: When being interviewed on TV, make sure passwords aren’t written behind you Over 170,000 people are part of the Sophos community on Facebook. Why not join us on Facebook to find out about the latest security threats. Hi fellow Twitter user! Already using Google+? What's wrong with this picture? It's just a photo of a man being interviewed on ESPN about baseball. Let's take a closer look. Whoops. Okay, so I'm guessing that the interview was done in a press room, and that the passwords are on the wall for the convenience of journalists who wish to file copy and post updates online - but it still seems a little sloppy to have WiFi passwords so blatantly visible in the background during a TV interview! Follow @gcluley <a href=" Our Poll</a> Graham Cluley is senior technology consultant at Sophos.