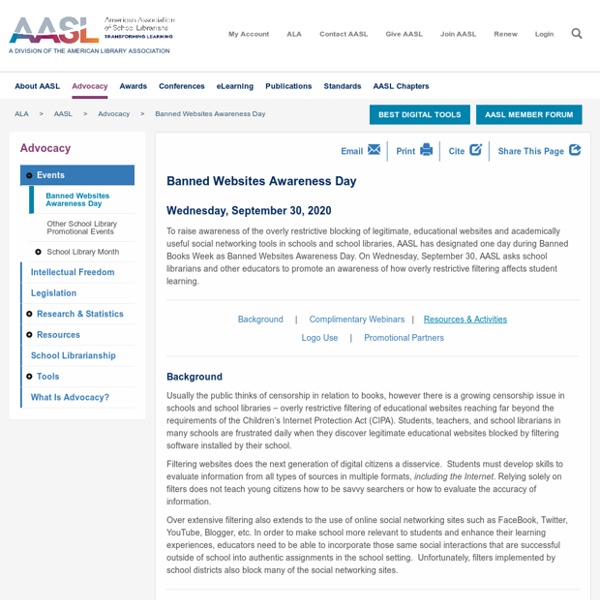 To raise awareness of the overly restrictive blocking of legitimate, educational websites and academically useful social networking tools in schools and school libraries, AASL has designated one day during Banned Books Week as Banned Websites Awareness Day. On Wednesday, September 30, AASL asks school librarians and other educators to promote an awareness of how overly restrictive filtering affects student learning. Background | Complimentary Webinars | Resources & Activities Logo Use | Promotional Partners Background Usually the public thinks of censorship in relation to books, however there is a growing censorship issue in schools and school libraries – overly restrictive filtering of educational websites reaching far beyond the requirements of the Children’s Internet Protection Act (CIPA). Filtering websites does the next generation of digital citizens a disservice. Resources Intellectual Freedom related posts on Knowledge Quest AASL White Paper on Educational Technology in Schools Related:  Intellectual Freedom and Censorship For Students

Cookies Required Emerging Tech is a professional learning community (PLC) where school librarians can explore all the ways to integrate technology and 21st century learning into school library programs. The community hosts free monthly webinars and live chats presented by Michelle Luhtala, Head Librarian at New Canaan High School (CT). Online discussions provide an easy way to continue the conversation and share ideas and experiences with peers across the country, and around the world. Upcoming Webinars Wednesday, April 23, 2014 - 5PM Eastern Time Wednesday, May 21, 2014 - 5PM Eastern Time Wednesday, June 18, 2014 - 5PM Eastern Time Pre-registration is not required for Emerging Tech community members. Join the webinar at the scheduled time with this link: You'll be automatically emailed a CE certificate for attending a live session. Be sure to join the Emerging Tech community: Hear what educators have to say about online PD! About Follett’s K-12 Business

Library Bill of Rights | Advocacy, Legislation & Issues The American Library Association affirms that all libraries are forums for information and ideas, and that the following basic policies should guide their services. I. Books and other library resources should be provided for the interest, information, and enlightenment of all people of the community the library serves. Materials should not be excluded because of the origin, background, or views of those contributing to their creation. II. III. IV. V. VI. VII. Adopted June 19, 1939, by the ALA Council; amended October 14, 1944; June 18, 1948; February 2, 1961; June 27, 1967; January 23, 1980; January 29, 2019.

About Banned & Challenged Books - ALA Does ALA ban books? No. The ALA's Office for Intellectual Freedom (OIF) receives reports from libraries, schools, and the media on attempts to ban books in communities across the country. We compile lists of challenged books in order to inform the public about censorship efforts that affect libraries and schools. The ALA condemns censorship and works to ensure free access to information. For more information on ALA's efforts to raise awareness of censorship and promote the freedom to read, please explore Banned Books Week. What's the difference between a challenge and a banning? A challenge is an attempt to remove or restrict materials, based upon the objections of a person or group. Why are books challenged? Books usually are challenged with the best intentions—to protect others, frequently children, from difficult ideas and information. Censorship can be subtle, almost imperceptible, as well as blatant and overt, but, nonetheless, harmful. — On Liberty, John Stuart Mill

Don’t Be a B.L.O.B. – Support Responsible Use of Technology with BYOT! What is a BLOB? Think of the 1958 horror/science-fiction film, The Blob, that portrayed two young teenagers struggling to battle a giant mass of an alien that attempted to swallow up their small town in Pennsylvania. The movie poster described the Blob as “Indescribable…Indestructible! Nothing Can Stop It!” Without hesitation, this amoeba-like creature indiscriminately consumed everything in its path until the teenage heroes managed to utilize their available resources to render it useless. In today’s schools, a BLOB acquires a completely new meaning – a Banner – Locker – Or – Blocker. A BLOB may also be guilty of indiscriminately interpreting the requirements of the Children’s Internet Protection Act (CIPA) to over filter websites and social media throughout the school day, even to the detriment of learning opportunities of students. What Is Responsible Use? What Can I Do to Avoid Becoming a BLOB? Resources Barseghian, T. (2011, September 20). Wikipedia. (28/0). Like this: Like Loading...

The School Library Media Specialist: Information Access & Delivery "Intellectual freedom is the right of every individual to both seek and receive information from all points of view without restriction. It provides for free access to all expressions of ideas through which any and all sides of a question, cause or movement may be explored." Excerpted from the Intellectual Freedom and Censorship Q & A (2010). American Library Association. I don't think we should have books containing "bad words" in our library. Google, Yahoo, and all those other search engines just bring porn into the school. I don't think children should be allowed to read about witches, wizards, or magic. These could be comments made at school board meetings, in parent organizations, or even in your library. Intellectual freedom is the right of any person to hold any belief on any subject and to express such beliefs or ideas in the way he or she believes appropriate. The value you place on intellectual freedom will influence the materials your make available to your students. In-house.

ALA Releases List of Top 100 Most Banned and Challenged Books - Publisher's Weekly As part of the American Library Association's annual Banned Books Week (which this year runs from September 27 to October 3), the organization has released a list of the 100 most banned and challenged books of the last decade, 2010-2019. Topping the list: Sherman Alexie's The Absolutely True Diary of a Part-Time Indian; Captain Underpants by Dav Pilkey; Thirteen Reasons Why by Jay Asher, Looking for Alaska by John Green, and the most challenged book of 2019, George, by Alex Gino. First launched in 1982, Banned Books Week is the ALA's annual event celebrating the freedom to read and highlighting the value of free and open access to information. ALA publishes the lists to draw attention to literary censorship. But ALA officials stress that the annual report provides only a snapshot of book challenges, with ALA acknowledging that most challenges go unreported. For resources and more on the events set for the 2020 Banned Books Week, visit the ALA's website.

BWAD: How to be a Ninja Warrior Filter Fighter Life is not filtered. But the Internet is - at my school. What are we teaching the kids? How can we teach knowledge, discernment, and ethics without giving them a chance to make good choices and yes, sometimes mistakes? Celebrate: Banned Websites Awareness Day "AASL has designated October 3 as the second annual Banned Websites Awareness Day. Complimentary BWAD (Banned Websites Awareness Day) Webinar Join us! Here are the slides from my preso on Slideshare! Resources: AASL BWAD main site with background and resources Michelle Luhtala's Blog postings: danah boyd article on Huffington Post:Kids And Social Media: danah boyd Asks Parents To Name Their 'Biggest Fear'

Censorship | I Love Libraries Libraries are advocates for the freedom of the press and the freedom to read, inalienable rights guaranteed in the United States Constitution. Despite that, there are an astonishing number of threats to that freedom occurring in libraries today. Censorship is the suppression of ideas and information that certain persons—individuals, groups or government officials—find objectionable or dangerous. It is no more complicated than someone saying, “Don’t let anyone read this book, or buy that magazine, or view that film, because I object to it! ” Censors try to use the power of the state to impose their view of what is truthful and appropriate, or offensive and objectionable, on everyone else. Censors pressure public institutions, like libraries, to suppress and remove from public access information they judge inappropriate or dangerous, so that no one else has the chance to read or view the material and make up their own minds about it. The Freedom to Read Foundation The LeRoy C.

Banned Books Week It's Banned Websites Awareness Day! ... you can catch an encore presentation at 7PM PDT this evening (yes, 10PM EDT), October 3, 2012 at the Library 2.012 virtual conference AASL, the organization that launched Banned Websites Awareness Day in the first place, offers a number of resources for participants, including the BWAD page, the AASL Essential Links for BWAD, and the AASL blog. You can contribute to our collaborative slide presentation! Here is the link to add a slide, and the presentation follows: And hey, you can always include #BWAD in your Tweets! Intellectual Freedom 101: Strategies for School Libraries | AASL 2013 Among the dozens of concurrent learning sessions at the American Association of School Librarians (AASL) National Conference last month, a popular theme was that of intellectual freedom in the classroom and school library. “What Do I Do If? Intellectual Freedom Dilemmas in School Libraries,” [PDF] one of several panels to examine the subject, stood out for its scope and its round-robin style approach to problem-solving and swapping of best practices. The presenters came from diverse backgrounds, representing numerous grade levels from K through 12, to share their personal experiences in facing intellectual freedom situations in their schools, from books to websites to collection development. Freedom to read Dee Venuto, high school librarian in Lumberton, NJ, shared the repeated challenges she’s faced in teaching the award-winning Dreaming in Cuban (Random House, 1992) by Cristina García. “Every challenge poses such difficult questions,” Venuto adds.