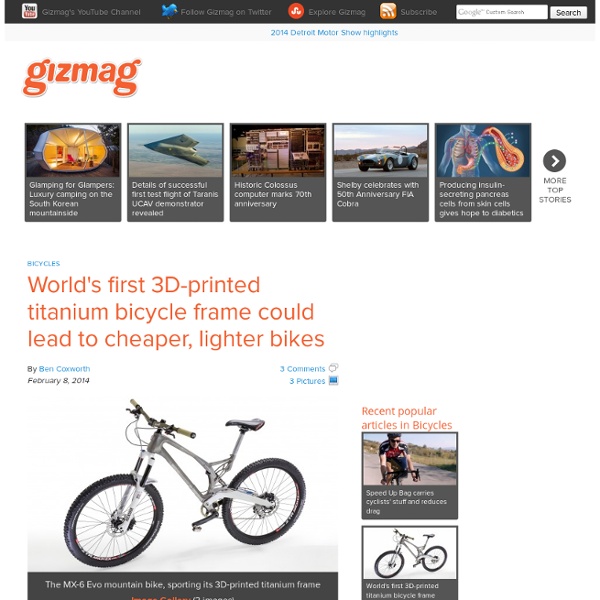 The MX-6 Evo mountain bike, sporting its 3D-printed titanium frame Image Gallery (3 images) When it comes to a high strength-to-weight ratio, titanium is just about the best material out there for manufacturing bicycle frames. Renishaw, an additive manufacturing firm, joined forces with Empire Cycles to build the one-off titanium MX-6 Evo mountain bike. The frame was built using an AM250 laser melting machine manufactured by Renishaw. Because titanium has a higher density than aluminum, less of it had to be used if Empire wanted a finished bike that was lighter than the stock model. As a result, at a total of 1,400 grams (3 lb), the finished Evo frame weighs 33 percent less than its aluminum counterpart. So, how could this project lead to cheaper titanium frames? It should also be relatively simple to tweak frame designs as needed, or to add custom features to individual frames. Source: Renishaw via Stuff About the Author Post a CommentRelated Articles Related:  Exotic • New Print Technica • Tires, Wheels, Brakes

Your next bike could be made from folded sheet metal - Images Go into any bicycle store, and pretty much all of the bikes in there will have frames made from metal tubes or carbon fiber. A few manufacturers have gotten a bit more adventurous, offering frames made of bamboo or wood, while some have even experimented with things like aramid panels and nylon. A trio of San Francisco-based entrepreneurs, however, have created a prototype bicycle using yet another frame material – hand-folded sheet metal. They claim that their product is lighter, stronger and cheaper to produce than an aluminum-tube frame, and they’re hoping to be able to sell you one. View all Rob, Mark and Andy are three mechanical engineers, who make up the company known as Ronin Metal Masters. After some experiments using heavy stock paper, the current prototype was built out of 0.024 inch (0.6 mm)-thick 6061-T6 aluminum. While the frame certainly has a unique “iron bridge” look to it, the choice of material goes beyond aesthetics. Source: Ronin Bicycle Works

EBIKE 72v - X5404 Genesis Farfle build Pt1 Programmable Matter: Claytronics or Gershenfeld We still tell our children “you can be anything when you grow up.” It’s time to start telling them “you’re going to be able to make anything…right now.” Similar work at MIT and Carnegie Mellon is pointing towards the next revolution in computers and manufacturing: programmable matter. In the future you won’t use computers to design a car, the car will form from billions of tiny computers that arrange themselves into anything you want. The physical and computational world will merge. Claytronics is developing tiny computers that can work together to form shapes. How can a material be intelligent? Carnegie Mellon isn’t the only university pursuing intelligent materials. It All Looks Good on Paper It would be amazing if these technologies were available today, but they are still a long way off. In hardware, Claytronics has already made centimeter sized cylindrical catoms that have basic features. To test Catom forces without gravity, helium filled prototypes are used.

BriTek's Brilliant Airless Bicycle Tire Reinvents the Wheel Flat bicycle tires could be a thing of the past thanks to BriTek‘s amazing new Energy Return Wheel. Whereas most bike tires regulate tire firmness with air pressure, with the Energy Return Wheel one simply adjusts the tension of the rubber that is stretched around a 29-inch carbon fiber wheel. Initially tested on cars, the airless tire is comprised of two layers of rubber – one at the center, stretched and held by adjustable rods, and the other on the outside. The space between, usually filled with air, holds a series of elastic cushions. The internal scaffolding of rods and cushions allow the tire go give and, according to Britek, react better to compression. The Energy Return Wheel is still being tested (the company is considering adding thin sidewalls to the fiber rims, to keep mud and trail debris from piling up within them). + Energy Return Wheel Via NBC News

Project hindsight. A Defense Department study of the... [Science. 1967 Drymer In pictures: Hidden gems from Interbike 2013 - Images The busy trade show floor at Interbike 2013 Image Gallery (41 images) If you've visited Gizmag at all within the past several days, then you're likely aware that we attended the Interbike trade show in Las Vegas last week. View all North America's largest bike show, Interbike 2013 featured over 750 companies representing at least 1,200 brands. To see what we found, just pay a visit to the photo gallery (and don't forget to check out the gadgets featured in the earlier full articles, too). About the Author An experienced freelance writer, videographer and television producer, Ben's interest in all forms of innovation is particularly fanatical when it comes to human-powered transportation, film-making gear, environmentally-friendly technologies and anything that's designed to go underwater. Post a CommentRelated Articles Just enter your friends and your email address into the form below For multiple addresses, separate each with a comma

Digital Designs for Physical Objects Days Remaining: 0 Could you live on Mars? Certainly not without great design and engineering. That's why we, in cooperation with NASA's Jet Propulsion Laboratory, are excited to present the Makerbot Mars Base Challenge. Taking Mars’ extreme cold, high radiation levels, lack of oxygen, and frequent dust storms into consideration, design a utilitarian Mars base that can withstand the elements and maybe even make you feel at home, despite being 140 million miles away from Earth, on average. Learn more about Mars and what kind of home could actually sustain life there on {*style:<a href=' Imagine Mars website{*style:</a>*}.Upload your design to Thingiverse with the tag #MakerBotMars between May 30th and June 12th.

Cyclists Rejoice: PumpTire Is the World's First Self-Inflating Bicycle Tire Where has this invention been all our lives? San Francisco-based startup PumpTire has just created the world’s first self-inflating bicycle tire, which uses the spinning motion and weight of your bike to keep its tires perfectly inflated at all times. So how does it work? The PumpTire product consists of a tube, a bicycle tire, and a valve. + PumpTire Via PSFK Yamaha celebrates 20 years of pedal-electric bicycles with YPJ-01 concept - Images The YPJ-01 on display at the Tokyo Motor Show Image Gallery (13 images) While most of us know Yamaha for its motorcycles or snowmobiles, the company has also been working on pedal-electric bicycles for the past 20 years, as part of its PAS project. View all "Combining the smallest and lightest class of drive unit and battery with a beautiful, sporty frame, this model offers the exciting ride characteristic of a hybrid design," says Yamaha. The bike also features smartphone integration, allowing the rider to use their handlebar-mounted mobile device to view "the bicycle's information." There's no word on when or if we'll ever be able to buy a YPJ-01 of our own, or if it's purely a design exercise. Source: Yamaha About the Author Post a CommentRelated Articles Just enter your friends and your email address into the form below For multiple addresses, separate each with a comma Privacy is safe with us because we have a strict privacy policy.

Autopoietic Computing | DarkAI Blog Proposed by: darklight@darkai.org on 12/30/2013 Reality augmented autopoietic social structures A self replicating machine is a machine which can make a copy of itself. Just as biological entities have DNA which operates on the same principle of self replication, the same fundamental process which takes place in biological organisms can take place in artificial lifeforms. Self replication of a reality augmented autopoietic social machine can be facilitated by many different methods. In order for an idea to replicate itself it must encourage itself to be copied and if we consider the essence of the decentralized autonomous corporation to be a general idea then the entire family of DACs all belong to the same family of ideas, the same family tree, and trace back to the same source. The protochain could just as easily have been called a seedchain. “Biological seeds grow into larger organisms using local matter and energy, and eventually produce copies of the original seed. References