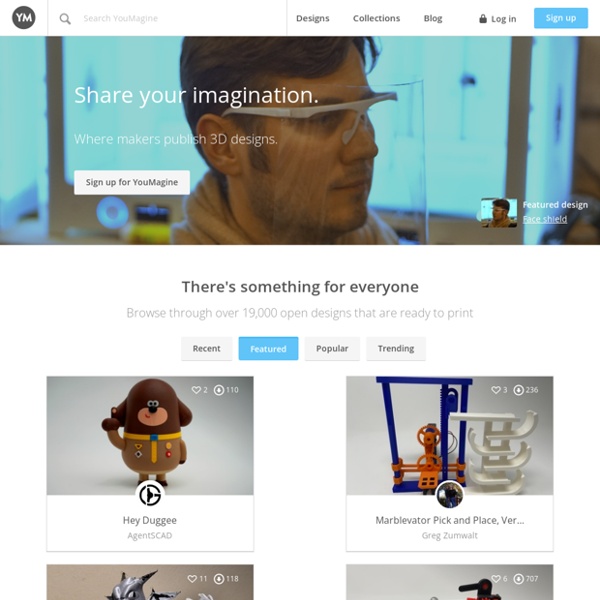 Open Source Wedding Rings [update 1][update 2] I lost my wife’s wedding band a few years ago. She handed it to me while I was driving and asked me to take it to a jeweler to get it hammered back “in round”. Of course, I lost it immediately. My original wedding band I still have, but it’s always been a little unsatisfying. My ring finger is thinner than hers, and the pattern never quite matched where the original jeweler sized it down. Blender Tutorial: Blender 3D printing tutorial This tutorial was made for Blender users with an interest in 3D printing. It covers the essential information for taking your 3D model and turning it into a 3D object using the free CAD software. Through this tutorial, you will learn some of the best practices for modeling, correcting and exporting a 3D file for 3D printing with Blender 2.7. Specifically this tutorial covers the following points:

XRobots.co.uk - 3D Printed R2-D2 R6 Droid Frame There are many Astromech droid builders worldwide, along with readily available plans, CAD drawings, and blueprints which you can use to build your own droid. Check out the US and UK builders clubs. Typically the projects built by members are made from wood, aluminium, steel or plastic parts. Some of the metal droid weigh up to 100Kg, while the Styrene droids are much lighter. Museum Pieces collection Collection Cover Remove Mexican Girl Dying by met Jan 14, 2014 Head and Shoulders of a Sphinx of Hatshepsut by met Jun 4, 2014 Louise Brongniart by met Mar 23, 2014 Nydia, the Blind Flower Girl of Pompeii by met Jun 2, 2012 Rebecca at the Well by tbuser Aug 6, 2012 Setting up Raspberry Pi for 3D Printing with RepRap Having a 3D printer is cool, but requires a PC to be attached to it for control and monitoring (things like jogging, setting temperatures and even sending the gcode). Wouldn’t it be nice if the PC was a small circuit board attached to the printer making it a compact all-in-one solution? Here is how to use a Raspberry Pi $25 PC to do exactly that!

Mazzo di Fiori & the Next Generation 3D Printer by Joshua Harker I am an artist. I have become known for my pioneering work in the 3D printed medium & have a professional history in product invention/design & development. My art is about pushing the limits of form... an exploration into what can be made & how to accomplish it. My venture into this project is a direct extension of that. For the last 18 months I've been developing a new 3D printing technology to usher in the next generation of the 3D printing revolution in terms of quality, capability, cost, access, & ease of use. Blender 3D Modeling Software You can do 3D Open Source modelling and animation with Blender software. Blender 3D Modeling Software screenshot About Blender software This free CAD software was published by NaN (Not a Number). Originally, Tom Roosendaal, the cofounder of NeoGeo, the largest 3D animation studio in the Netherlands, was behind creating this CAD software.

HNTE - LED Cube This is exactly what it sounds like, an awesome flashing cube of LED's. After seeing a 512 LED cube on hackaday I decided that I needed one for myself and went right to ebay to find some cheap LED's. Although 512 LED's seems like a daunting number it only took one weekend to make the control circuit and construct the cube, the code and animations though took a few weeks, maybe coding isn't my thing. I will go through some of the steps and theory here and you can see the results in the video at the end.