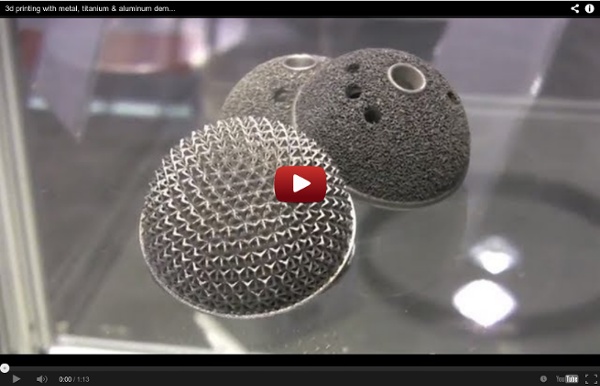 Shapeways: 3D Printing Glass Project hindsight. A Defense Department study of the... [Science. 1967 3D-Printed-Labyrinth-Totem.m4v OpenFab Programmable Matter: Claytronics or Gershenfeld We still tell our children “you can be anything when you grow up.” It’s time to start telling them “you’re going to be able to make anything…right now.” Similar work at MIT and Carnegie Mellon is pointing towards the next revolution in computers and manufacturing: programmable matter. In the future you won’t use computers to design a car, the car will form from billions of tiny computers that arrange themselves into anything you want. Claytronics is developing tiny computers that can work together to form shapes. How can a material be intelligent? Carnegie Mellon isn’t the only university pursuing intelligent materials. It All Looks Good on Paper It would be amazing if these technologies were available today, but they are still a long way off. In hardware, Claytronics has already made centimeter sized cylindrical catoms that have basic features. To test Catom forces without gravity, helium filled prototypes are used. Software research is just as rigorous.

Fractal Graph 4 markus kayser: solar sinter 3D printer jun 28, 2011 markus kayser: solar sinter 3D printer ‘solar sinter’, a solar-powered 3D printer by markus kayser, utilizes the abundant desert resources of sun and sand to manufacture products london-based markus kayser, a masters candidate in design products at the royal college of art, converts the raw resources of sunlight and sand into glass products with his fully automated, solar-powered ‘solar sinter‘ 3D printer. the device works from the same technique of sintering that is common to most 3D printer processes, heating a powder (here silicia sand) to its melting point and letting it cool and solidify (here into glass). ‘solar sinter’ utilizes the sun’s rays in place of a laser to selectively heat parts of the sand. kayser created and tested a manually operated ‘solar sinter’ in february 2011, before producing the fully automated, computer-driven version depicted here during two weeks of testing in the sahara desert. the machine utilizes replicatorG opensource software. detail view

World's first 3D-printed titanium bicycle frame could lead to cheaper, lighter bikes The MX-6 Evo mountain bike, sporting its 3D-printed titanium frame Image Gallery (3 images) When it comes to a high strength-to-weight ratio, titanium is just about the best material out there for manufacturing bicycle frames. Unfortunately, those frames are also quite expensive. They could be about to come down in price, however – two British companies recently teamed up to create the world's first 3D-printed titanium bike frame. Renishaw, an additive manufacturing firm, joined forces with Empire Cycles to build the one-off titanium MX-6 Evo mountain bike. The frame was built using an AM250 laser melting machine manufactured by Renishaw. Because titanium has a higher density than aluminum, less of it had to be used if Empire wanted a finished bike that was lighter than the stock model. As a result, at a total of 1,400 grams (3 lb), the finished Evo frame weighs 33 percent less than its aluminum counterpart. So, how could this project lead to cheaper titanium frames? About the Author

China’s Huge 3D Printers, Soon Able to Print Automobile Sized Metal Objects One of the biggest possible economic impacts of 3D printing to the U.S. economy is the fact that it may eventually allow corporations to bring jobs back onshore from China. The United States outsources a large number of jobs over to Asia as a way to cut labor costs. 3D printing and robotics promises to change some of this, as companies can utilize industrial scale 3D printers and automation to manufacture parts for their products, cheaper than even the labor force in China can produce them. That’s if, of course China lags behind in their adoption of these technologies. It appears, however that China is investing heavily in 3D printing, just like those in the U.S. and Europe. Their corporate and government leaders clearly can identify an emerging technology and its possible economic impact on the future of China. This isn’t where it ends though. 1.8 meters is nothing compared to what China has done since, and plans to do within the next month or so.

Octahedron Fractal Graph First Person: A Frank Discussion on 3D Printing's Evolution and Future AD:Who are the major players in the industry? David Cox: Today, there are two major players in the 3D printing market – Stratasys and 3D Systems, which have contributed to a lot of the consolidation that has taken place over the past few years. Last year we saw the completion of the merger of Stratasys and Objet to create a $3 billion company. 3D Systems has been on a buying spree with its purchase of some competing technology along with materials developers and service bureaus. Of course, the down side of this consolidation is that the price of the equipment and the materials is going up. AD: While it’s taken 25 years, 3D printing or “additive manufacturing” is seeing some good success. 3D printing means you can create prototype parts without having to build a mold first — which is expensive. AD: There is a lot of talk about making end-use parts using 3D printing. David Cox: Ninety percent of 3D printing is still done for prototyping and product development — R&D activities.