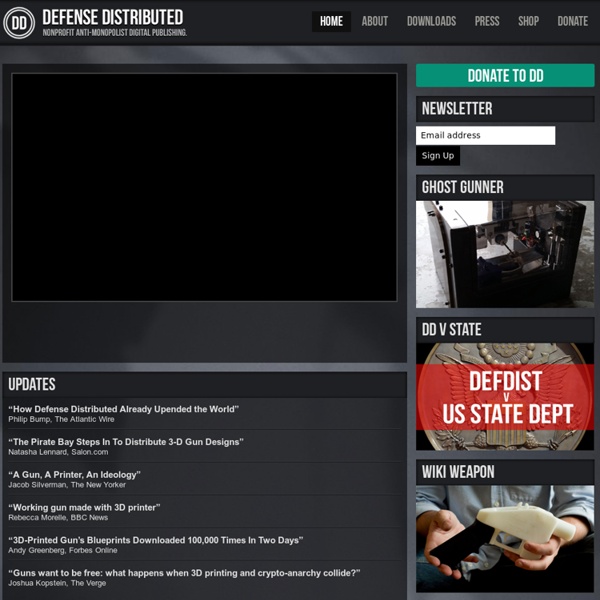 Lists of weapons Lists of weapons From Wikipedia, the free encyclopedia Jump to: navigation, search There is a bewildering array of weapons, far more than would be useful in list form. Therefore, a particular weapon is best found within one or more of the following sub-lists: Guild Wars 2 Guild Wars 2 logo Guild Wars 2 is the sequel to the Guild Wars series by ArenaNet. The game features a new game engine as well as changes to character development and the Player versus Player system. All released information regarding it has been compiled below. If you have a specific question in mind, please check the FAQ first. Cody Wilson Cody Rutledge Wilson (born January 31, 1988) is an American crypto-anarchist[1][2] and free-market anarchist, and activist,[3] best known as a founder/director of Defense Distributed, a non-profit organization that develops and publishes open source gun designs, so-called "Wiki Weapons", suitable for 3D printing.[4][5] Early life and career[edit] Wilson is a former student[11] of the University of Texas School of Law.[10][12] Defense Distributed[edit]

Home Depot Garden Stake Bamboo Arrow Build-A-Long (Pic Heavy) in Arrow Making Tutorials and Helpful Information Forum Bamboo Arrow Build-A-Long Now I'm going to show you how to attach Glue-On Broadheads and Glue-On Nocks. First drill the front of the shaft (point end, fat end) with a 1/4" drill bit a little over 3" deep. The shaft will want to split so go slow. Next cut a 3" peice of 1/4" hardwood dowel.

RepRapWiki TEDxEWB Talk: Adrian Bowyer at Imperial College, London, introduces RepRap RepRap is humanity's first general-purpose self-replicating manufacturing machine. RepRap takes the form of a free desktop 3D printer capable of printing plastic objects. Since many parts of RepRap are made from plastic and RepRap prints those parts, RepRap self-replicates by making a kit of itself - a kit that anyone can assemble given time and materials. It also means that - if you've got a RepRap - you can print lots of useful stuff, and you can print another RepRap for a friend... RepRap is about making self-replicating machines, and making them freely available for the benefit of everyone.

Man held on suspicion of owning guns made with 3-D printer YOKOHAMA – A 27-year-old man who allegedly made handguns with a 3-D printer was arrested Thursday on suspicion of illegal weapons possession, the first time Japan’s firearms control law has been applied to the possession of guns made by this method. The suspect, Yoshitomo Imura, an employee of Shonan Institute of Technology in Fujisawa, Kanagawa Prefecture, had the plastic guns at his home in Kawasaki in mid-April, the police said. No bullets have been found. The police launched an investigation earlier this year after Imura posted video footage online of the guns, which he claimed to have produced himself, along with blueprints for them, according to investigative sources.

How to Make a Lethal Traveling Arc of Electricity with a MOT-Powered Jacob's Ladder With the microwave oven transformer (M.O.T.) salvaged in a previous project, a simple electrical circuit can be rigged to get high voltage arcs to fly outward and upward along a "V" shaped spark gap. You can look, but don't touch! These arcs of plasma are lethal enough to kill on contact! Item Crafting - Neo Scavenger Wiki Crafting recipes are lists of items required in combination to create one or more new items. Since v0.971b the items are listed by their properties. A single item can have several properties and several items can have the same property. For example, the medium tree branch has the properties "medium", "fire fuel", "flammable", "rigid", "shaft", "springy" and "tannin source", while twigs & bark have the properties "small", "kindling", "rigid parts" and "tannin source" as well.

This Is The World's First Entirely 3D-Printed Gun (Photos) Eight months ago, Cody Wilson set out to create the world’s first entirely 3D-printable handgun. Now he has. Early next week, Wilson, a 25-year-old University of Texas law student and founder of the non-profit group Defense Distributed, plans to release the 3D-printable CAD files for a gun he calls “the Liberator,” pictured in its initial form above. He’s agreed to let me document the process of the gun’s creation, so long as I don’t publish details of its mechanics or its testing until it’s been proven to work reliably and the file has been uploaded to Defense Distributed’s online collection of printable gun blueprints at Defcad.org. Update: Here’s my full account of Defense Distributed’s first test-firings of the Liberator, including firing it by hand. All sixteen pieces of the Liberator prototype were printed in ABS plastic with a Dimension SST printer from 3D printing company Stratasys, with the exception of a single nail that’s used as a firing pin.

How To Make Use Of Improvised Weapons - Online Survival Blog & Survival News (This article was originally published on survivopedia.com and written by Chris Black. To Read this article and more like it please click here) We all love our guns and we can’t imagine life without them. Five silent weapons (or tools) that will knock your socks off Silent weapons, no, not the kind of silent weapon used by CIA spooks or KGB assassins to dispose of targets during the cold war or the type screwed onto the barrel of a long-range sniper rifle, with cross hairs zeroed on the heart of a charismatic evil leader or the ex that continues to suck at the wallet year after year forcing you to live in deprivation while they and your replacement live in the lap of luxury at your expense. No, the silent weapons that I’m talking about are less sinister . The value of silence under certain survival conditions could literally mean the difference between life and death for the survivor. Taking game silently could be essential in keeping your location secret and avoiding potential threats, or frightening away other animals in the area. Never fall into the trap of being totally dependent upon one food source, therefore learning to hunt is important.