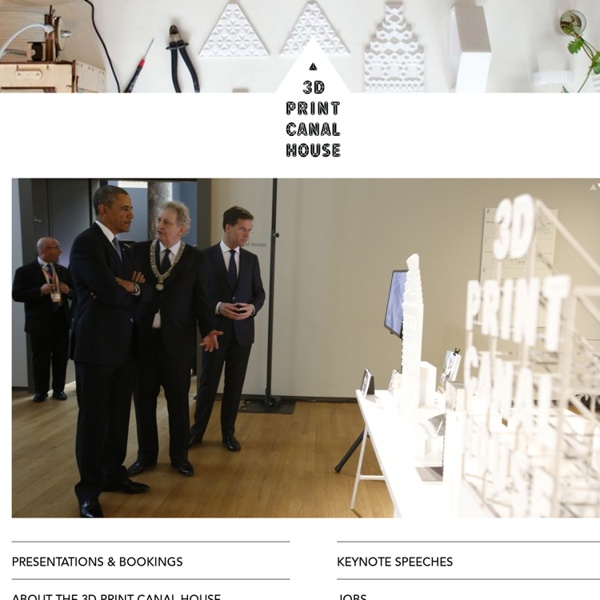 1. Why 3D Printing? 3D printing is a fascinating new production technique. It allows you to directly translate a digital file into a physical product. 3D printing can have huge implications for the way we fabricate things - for example the elimination of waste, transport costs and standardisation of elements - DUS architects is investigating what the implications of 3D printing are for the building industry. What better way to do this than by 3D printing an entire house? 2.

Printing Material Distributions Most digital design involves surface modeling. Even so called “solid” modeling software is based on representations where a “solid” is that which is enclosed by a set of boundaries (known as boundary representations or ‘Brep’ for short). While digital representations of solid objects are often treated as homogeneous and discrete entities, the reality is somewhat different. In the real world, material distributions are continuous and varied. Yet, with regard to architectural components, the variability of material within a volume is usually concealed (ie. porosity of bricks, various types of reinforcements for concrete structures, etc.) and is rarely taken into account during the early design process. With the advent of 3d printing techniques, a new possibility emerges - allowing us the ability to reconsider the aesthetic and mechanical properties of visible reinforcement.

Step Into The Future: Meet Amelia IPsoft invites you to join us at Cipriani’s 25 Broadway Landmark Building in New York on Thursday, December 4th, when we will preview the transformation technology of our time: cognitive business automation. Mark this date to begin your journey into the future. Thought leaders Andrew McAfee of MIT (author, The Second Machine Age) and Frances Karamouzis (Gartner Distinguished Analyst), will discuss the coming cognitive revolution. IPsoft will then introduce you to Amelia, the world’s first cognitive agent capable of human understanding. Pioneering clients and partners will share their experiences of deploying Amelia today.

Work begins on the world's first 3D-printed house Treacle-black plastic oozes from a nozzle at the bottom of a small tower in Amsterdam, depositing layer upon layer of glistening black worms in an orderly grid. With a knot of pipes and wires rising up to a big hopper, it looks like a high-tech liquorice production line. But this could be the future of house-building, if Dus Architects have their way.

Mediated Matter Neri Oxman and Steven Keating Functionally graded materials–materials with spatially varying composition or microstructure–are omnipresent in nature. From palm trees with radial density gradients, to the spongy trabeculae structure of bone, to the hardness gradient found in many types of beaks, graded materials offer material and structural efficiency. But in man-made structures such as concrete pillars, materials are typically volumetrically homogenous. While using homogenous materials allows for ease of production, improvements in strength, weight, and material usage can be obtained by designing with functionally graded materials. To achieve graded material objects, we are working to construct a 3D printer capable of dynamic mixing of composition material.

5 waves of technology disruption that are just getting started Changes in technology are happening at a scale which was unimaginable before and will cause disruption in industry after industry. This has really begun to worry me, because we are not ready for this change and most of our leading companies won’t exist 15–20 years from now. Here are five sectors to keep an eye on: 1. How 3D Printing Will Change Our World (Part II) Today, 3D Printing technology lives in the realm of small plastic tchotchkes. But economists, theorists, and consumers alike predict that 3D printers will democratize the act of creation and, in so doing, revolutionize our world. Which poses an interesting quandary: what will happen when we can print houses?

Our future of unlimited wealth Technology advances are making amazing things possible: we finally have a chance to solve the problems that have long plagued humanity such as hunger, disease, energy, and education. The same technologies that make this abundance possible are however setting the stage for the elimination of the majority of human jobs. Within two decades, we will have almost unlimited energy, food, and clean water; advances in medicine will allow us to live longer and healthier lives; robots will drive our cars, manufacture our goods, and do our chores.

World's first 3D-printed apartment building constructed in China Interim Reddit CEO Ellen Pao has issued a no-nonsense apology to users of the popular website: "We screwed up." Pao on Monday took to Reddit to address an issue that flared up over the weekend after the company fired a popular administrator, and used the opportunity to say sorry for problems that date back years. Meanwhile, an online petition launched three weeks ago calling for her resignation now lists more than 190,000 signatures, just shy of the 200,000 milestone. That number represents about 1 percent of the nearly 164 million visitors Reddit tallied in June, 3 million of whom logged into the service.

Printing 3D Buildings: Five tenets of a new kind of architecture / Neri Oxman As a designer, architect, artist and founder of the Mediated Matter group at MIT’s Media Lab, Neri Oxman has dedicated her career to exploring how digital design and fabrication technologies can mediate between matter and environment to radically transform the way we design and construct our built world. In this article, which was first published by CNN, Oxman discusses the future of 3D printing buildings with five tenets of a new kind of architecture. In the future we will print 3D bone tissue, grow living breathing chairs and construct buildings by hatching swarms of tiny robots.

FBI warns driverless cars could be used as 'lethal weapons' Google’s driverless car may remain a prototype, but the FBI believes the “game changing” vehicle could revolutionise high-speed car chases within a matter of years. The report also warned that autonomous cars may be used as "lethal weapons". In an unclassified but restricted report obtained by the Guardian under a public records request, the FBI predicts that autonomous cars “will have a high impact on transforming what both law enforcement and its adversaries can operationally do with a car.” In a section called Multitasking, the report notes that “bad actors will be able to conduct tasks that require use of both hands or taking one’s eyes off the road which would be impossible today.” One nightmare scenario could be suspects shooting at pursuers from getaway cars that are driving themselves.

3D Printing Construction - English Questions: 1. To print a house, what needed?l A basic template or CAD Drawings; clients can choose a basic template, and customize it whatever they want. Similar to the 3D-printedconstruction projects, prefabricated buildings have also proven themselves to be fast, cost-effective options