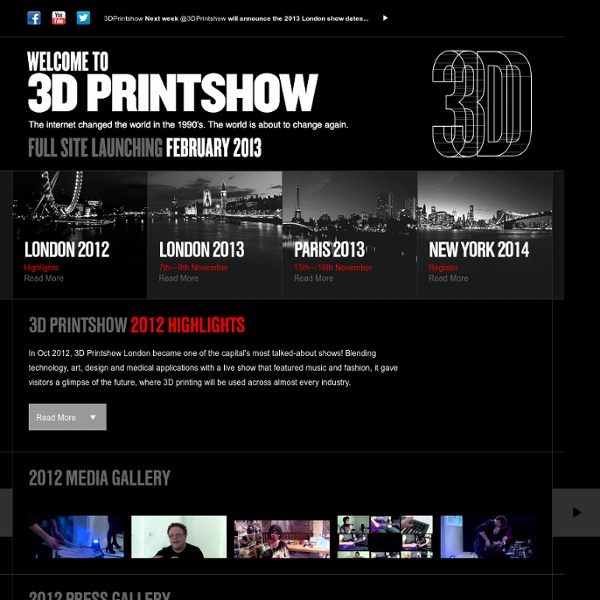 February 25 2014 3D Printshow NYC: Seminars In addition to the packed show floor and feature spaces at 3D Printshow New York, we were pleased to present an incredible workshop and seminars line-up. Two rooms, Cone and Sphere, hosted a range of fascinating presentations ranging from business, IP, arts, and even medical applications for 3D printing, and the topics covered certainly seemed to satisfy those who visited the show. For those of you that couldn’t make it, […]

Bukobot 3D Printer - Affordable 3D with No Compromises! by Diego Porqueras Affordable Desktop 3D Object Printing for EveryoneGreat First Printer..or Second..or Third! Easy to BuildEasy to Expand or UpgradeHigh Quality ComponentsFaster than most printersDual Extruder OptionGreat DocumentationOpen Source Environmentally Friendly Options You can create almost anything you can dream up with a Bukobot 3D printer, right on your desk! The Buko framework is the next generation of Open Source 3D Printers. 3D printers using this new framework are called Bukobots. With many months in development, I have combined the best ideas from the open source community and some new ideas of my own into an extremely flexible open source 3D printer design.

3D Printer Kit » DIY 3D Printer 3D Printer Kit DIY Plans The following sources are open source 3D printer kit designs at time published. The sources provide a summary, mechanics, electronics, software files, how to, tools, and updates on how to build a 3D printer. These are “do it yourself” (DIY) 3D printer plans and building instructions. Most of the open sourced 3D printer kit sources are under GNU free documentation license. girls spirit island Just about everyone who likes scary movies has either seen or heard of “Child’s Play” staring that demonic doll Chucky. It was about a doll that was possessed and terrorized the woman who bought it. “Child’s Play Two” and “Bride of Chucky” also starred this evil doll.

Cartesio Cartesio V0.5 Release status: working Cartesio is a professional grade 3D printer. Statistical Studies of Peer Production » Manufacturing in motion: first survey on 3D printing community by Jarkko Moilanen & Tere Vadén Another industrial revolution? Yochai Benkler’s book is available online as PDF, HTML and many other formats Economists and theorists of innovation such as Jeremy Rifkin , Yochai Benkler, Michel Bauwens , and several others have concluded that the Third Industrial Revolution is at hand [3, 10, 11, 12, 14, 15]. How long before we're eating 3D-printed food? In this article from Print Shift, our one-off magazine about additive manufacturing, Dezeen's Ben Hobson asks how soon we could be tucking into 3D-printed steaks. The concept of 3D-printed food is hard to swallow, but technology that could revolutionise the way we cook is hotting up. In 2009, Philips Design presented a sci-fi vision of the future with a conceptual food printer that could produce a perfectly balanced meal at the touch of a few buttons. Part of a research project called Food Probe, which looked at how we might source and eat food in 15 to 20 years’ time, the imagined machine would allow our future selves to print out our ideal combinations of flavours and nutrients in an unlimited range of forms.

Phoenix 3D Printer by Ez3D Missed the Kickstarter? You can still get a Phoenix! Visit our web site at www.phoenix3dprinter.com. Some of our updates are important! Here is a list of the updates new backers should read: At the San Mateo MakerFaire, virtually everyone we spoke to asked us this question. Mataerial 3D printer by Petr Novikov, Saša Jokić, Joris Laarman Lab and IAAC Plastic extruded from this robotic 3D printer solidifies instantly, allowing it to draw freeform shapes in the air extending from any surface (+ movie). Unlike normal 3D printers that require a flat and horizontal base, Mataerial prints with plastic that sticks to horizontal, vertical, smooth or irregular surfaces, without the need for additional support structures. Petr Novikov and Saša Jokić from Barcelona's Institute for Advanced Architecture of Catalonia created the machine during their internship at Joris Laarman Lab, where students are given a platform to experiment with new digital fabrication methods.

Phoenix 3D Printer As a follow up to our very successful Kickstarter campaign, we're here on IndieGogo for round two of our Phoenix 3D Printer! "What makes your 3D printer so different than everyone else's?" At the San Mateo MakerFaire, virtually everyone we spoke to asked us this question. WikiWep DevBlog. DOJ began a PR push last week to find legislative traction for a set of proposed bills that would criminalize the individual production of rifle receivers and magazines with 3D printers. Sections 4 and 5 of the proposed House bill directly criminalize 3D printed receivers and magazines, and mandate an arbitrary amount of metal be part of their fabrication. Beyond suffering from fatal Due Process and GCA problems, the bill’s prohibitions are not extended to manufacturers because (hint) there isn’t actually a security issue at stake. The bad faith and fraud required to hide this from the current public discussion is of course par for the course. The media organs have dutifully repeated the official account.

The Most Incredible 3-D Printed Things We’ve Ever Seen ⚙ Co The levees have broken for 3-D printing, and the resulting deluge of printing-concepts-on-the-cheap is flowing faster than we can gather. The best of these rise to the surface for their innovating predictions of a faster/safer/healthier future. A Robotic Hand That Doesn’t Cost An Arm And A Leg The gMax 3D Printer - Print. Bigger. by Gordon LaPlante If we reach: Read About gMax Printer At: Imagine a world where you can come up with a design in your mind and have the physical object, large or small, in your hands with just a few clicks on a computer in the comfort of your own home or office. 3D printing is something that I was interested in long before I designed the gMax printer. Studying and working in architecture, I’ve been interested in building and design since childhood. Winter 2010 is when I bought a Prusa RepRap kit from the usual sources, and started assembling in my free time.