The Reading Brain in the Digital Age: The Science of Paper versus Screens 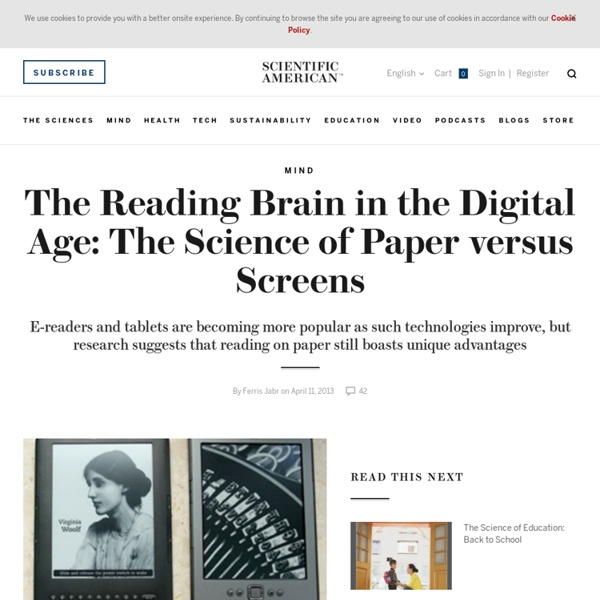 In a viral YouTube video from October 2011 a one-year-old girl sweeps her fingers across an iPad's touchscreen, shuffling groups of icons. In the following scenes she appears to pinch, swipe and prod the pages of paper magazines as though they too were screens. When nothing happens, she pushes against her leg, confirming that her finger works just fine—or so a title card would have us believe. The girl's father, Jean-Louis Constanza, presents "A Magazine Is an iPad That Does Not Work" as naturalistic observation—a Jane Goodall among the chimps moment—that reveals a generational transition. "Technology codes our minds," he writes in the video's description. "Magazines are now useless and impossible to understand, for digital natives"—that is, for people who have been interacting with digital technologies from a very early age. Perhaps his daughter really did expect the paper magazines to respond the same way an iPad would.

Know More Know more. Map your mind. Get the power of information visualization. A Picture Is Worth a Thousand Folders. Why teenagers are so resistant to e-readers There seems to be an idea spouted by many working in the media at the moment, that young people are giving up on traditional media. The BBC took BBC Three off our TV screens recently as it moves online to further target that lucrative 16-24 demographic. The BBC Trust claimed that there was “clear public value in moving BBC Three online, as independent evidence shows younger audiences are watching more online and watching less linear TV”.

Five days at outdoor education camp without screens improves preteen skills with nonverbal emotion cues Open Access Highlights Preteens spent five days in a nature camp without access to screens and were compared to controls. Both groups took pre- and post-tests regarding nonverbal emotional cues. The experimental group’s recognition of cues improved significantly over the control. Time away from screen media, with increased social interaction, may improve comprehension of nonverbal emotional cues. Paper vs digital reading is an exhausted debate The digital revolution is going into a decline, Tim Waterstone told the Oxford literary festival. Well, it's an attention-grabbing statement, ideally suited to our culture of assertive headlines, but it's probably not true. That's not to say that the rapid growth of digital will necessarily continue, either, certainly not in markets that are already saturated with handheld devices.

Naomi Baron's Words Onscreen: The Fate of Reading in a Digital World Readers have been dreading the rise of e-books since before the technology even existed. A 1991 New York Times piece predicting the imminent invention of the personal e-reader spurred angry and impassioned letters to the editor. One reader wrote in to express his worry that the new electronic books wouldn't work in the bath. Twenty-three years later, half of American adults own an e-reading device. A few years ago, Obama set a goal of getting e-textbooks into every classroom by 2017. Neil Gaiman: Why our future depends on libraries, reading and daydreaming It’s important for people to tell you what side they are on and why, and whether they might be biased. A declaration of members’ interests, of a sort. So, I am going to be talking to you about reading. I’m going to tell you that libraries are important.

A Curriculum Staple: Reading Aloud to Teens Dana Johansen, a teacher at the Greenwich (CT) Academy, reads to eighth graders.Photo courtesy of Greenwich Academy. Every year, Beth Aviv, a high school English teacher in Westchester County, NY, asks her students, “How many of you were read to by a parent when you were little?” Last year, only a quarter of the class raised their hands. Aviv discovered these students were starved for storytelling. Taking Notes: Is The Pen Still Mightier Than the Keyboard? Educators are eager to know how the computers popping up in their classrooms actually affect student learning. Much of the research has focused on how computers and other digital devices increase the temptation and likelihood of multitasking, leading to lower comprehension and reduced productivity. But until now, few people have looked into whether the method of note-taking a student uses, such as typing on a computer or writing in longhand, affects how well he or she comprehends the lecture.

Amazon selling more Kindle ebooks than print books 6 August 2012Last updated at 08:51 ET The Kindle has been available in the UK for two years The UK's biggest book retailer Amazon now sells more ebooks than hardbacks and paperbacks combined, the company has said. For every 100 print books sold through the site, Amazon said it sold 114 titles for its Kindle e-reader device. Why can’t we read anymore? Spending time with friends, or family, I often feel a soul-deep throb coming from that perfectly engineered wafer of stainless steel and glass and rare earth metals in my pocket. Touch me. Look at me.

Hidden places - visitBerlin.de PT-BR When you go off the beaten path in Berlin, you have the chance to discover some wonderful places outside the city centre that tell as much about the history of Berlin.... The Dicke Marie (fat Mary) tree has experienced a great deal. About 800 or 900 years ago, when it first buried its roots in the Brandenburg sand, there were still bears... I Am Not My Disability: Outstanding Books For and About Young People with Disabilities - National Reading Campaign National Reading Campaign Every two years, the International Board on Books for Young People (IBBY) chooses outstanding books for and about young people with disabilities. This biennial selection draws attention to books published around the world that address special needs and situations and which encourage inclusion at every level. Outstanding titles, including the one below, become part of The IBBY Collection of Books for Young People with Disabilities. This one-of-a-kind collection is located in Canada at North York Central Library, part of the Toronto Public Library system.

How Memory, Focus and Good Teaching Can Work Together to Help Kids Learn Everyone has a pet theory on how to improve public education: better professional development for teachers, more money, better curriculum, testing for accountability, teacher incentives, technology, streamlined bureaucracy. Policymakers have been trying these solutions for years with mixed results. But those who study the brain have their own ideas for improving how kids learn: focus on teaching kids how to learn. “The more you teach students how to learn, the less time you have to spend teaching curriculum because they can [understand] it on their own,” said William Klemm, senior professor of neuroscience at Texas A&M University at the Learning and the Brain conference “Making Lasting Memories.” “I think the real problem is that students have not learned how to be competent learners,” he said.

Self-publishing a book: 25 things you need to know Note to readers: I originally published the article back in 2008 and have updated it a few times, most recently on June 13, 2012. This article primarily addresses self-publishing a print book, though many of the tips apply to e-books as well. For specific information about publishing an e-book, see my companion article, "How to self-publish an ebook."