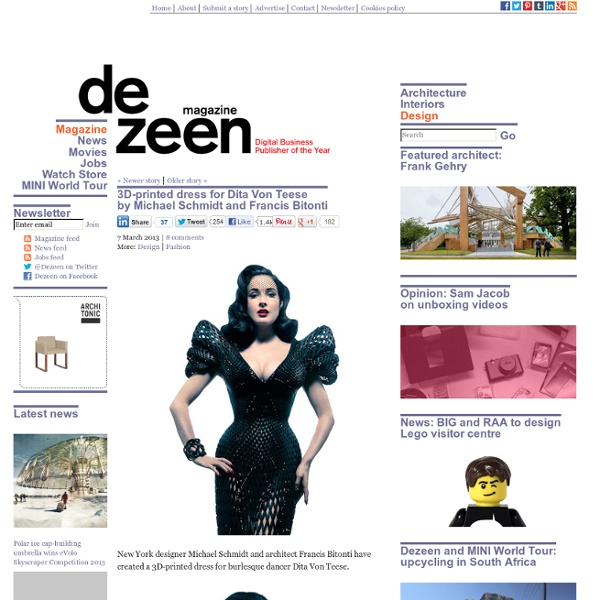 New York designer Michael Schmidt and architect Francis Bitonti have created a 3D-printed dress for burlesque dancer Dita Von Teese. Images above and top by Albert Sanchez. Designed by Schmidt and generated by Bitonti, the floor-length nylon gown was made using selective laser sintering (SLS), where material is built up in layers from plastic powder fused together with a laser. The rigid plastic components are fully articulated to create a netted structure that allows for movement. Spirals based on the Golden Ratio were applied to a computer rendering of Von Teese's body so the garment fits her exactly. Draped over a nude silk corset, the black-lacquered dress is cinched in at the waist and exaggerated at the shoulders, and embellished with 12,000 Swarovski crystals. Other 3D-printed fashion we've featured includes Iris van Herpen's outfits shown at Paris Fashion Week. Photos are by Jeff Meltz unless otherwise stated. See all our stories about 3D printing »See all our stories about fashion »

3D-printed car saves money, energy A 3D-printed electric car that is about to go into production boasts an ultra-strong, ultra-light chassis that can take on the rigours of the highway with ease. It wasn't long ago when 3D printing was a really cool concept that we liked to daydream about. Now, it's gearing up to change our lives. We've seen 3D-printed buildings, portraits, organs, prosthetics, food, couture, a moon base and even a pen for all your creative and repair needs. What's missing?

Combination CNC Machine and 3D Printer How to make your own 2D CNC machine that converts into a 3D Printer and back to a CNC machine in less than an hour. Costing less than a CNC machine or 3D printer! (~$1,000.00) In addition, the design will go further than the traditional 3D printer printing ABS/PLA, and move forward to printing with new materials such as 3D Printing Nylon derivatives like tauman 618 as well as Acrylic and PET. Latest Updates to this Instructable as of 9/12/2012: 1. There is a full 2BEIGH3 update here, along with a source for Nylon 3D Printing material here. 2. A 3-D Printer For Every Home! (Yeah, Right) There are a few Holy Grails on the Internet--things that thou shalt not touch because the Internet is still pretty much run by geeks. You can’t criticize the hilarity and hive mind intelligence of memes, even when they’re, you know, really stupid. You can’t discuss the potential reasoning behind DRM, even when, to be a little fair, the web is a fantasy land of copyright infringement. But maybe, more than any of these, thou shalt not question the obvious, inevitable future of 3-D printing. Because as we all know, one day, there will be a 3-D printer in every home, and when you need a new watch, pair of shoes or perfectly mapped sculpture of your inner ear canal, presto!, just print it!

N12 3D-printed bikini by Continuum Fashion and Shapeways The world's first 3D-printed bikini has gone on sale, created by designers Jenna Fizel and Mary Haung of Continuum Fashion. Called N12, the design comprises discs of varying sizes, linked together by springs. These circles are smaller on parts of the garment that need to curve round the body and larger on areas with flatter contours. The designers envisage that bespoke items of clothing could be made according to a body scan of the customer. The project was developed in collaboration with 3D-printing company Shapeways and can be purchased through the online shop. Photographs are by Ariel Efron. Print your own Google Glass and look the part Han Solo, Honest Abe, and even Aristotle are just a few of the people who look absolutely fantastic wearing their Google Glass computers. But unless you're a deep-pocketed developer from the US, chances are nil of getting anywhere near the audacious $1,500 spectacles. So why not do the next best thing and print a pair? That's exactly what Sander Veenhof and Klasien van de Zandschulp did, whom I discovered this morning in an Amsterdam cafe cheerfully muttering nonsense into their oblivious eyewear. The 3D printed glasses share all the notable design flourishes of the Google originals, including a small transparent "display" that had to be cut and affixed manually.

The Effect of University Monopoly Licensing in 3d Printing Inkjet powder 3d printers provide a useful case study for the effects of university exclusive patent licensing. In the early 90s, MIT researchers developed inkjet 3d printers. They built off much of the technology platform used for selective laser sintering powder-bed printers, which had been developed at the University of Texas in the mid 1980s, with a series of patents issuing. Here’s a brief overview. The feed and build tables, the counter-rotating roller used for spreading the powder, and the idea of storing a control file in computer memory to control the build were all out there, available to be used. The idea of building things out of powders in layers goes back yet earlier–to at least the work of Ross Housholder, who patented in 1981 an approach using heat to selectively bind powder deposited in layers.

about us We created Nervous System to explore a design approach that relates process and form in a context of interactivity and openness. Our trajectory focuses on generative design methods using both algorithmic and physical tools to create innovative products and environments. Formally we are attracted to complex and unconventional geometries. Architects are starting to 3D print houses—but without a house-sized printer A couple of months ago, Dutch architect Janjaap Ruijssenaars announced that he was building a curvy, loopy and for some reason, largely see-through building, to be made with the help of Enrico Dini’s D-Shape 3D printer. The project would cost up to 5 million euros ($6.4 million) and be completed in 2014. Janjaap Ruijssenaars’s twisty, loopy 3D-printed building.

3D printed moon building designs revealed 1 February 2013Last updated at 12:21 GMT The protective shell of the building is designed to be constructed on site by 3D printers Architects Fosters and Partners have revealed designs for a building on the Moon that could be constructed from material already on its surface. An inflatable structure would be transported from Earth, then covered with a shell built by 3D printers. The printers, operated by robots, would use soil from the Moon, known as regolith, to build the layered cover. The proposed site for the building is the southern pole of the Moon.

Calibration This page has been flagged as containing duplicate material that RepRapSoftwareTweakingManual also attempts to cover.These pages should be merged such that both pages do not attempt to cover the duplicate topics. ANNOUNCEMENT: If you search for the latest up-to-date guide please take a look at Triffid's Guide. Calibration is the collection of mechanical "tweaking" processes needed to get exact, quality prints. While your RepRap machine may be working as far as the electronics are concerned, calibration is necessary to have well printed parts. Without calibration, prints may not be the correct dimensions, they may not stick to the build surface, and a variety of other not-so-wanted effects can occur.