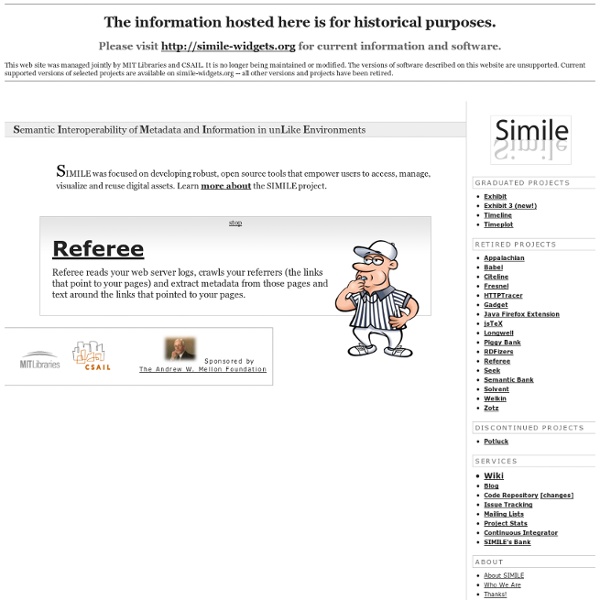 S IMILE was focused on developing robust, open source tools that empower users to access, manage, visualize and reuse digital assets. Learn more about the SIMILE project. A web-based highly-configurable faceted browser for RDF datasets. An extension to the Firefox Web browser that turns it into a Semantic Web browser letting you make use of existing information on the Web in more useful and flexible ways not offered by the original Web sites. A Firefox extension that helps you write Javascript screen scrapers for Piggy Bank. The server companion of Piggy Bank that lets you persist, share and publish data collected by individuals, groups or communities.

Gmail Shortcuts (printable cheatsheet) Gmail Shortcuts Key Definition Action c Compose Piggy Bank Piggy Bank Contributing Piggy Bank is an open source software and built around the spirit of open participation and collaboration. There are several ways you can help: Blog about Piggy Bank Subscribe to our mailing lists to show your interest and give us feedback Report problems and ask for new features through our issue tracking system (but take a look at our todo list first) Send us patches or fixes to the code Publish Semantic Web data on your web site (how-to) for Piggy Bank’s consumption Write and submit new screen scrapers for others to use Research

Backbone.js on Rails talk - Jason Morrison On Tuesday, September 20, I gave a talk at the New Hampshire Ruby Users Group on Backbone.js on Rails. I’ll be giving a very similar talk on Tuesday, October 11 at boston.rb and a version more targeted to front-end developers on Wednesday, October 26 at the Boston Front End Developers meetup I have posted the Backbone.js on Rails slides online, and the slide source is on my GitHub. As an aside, I’m using landslide for the slides – I love the resulting HTML and interface, though I’ve heard great things about deck.js. People found the resources sections useful.

Solvent Solvent Why do I need screen scrapers? Piggy Bank needs web pages to embed information in a format that it can understand. This format is called RDF (Resource Description Framework) and its main advantage is that makes machine processing a lot easier. Resque with Redis To Go - Resque is a queueing system that is backed by Redis. Common use cases include sending emails and processing data. For more information about Resque itself, visit This tutorial will cover setting up Resque with Rails and Redis To Go. Online Access The DBpedia data set can be accessed online via a SPARQL query endpoint and as Linked Data. 1. Querying DBpedia The DBpedia data set enables quite astonishing query answering possibilities against Wikipedia data. 1.1. Backbone.js TDD with jasmine part one: The model - Łukasz Kazimierz Bandzarewicz Initial Ruby on Rails application The initial rails application can be downloaded from github repo: 000-basic-app@tdd-with-backbonejs The basic application provides model Task(name: string, complete: boolean) and corresponding controller with RESTFUL json interface:

DBPedia and JQuery I was wondering if I can develop and app using DBPedia as well as JQuery ajax. Since most of the people out here were looking around for a simple demo application where they can utilize the power of semantic web to get some interesting data as well as some easy way to do so.After this tutorial I guess you will have a fare idea to start to build your first semantic web app. So I came up with a small project called “ Know India “. This project concentrates on showing various information from different stated of India. Understanding Type Families - Everything You Need to Know Introduction Bold, italic, condensed, black, Roman? What does it all mean? Getting started with typography can be a little confusing.