Understanding Linked Data Formats. Turtle vs RDF/XML vs N-Triples vs JSON-LD In my previous article I discussed the power of linked data and the advantages of RDF. 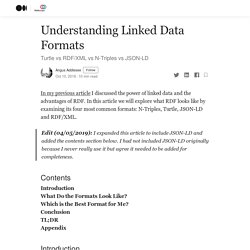 In this article we will explore what RDF looks like by examining its four most common formats: N-Triples, Turtle, JSON-LD and RDF/XML. Edit (04/05/2019): I expanded this article to include JSON-LD and added the contents section below. I had not included JSON-LD originally because I never really use it but agree it needed to be added for completeness. IntroductionWhat Do the Formats Look Like? Very simply, linked data is stored as triples that consist of a subject, predicate and object. In this example we can see that Tokyo is located in the country Japan and has an area of 2188km².

Google Structured Data Markup Helpers by □ Classy Schema. Position Statement: The RDF* and SPARQL* Approach to Annotate Statements in RDF and to Reconcile RDF and Property Graphs. 2 people like this post. 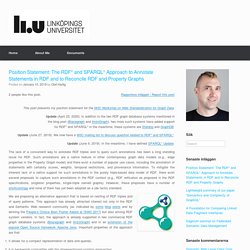 This post presents my position statement for the W3C Workshop on Web Standardization for Graph Data. Update (April 23, 2020): In addition to the two RDF graph database systems mentioned in the blog post (Blazegraph and AnzoGraph), two more such systems have added support for RDF* and SPARQL* in the meantime; these systems are Stardog and GraphDB. Update (June 27, 2019): We now have a W3C mailing list to discuss question related to RDF* and SPARQL*. Update (June 9, 2019): In the meantime, I have defined SPARQL* Update. The lack of a convenient way to annotate RDF triples and to query such annotations has been a long standing issue for RDF. Ending the RDF vs. Property Graph debate with RDF* - AI Business.

For a long time, there were only two main types of graph databases: Resource Description Framework (RDF) and Labeled Property Graphs (LPGs). 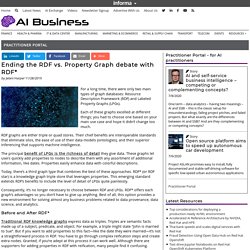 Each of these graphs excelled at different things; you had to choose one based on your main use case and hope it didn’t change too much. RDF graphs are either triple or quad stores. Their chief benefits are interoperable standards that eliminate silos, the ease of use of their data models (ontologies), and their superior inferencing that supports machine intelligence. The principal benefit of LPGs is the richness of detail they give data. These graphs let users quickly add properties to nodes to describe them with any assortment of additional information, like dates. Today, there’s a third graph type that combines the best of these approaches. OWL 2 Validator. Validating RDF data with SHACL. Last month, in The W3C standard constraint language for RDF: SHACL, I described the history of this new standard that lets us define constraints on RDF data and an open source tool that lets us identify where such constraints were violated. 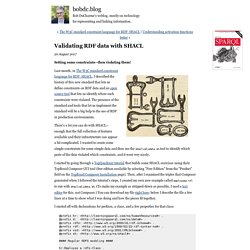 The presence of the standard and tools that let us implement the standard will be a big help to the use of RDF in production environments. There's a lot you can do with SHACL--enough that the full collection of features available and their infrastructure can appear a bit complicated. I wanted to create some simple constraints for some simple data and then use the shaclvalidate.sh tool to identify which parts of the data violated which constraints, and it went very nicely. I started by going through a TopQuadrant tutorial that builds some SHACL exercises using their TopBraid Composer GUI tool (free edition available by selecting "Free Edition" from the "Product" field on the TopBraid Composer Installation page). 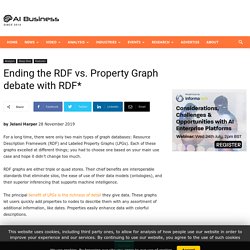 Each of these graphs excelled at different things; you had to choose one based on your main use case and hope it didn’t change too much. Graph Data Model. RDF Schema. Our solutions. The ISA² Programme has developed a number of semantic specifications and interoperability solutions which are available to public administrations, namely: the e-Government Core Vocabularies, the DCAT Application Profile for Data Portals in Europe (DCAT-AP) and the Asset Description Metadata Schema (ADMS). e-Government Core Vocabularies These are simplified, reusable, and extensible data models that capture the fundamental characteristics of an entity, such as a person or a public organisation, in a context-neutral manner. 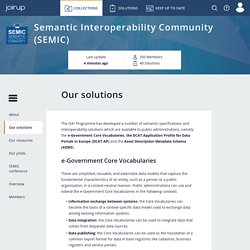 Public administrations can use and extend the e-Government Core Vocabularies in the following contexts: Information exchange between systems: the Core Vocabularies can become the basis of a context-specific data model used to exchange data among existing information systems. From Taxonomies over Ontologies to Knowledge Graphs - Semantic Web Company. With the rise of linked data and the semantic web, concepts and terms like ‘ontology’, ‘vocabulary’, ‘thesaurus’ or ‘taxonomy’ are being picked up frequently by information managers, search engine specialists or data engineers to describe ‘knowledge models’ in general. 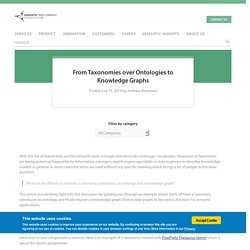 In many cases the terms are used without any specific meaning which brings a lot of people to the basic question: What are the differences between a taxonomy, a thesaurus, an ontology and a knowledge graph? This article should bring light into this discussion by guiding you through an example which starts off from a taxonomy, introduces an ontology and finally exposes a knowledge graph (linked data graph) to be used as the basis for semantic applications. 1. Validata: RDF Validator. RDFa 1.1 Validator.

This is validator is meant to validate RDFa content in an HTML or an XML file. 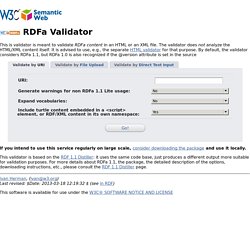 The validator does not analyze the HTML/XML content itself. It is advised to use, e.g., the separate HTML validator for that purpose. By default, the validator considers RDFa 1.1, but RDFa 1.0 is also recognized if the @version attribute is set in the source. NCBI RDF URI Standards – Linked Data for Professional Education. Topic: Publishing RDF; Competency: Determines whether to use hash (#) or slash (/). 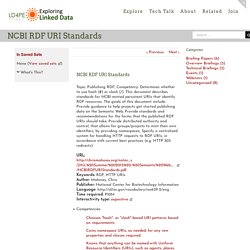 This document describes standards for NCBI-minted persistent URIs that identify RDF resources. The goals of this document include: Provide guidance to help projects get started publishing data on the Semantic Web; Provide standards and recommendations for the forms that the published RDF URIs should take; Provide distributed authority and control, that allows for groups/projects to mint their own identifiers, by providing namespaces; Specify a centralized system for handling HTTP requests to RDF URIs, in accordance with current best practices (e.g. Hash vs. Slash: What Is Identified? from Sean B. Palmer on 2001-11-28 (www-archive@w3.org from November 2001) To hash or to slash... here are some things to consider. 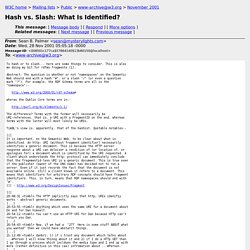 This is also me doing my bit for rdfms-fragments [1]. Abstract: The question is whether or not "namespaces" on the Semantic Web should end with a hash "#", or a slash "/" (or even a question mark "? "). For example, the RDF Schema terms are all in the "namespace":- wheras the Dublin Core terms are in:- The difference? Terms with the former will necessarily be URI-references, that is, a URI with a FragmentID on the end, whereas terms with the latter will most likely be URIs.

TimBL's view is, apparently, that of the hashist. Received on. Language tags in HTML and XML. Overview Terminology In this article we refer to the value of a language attribute such as fr-CA as a language tag. The fr and CA parts are referred to as subtags when described as parts of a tag. When described as members of an ISO list of languages or countries, fr and CA are referred to as codes. Language tags are used to indicate the language of text or other items in HTML and XML documents. In both cases, language information is inherited by elements inside the one where the declaration was made, unless one of those elements declares a different language (in the same way). RFCs are what the IETF calls its specifications. Language subtag lookup app. BCP 47 language tags are built from subtags in the IANA Subtag Registry.

Haystack Blog » A Quick Tutorial on the Turtle RDF Serialization. This post was going to be an email to a project mate in my database class, but I found myself wanting to markup the text in HTML so I figured I’d put it here. Unlike web specifications like HTML, which have only one representation on paper/disk, RDF is just an abstract model — it doesn’t matter how you represent it as long as you stay true to its abstract properties. So one of the first things people ask when it comes to RDF is, “Ok, so how to I write it?” If you Google the web for this answer, you will probably come up with RDF/XML as your answer, which is the “official” representation. Unfortunately it is also a pretty painful and hard-to-read one, too. It would be as if the United States made its official food the brussel sprout. So this is a quick tutorial in Turtle, one of the more humane RDF serializations, IMHO, because it is simple to understand, quite readible/editable in raw form by a human, and relatively compact as far as RDF goes.

Rdfabout/intro-to-rdf.md at gh-pages · JoshData/rdfabout. The Difference Between URLs and URIs. URI Conventions (OData Version 2.0) · OData - the Best Way to REST. OData Version 4.0 is the current recommended version of OData. OData V4 has been standardized by OASIS and has many features not included in OData Version 2.0. Go to OData Version 4.0 Introduction The Open Data Protocol (OData) enables the creation of REST-based data services, which allow resources, identified using Uniform Resource Identifiers (URIs) and defined in a data model, to be published and edited by Web clients using simple HTTP messages.

This specification defines a set of recommended (but not required) rules for constructing URIs to identify the data and metadata exposed by an OData server as well as a set of reserved URI query string operators, which if accepted by an OData server, MUST be implemented as required by this document. It is encouraged that servers follow the URI construction conventions defined in this specification when possible as such consistency promotes an ecosystem of reusable client components and libraries. 1. 2. 3. The Registry! RDF data model and storage. Tutorial: Jena Semantic Web Framework. Today I was poking around the Jena RDF Framework, mostly to figure out how one would use an OWL reasoner there.

Bio2RDF v2.7a. RDA Registry. The Music Ontology – Getting started. The Music Ontology – Specification. The Music Ontology Specification provides main concepts and properties fo describing music (i.e. artists, albums and tracks) on the Semantic Web. Welcome to the OpenUp Data Enrichment Service. OpenUp Client The OpenUp Client allows you to access DES functionality from any web page you are browsing. Simply drag the bookmarklet link below onto your toolbar and click on it when you want to know more! It's still experimental so there may be the odd glitch! RDF and JSON: A Clash of Model and Syntax – Lost Boy. I had been meaning to write this post for some time.