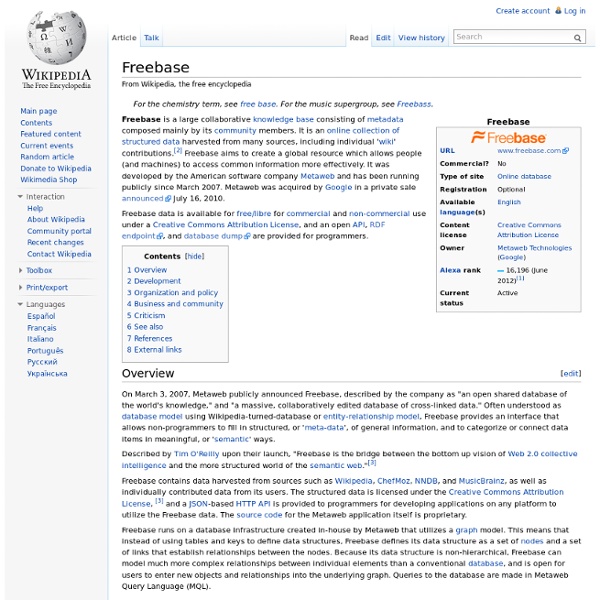 Freebase is a large collaborative knowledge base consisting of metadata composed mainly by its community members. It is an online collection of structured data harvested from many sources, including individual 'wiki' contributions.[2] Freebase aims to create a global resource which allows people (and machines) to access common information more effectively. It was developed by the American software company Metaweb and has been running publicly since March 2007. Metaweb was acquired by Google in a private sale announced July 16, 2010.[3] Google's Knowledge Graph is powered in part by Freebase.[4] Freebase data is freely available for commercial and non-commercial use under a Creative Commons Attribution License, and an open API, RDF endpoint, and database dump are provided for programmers. Overview[edit] Described by Tim O'Reilly upon their launch, "Freebase is the bridge between the bottom up vision of Web 2.0 collective intelligence and the more structured world of the semantic web

Visual Data Web - Visually Experiencing the Data Web Aurelius | Applying Graph Theory and Network Science YAGO - D5: Databases and Information Systems (Max-Planck-Institut für Informatik) Overview YAGO is a huge semantic knowledge base, derived from Wikipedia WordNet and GeoNames. Currently, YAGO has knowledge of more than 10 million entities (like persons, organizations, cities, etc.) and contains more than 120 million facts about these entities. YAGO is special in several ways: The accuracy of YAGO has been manually evaluated, proving a confirmed accuracy of 95%. YAGO is developed jointly with the DBWeb group at Télécom ParisTech University.

Data Dumps - Freebase API Data Dumps are a downloadable version of the data in Freebase. They constitute a snapshot of the data stored in Freebase and the Schema that structures it, and are provided under the same CC-BY license. The Freebase/Wikidata mappings are provided under the CC0 license. Freebase Triples The RDF data is serialized using the N-Triples format, encoded as UTF-8 text and compressed with Gzip. < "2001-02"^^< . If you're writing your own code to parse the RDF dumps its often more efficient to read directly from GZip file rather than extracting the data first and then processing the uncompressed data. <subject><predicate><object> . Note: In Freebase, objects have MIDs that look like /m/012rkqx. The subject is the ID of a Freebase object. Topic descriptions often contain newlines. Freebase Deleted Triples The columns in the dataset are defined as: License

Semantic network Typical standardized semantic networks are expressed as semantic triples. History[edit] Example of a semantic network "Semantic Nets" were first invented for computers by Richard H. Richens of the Cambridge Language Research Unit in 1956 as an "interlingua" for machine translation of natural languages.[2] They were independently developed by Robert F. In the late 1980s, two Netherlands universities, Groningen and Twente, jointly began a project called Knowledge Graphs, which are semantic networks but with the added constraint that edges are restricted to be from a limited set of possible relations, to facilitate algebras on the graph.[12] In the subsequent decades, the distinction between semantic networks and knowledge graphs was blurred.[13][14] In 2012, Google gave their knowledge graph the name Knowledge Graph. Basics of semantic networks[edit] A semantic network is used when one has knowledge that is best understood as a set of concepts that are related to one another. Examples[edit]

Basic Concepts - Freebase API If you are new to Freebase, this section covers the basic terminology and concepts required to understand how Freebase works. Graphs Topics Freebase has over 39 million topics about real-world entities like people, places and things. Since Freebase data is represented a graph, these topics correspond to the nodes in the graph. However, not every node is a topic. Examples of the types of topics found in Freebase: Physical entities, e.g., Bob Dylan, the Louvre Museum, the Saturn planet, to Artistic/media creations, e.g., The Dark Knight (film), Hotel California (song), to Classifications, e.g., noble gas, Chordate, to Abstract concepts, e.g., love, to Schools of thoughts or artistic movements, e.g., Impressionism. Some topics are notable because they hold a lot of data (e.g., Wal-Mart), and some are notable because they link to many other topics, potentially in different domains of information. Types and Properties Any given topic can be seen for many different perspectives for example:

Mereology Mereology has been axiomatized in various ways as applications of predicate logic to formal ontology, of which mereology is an important part. A common element of such axiomatizations is the assumption, shared with inclusion, that the part-whole relation orders its universe, meaning that everything is a part of itself (reflexivity), that a part of a part of a whole is itself a part of that whole (transitivity), and that two distinct entities cannot each be a part of the other (antisymmetry). A variant of this axiomatization denies that anything is ever part of itself (irreflexive) while accepting transitivity, from which antisymmetry follows automatically. Standard university texts on logic and mathematics are silent about mereology, which has undoubtedly contributed to its obscurity. History[edit] A.N. In 1930, Henry Leonard completed a Harvard Ph.D. dissertation in philosophy, setting out a formal theory of the part-whole relation. Axioms and primitive notions[edit] The axioms are:

5 of the Best Free and Open Source Data Mining Software The process of extracting patterns from data is called data mining. It is recognized as an essential tool by modern business since it is able to convert data into business intelligence thus giving an informational edge. At present, it is widely used in profiling practices, like surveillance, marketing, scientific discovery, and fraud detection. There are four kinds of tasks that are normally involve in Data mining: * Classification - the task of generalizing familiar structure to employ to new data* Clustering - the task of finding groups and structures in the data that are in some way or another the same, without using noted structures in the data.* Association rule learning - Looks for relationships between variables.* Regression - Aims to find a function that models the data with the slightest error. For those of you who are looking for some data mining tools, here are five of the best open-source data mining software that you could get for free: Orange RapidMiner Weka JHepWork

Waikato Courses Introducing the Knowledge Graph: things, not strings Cross-posted on the Inside Search Blog Search is a lot about discovery—the basic human need to learn and broaden your horizons. But searching still requires a lot of hard work by you, the user. So today I’m really excited to launch the Knowledge Graph, which will help you discover new information quickly and easily. Take a query like [taj mahal]. But we all know that [taj mahal] has a much richer meaning. The Knowledge Graph enables you to search for things, people or places that Google knows about—landmarks, celebrities, cities, sports teams, buildings, geographical features, movies, celestial objects, works of art and more—and instantly get information that’s relevant to your query. Google’s Knowledge Graph isn’t just rooted in public sources such as Freebase, Wikipedia and the CIA World Factbook. The Knowledge Graph enhances Google Search in three main ways to start: 1. 2. How do we know which facts are most likely to be needed for each item? 3.

untitled Part I. Getting Started Chapter 1. 1.1. rdf:about Sesame 2 ¶ 1.1.1. Sesame is an open source Java framework for storage and querying of RDF data. Of course, a framework isn't very useful without implementations of the various APIs. Originally, Sesame was developed by Aduna (then known as Aidministrator) as a research prototype for the hugely successful EU research project On-To-Knowledge. Sesame is currently developed as a community project, with Aduna as the project leader. 1.1.2. This user manual covers most aspects of working with Sesame in a variety of settings. The basics of programming with Sesame are covered in chapter-repository-api. chapter-http-protocol gives an overview of the structure of the HTTP REST protocol for the Sesame Server, which is useful if you want to communicate with a Sesame Server from a programming language other than Java. Chapter 2. 2.1. Sesame releases can be downloaded from Sourceforge. openrdf-sesame-(version)-sdk.tar.gz. 2.1.1. 2.1.2. 2.2. 2.3. 2.3.1.

Data science Data Science Data science is the study of the generalizable extraction of knowledge from data,[1] yet the key word is science.[2] It incorporates varying elements and builds on techniques and theories from many fields, including signal processing, mathematics, probability models, machine learning, computer programming, statistics, data engineering, pattern recognition and learning, visualization, uncertainty modeling, data warehousing, and high performance computing with the goal of extracting meaning from data and creating data products. Data Science need not be always for big data, however, the fact that data is scaling up makes big data an important aspect of data science. A practitioner of data science is called a data scientist. Good data scientists are able to apply their skills to achieve a broad spectrum of end results. History[edit] On 10 November 1998, C.F. In 2001, William S. Domain Specific Interests[edit] Data science is the practice of deriving valuable insights from data.