My Blackberry Is Not Working! - The One Ronnie, Preview - BBC One 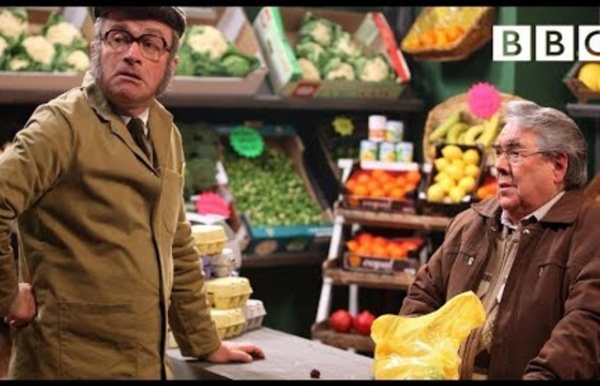 WMDs, RGPs, DHS: how the Iraq war transformed the English language War leaves indelible marks on our language. How could it be otherwise? Turn on the news anytime in the last 10 years and you were greeted with an alphabet soup of RPGs, UAVs, DHS and the ubiquitous (until we couldn't find them) WMDs. Open the paper, and you'd have to pick your way through the minefield of "sectarian violence", "collateral damage" and "enhanced interrogation techniques". Call your cousin or your mother and the conversation ebbs and flows with "surge" and "drawdown". From Skedaddle to Selfie: Words of the Generations by Allan Metcalf – review Previously, Allan Metcalf, a professor of English at MacMurray College in Jacksonville, Illinois, has written a whole book devoted to “America’s greatest word”: OK (or “K”, as my 16-year-old daughter likes to “abbrev” it, presumably to save energy in her texting thumb). This new slimmer volume goes at the etymology of American slang from a different direction; it sets out, somewhat haphazardly, to define the character of generations from the words they coin. OK itself was by this reckoning a “product of the transcendental generation”, though you can’t quite imagine Thoreau having much use for it as he contemplated Walden Pond. It was invented in 1839 by Charles Gordon Greene, editor of the Boston Morning Post, in a story full of other “humorous contractions” such as RTBS (remains to be seen).

Borrowed words in English: tracing the changing patterns In Borrowed Words: A History of Loanwords in English I examine how words borrowed from different languages have influenced English throughout its history. The above feature summarizes some of the main data from the book, focussing on the fourteen sources that have given the most words to English, as reflected by the new and revised entries in the Oxford English Dictionary. Using the date buttons at the top of the graphic, you can compare the impact that different languages have made on English over time. In the “per period” view, you can see the proportions of words coming into English from each source in 50-year slices from 1150 up to the present day. Compare for instance how the input from German has grown and then declined again from 1800 to the present day.

'Hobbitses' and Frankenstein: how pop culture's words become official Water cooler conversation at a dictionary company tends towards the odd. A while ago I was chatting with one of my colleagues about our respective defining batches. "I'm not sure," he said, "what to do about the plural of 'hobbit'. Allow me to womansplain the problem with gendered language She is a #Girlboss. She is a mumtrepreneur. She is a SheEO. He is a manterrupter. A mansplainer. ‘Golly’, ‘cassette’ and ‘croquet’: the words we no longer use A huge ongoing study by Lancaster University and Cambridge University has discovered what, in fact, we probably knew already: that word-usage changes continuously under the pressures of historical malaise, new sensitivities, the new machineries of life and fashion. “Golly” is fast going. No need to ask why.

Academics uncover 30 words 'lost' from English language Snout-fair, dowsabel and percher are among 30 "lost" words which experts believe are still in current use. Researchers have drawn up the list to persuade people that these defunct words can still have a relevance. Snout-fair is a word for handsome, dowsabel means "lady-love", and a percher is a social climber. Dominic Watt, senior linguistics lecturer at the University of York, said he hoped people would re-engage with the language of old. The team spent three months searching through old books and dictionaries to create the list.

Revealed: How Harry Potter has shaped the way we speak Calling all muggles and mudbloods, dementors and squibs, Harry Potter is 20 this year. The boy wizard’s first adventure hit our bookshelves in 1997, and has had a huge influence on all aspects of popular culture. But what about the way we speak? To mark the anniversary the Cambridge University Press has looked into the many words invented by JK Rowling, to find out how deep an effect her Wizarding World has had. Matt Norton, CUP’s resident language researcher, donned his cloak to analyse data from the Cambridge English Corpus, a multi-billion word collection of contemporary spoken and written English, to find out the ‘Potterverse’ words that have made their way into everyday dialogue. In a blog on the CUP website, he says: “I use corpus linguistics to examine how the world of Harry Potter – or the ‘Potterverse’ – has influenced English with new words invented by Rowling (“coinings”); her reusing of rare or obscure words; and changes to existing word usage.”

Inside the OED: can the world’s biggest dictionary survive the internet? In February 2009, a Twitter user called @popelizbet issued an apparently historic challenge to someone called Colin: she asked if he could “mansplain” a concept to her. History has not recorded if he did, indeed, proceed to mansplain. But the lexicographer Bernadette Paton, who excavated this exchange last summer, believed it was the first time anyone had used the word in recorded form.

Weekly Word Watch: muggle off, munchkin, and päntsdrunk We’ve got a hearty serving of words this week, generously topped with mayonnaise, mispronunciations, and M-words. Let’s dig in. The new series of ITV2’s smash reality hit Love Island is back on air. Some of us (hate-)watch for the programme’s sexy sensationalism. Others – like us word nerds at Oxford Dictionaries, monitor the drama for its language (we swear) – as the show has previously popularised slang, such as total melt, or ‘idiot, loser’.

New Year, New Words While I may be a prescriptivist (one who believes in following rules) in my approach to grammar and usage, a friend pointed out (correctly) that I stray over into the descriptivist camp (one who accepts the ever-changing nature of language and describes it as currently used) in my approach to new words. I love all words, be they old or new! Our language reflects our cultural identity as well as our values, so as these change, so do the words we use. How social media is changing language From unfriend to selfie, social media is clearly having an impact on language. As someone who writes about social media I’m aware of not only how fast these online platforms change, but also of how they influence the language in which I write. The words that surround us every day influence the words we use. Since so much of the written language we see is now on the screens of our computers, tablets, and smartphones, language now evolves partly through our interaction with technology. And because the language we use to communicate with each other tends to be more malleable than formal writing, the combination of informal, personal communication and the mass audience afforded by social media is a recipe for rapid change.