The Semantic Web: An Introduction 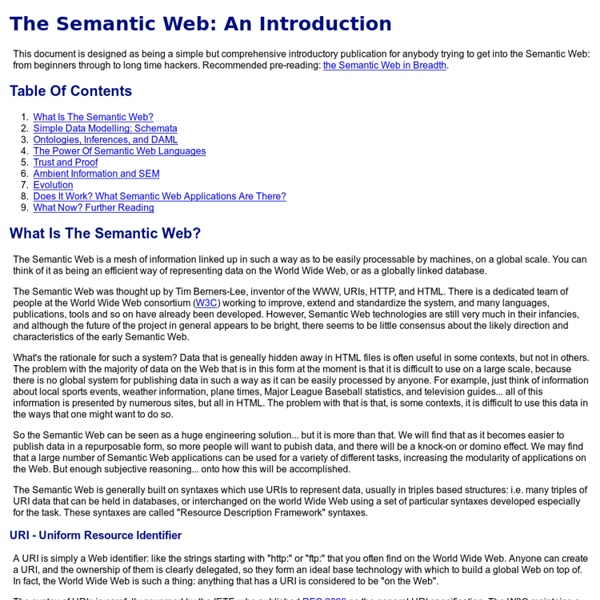 This document is designed as being a simple but comprehensive introductory publication for anybody trying to get into the Semantic Web: from beginners through to long time hackers. Recommended pre-reading: the Semantic Web in Breadth. Table Of Contents What Is The Semantic Web? The Semantic Web is a mesh of information linked up in such a way as to be easily processable by machines, on a global scale. You can think of it as being an efficient way of representing data on the World Wide Web, or as a globally linked database. The Semantic Web was thought up by Tim Berners-Lee, inventor of the WWW, URIs, HTTP, and HTML. What's the rationale for such a system? So the Semantic Web can be seen as a huge engineering solution... but it is more than that. URI - Uniform Resource Identifier A URI is simply a Web identifier: like the strings starting with "http:" or "ftp:" that you often find on the World Wide Web. RDF - Resource Description Framework A triple can simply be described as three URIs. Logic

What is the Semantic Web? Introduction Many people are not clear as to what the Semantic web is, and as we are the Semantic Web Agreement Group, we need to define it for people. Therefore, here is an attempt at a clear view of the Semantic Web:- The Semantic Web is a Web that includes documents, or portions of documents, describing explicit relationships between things and containing semantic information intended for automated processing by our machines. It operates on the principle of shared data. Clear Intent Although the SW is a Web of data, it is intended primarily for humans; it would use machine processing and databases to take away some of the burdens we currently face so that we can concentrate on the more important things that we can use the Web for. Practical solutions include the use of XSLT to derive RDF from XML sources, the work on topic maps and RDF convergence, the emergence of general-purpose RDF databases and engines, and general and specific GUIs for RDF data. - XML.com An Example Data:- Filter:-

Semantic Web I have an idea that I think is very important but I haven’t yet polished to the point where I’m comfortable sharing it. I’m going to share it anyway, unpolished, because I think it’s that useful. So here I am, handing you a dull, gray stone, and I’m saying there’s a diamond inside. The problem I’m trying to solve is at the core of decentralized (or loosely-coupled) systems. RDF offers a solution to this, but it turns out to be pretty hard to put into practice. Consider two on-the-web temperature sensors: The careful human reader will immediately wonder whether these temperatures are in Celcius or Fahrenheit, or if maybe the first is in Celcius and the second Fahrenheit. Here’s the first sketch of my solution: I know it looks ugly, but now it’s clear that both readings are in Fahrenheit. My proposal is that much like some data-consuming systems do schema validation now, GrowJSON data-consuming systems would actually look for that exact definition string. That’s the essence of the idea. No.

The US sub-prime crisis The US sub-prime mortgage crisis has led to plunging property prices, a slowdown in the US economy, and billions in losses by banks. It stems from a fundamental change in the way mortgages are funded. Traditionally, banks have financed their mortgage lending through the deposits they receive from their customers. This has limited the amount of mortgage lending they could do. In recent years, banks have moved to a new model where they sell on the mortgages to the bond markets. This has made it much easier to fund additional borrowing, But it has also led to abuses as banks no longer have the incentive to check carefully the mortgages they issue. In the past five years, the private sector has dramatically expanded its role in the mortgage bond market, which had previously been dominated by government-sponsored agencies like Freddie Mac. They also included "jumbo" mortgages for properties over Freddie Mac's $417,000 (£202,000) mortgage limit. But no one is sure how long the slowdown will last.