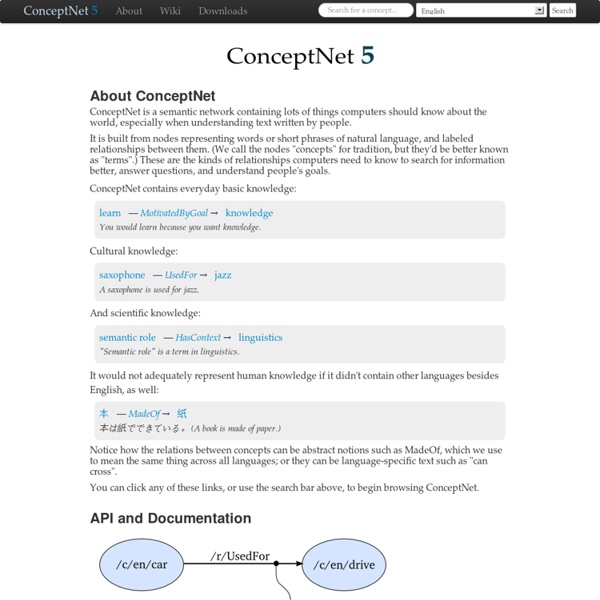 ReVerb - Open Information Extraction Software Open Mind Common Sense Software agent In computer science, a software agent is a computer program that acts for a user or other program in a relationship of agency, which derives from the Latin agere (to do): an agreement to act on one's behalf. Such "action on behalf of" implies the authority to decide which, if any, action is appropriate.[1][2] Related and derived concepts include intelligent agents (in particular exhibiting some aspect of artificial intelligence, such as learning and reasoning), autonomous agents (capable of modifying the way in which they achieve their objectives), distributed agents (being executed on physically distinct computers), multi-agent systems (distributed agents that do not have the capabilities to achieve an objective alone and thus must communicate), and mobile agents (agents that can relocate their execution onto different processors). Concepts[edit] The basic attributes of a software agent are that agents Nwana's Category of Software Agent Distinguishing agents from programs[edit]

tdwg-rdf - TDWG RDF/OWL Task Group Background The RDF/OWL Best Practices Task Group is part of Biodiversity Information Standards (TDWG; ). Its purpose is to adapt TDWG vocabularies for use as RDF classes and properties and to integrate those resources with other well-known vocabularies and ontologies outside TDWG for use in describing biodiversity resources. Group discussions are conducted via an email list hosted and archived at . Please visit that site to request an invitation to be added to the list. The issues tracker is set up to handle specific best-practices recommendations, missing terms, etc. Our charter was approved by the TDWG executive at the 2011 meeting in New Orleans. RDF Sandboxes/Development platforms The sandboxes are places to experiment with RDF. Two triple stores available here, one based on 4store, one based on AllegroGraph . Beginner's Guide to RDF Click here to go to the Introduction of the Guide

MIT Media Lab: Design Ecology / Information Ecology The Surprising Path Of Artificial Intelligence Editor’s note: This is Part I of a three-part guest post written by legendary Silicon Valley investor Vinod Khosla, the founder of Khosla Ventures. In Part II, he will describe how software and mobile technologies can augment and even replace doctors. In Part III, he will talk about how technology will sweep through education. Forty years ago this December, President Nixon declared a war on cancer, pledging a “total national commitment” to conquering the disease. Fifty years ago this spring, President Kennedy declared a space race, promising to land a man safely on the moon before the end of the decade. Though we made it to the moon the efforts in cancer and artificial intelligence have failed in their larger ambitions but have made progress. Rather than the brute force logic-based development that was envisioned with Commander Data, successful systems have been built from examples rather than logical rules. Where will these advances in computing lead us in the next decade?

SemanticWebTools - W3C Wiki From W3C Wiki REDIRECT New SemanticWiki Tools Page As of 12:50, 14 January 2010, this page is no longer maintained and should not be changed. The content has been transferred to . (Changes made here after the above date may not be reflected on the new page !) Please consult and possibly modify that page . Table of Contents: This page contains the information on RDF and OWL tools that used to be listed on the home pages of the RDF and OWL Working Groups at W3C. This Wiki page is only for programming and development tools. There are other pages on tool collection, largely overlapping with this, but possibly with a different granularity or emphasis. There are also separate pages maintained on this Wiki for: SPARQL implementations , set up by the SPARQL Working Group (although most of the information is present on this page, too) SPARQL "endpoints" , examples of using SPARQL in exposing various data. Adobe's XMP Altova's SemanticWorks Amilcare Arity's LexiLink Rej

Object-Based Media Group, MIT Media Laboratory The Rise of the Artifical-Intelligence Economy - Megan McArdle - Business Adam Ozimek -- blogger at Modeled Behavior and associate at Econsult Corporation As a child I used to read my grandfather's Popular Science and Popular Mechanics magazines. The constant promise and inevitable disappointment of amazing technologies that mostly never materialized (a problem likely exacerbated by my focus on the amazing and outlandish ones) made me skeptical of futurist predictions. It is somewhat strange then, that I now commonly find myself a proponent of futurist visions equally as grand as those that once made me a cynic. But I'm not alone in seeing the near future as a quickly changing technological landscape. They present two convincing cases of technology changing quicker than we would have thought. The... truck driver is processing a constant stream of [visual, aural, and tactile] information from his environment. ... Yet despite how difficult this challenge seemed just a few years ago, Google has made astounding headway in building a functioning driverless car.