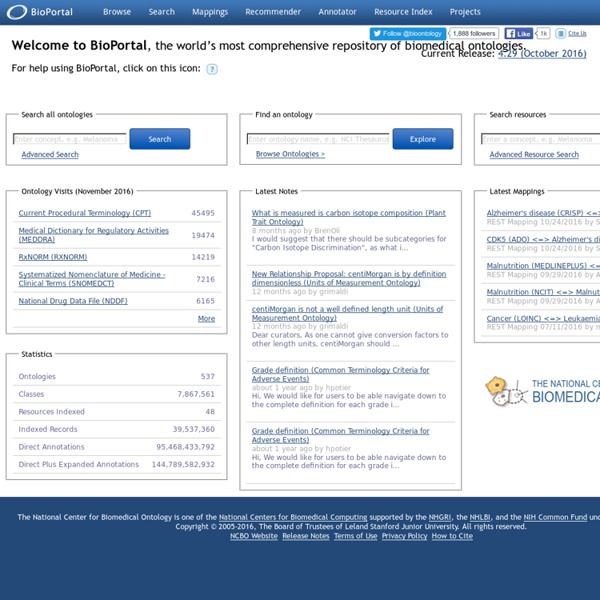 MGED Welcome to the website of the ontology working group for the MGED project, which is charged with developing an ontology for describing samples used in microarray experiments. What is an Ontology? From the Stanford Knowledge Systems Lab:"An ontology is an explicit specification of some topic. For our purposes, it is a formal and declarative representation which includes the vocabulary (or names) for referring to the terms in that subject area and the logical statements that describe what the terms are, how they are related to each other, and how they can or cannot be related to each other.

Ontology (information science) In computer science and information science, an ontology formally represents knowledge as a hierarchy of concepts within a domain, using a shared vocabulary to denote the types, properties and interrelationships of those concepts.[1][2] Ontologies are the structural frameworks for organizing information and are used in artificial intelligence, the Semantic Web, systems engineering, software engineering, biomedical informatics, library science, enterprise bookmarking, and information architecture as a form of knowledge representation about the world or some part of it. The creation of domain ontologies is also fundamental to the definition and use of an enterprise architecture framework. The term ontology has its origin in philosophy and has been applied in many different ways. The word element onto- comes from the Greek ὤν, ὄντος, ("being", "that which is"), present participle of the verb εἰμί ("be").

Marine Metadata Interoperability Marine Science and the Semantic Web MMI has long considered a semantic component critical to enabling the highest levels of data interoperability. To that end, MMI has developed a set of guidance documents, worked with the marine science community to establish a set of best practices, and developed tools to allow users to work with semantic technologies without becoming bogged down in the intricacies of the semantic web. The resulting Semantic Framework will facilitate data interoperability in the marine science community while providing linkages to the broader semantic web.

SNOMED Clinical Terms - Summary SNOMED CT has been created by combining SNOMED RT and a computer-based nomenclature and classification known as Read Codes Version 3, which was created on behalf of the U.K. Department of Health and is a Crown copyright. SNOMED CT Concept (SNOMED RT+CTV3) SNOMED CT January 2005 Release: 20050131 [R] Hey Zuck, We Built Your Office A.I. Solution - Algorithmia Like many, we were pretty inspired by Mark Zuckerberg’s 2016 personal challenge to build some artificial intelligence tools to help him at home and work. We spend a lot of time at Algorithmia helping developers add algorithmic intelligence to their apps. So, with a hat tip to Zuck, we recently challenged ourselves to see what kind of A.I. solution we could come up with during a recent internal hackathon. UPDATE (12.29.16): Zuckerberg made good on his 2016 personal challenge in a post where he details how he built an AI assistant to control aspects of his home, like the lights, temperature, appliances, music and security, what he learned over the 100-150 hours spent working on it, and what’s next for his AI assistant.

Evaluation Evaluation is often used to characterize to Only on, Rated, Created by, Exclusively on, Only from, Only at, Get it at, Designed for, Written by, Directed by, Produced by, Here on, Headquartered in, Located in, Do not, Available for, Available at and Has been. Definition[edit] Evaluation is the structured interpretation and giving of meaning to predicted or actual impacts of proposals or results. It looks at original objectives, and at what is either predicted or what was accomplished and how it was accomplished. So evaluation can be formative, that is taking place during the development of a concept or proposal, project or organization, with the intention of improving the value or effectiveness of the proposal, project, or organisation. It can also be assumptive, drawing lessons from a completed action or project or an organisation at a later point in time or circumstance.

Semantic Annotation - Tag Metadata in Text - Ontotext Semantic annotation is the process of attaching additional information to various concepts (e.g. people, things, places, organizations etc) in a given text or any other content. Unlike classic text annotations for reader’s reference, semantic annotations are used by machines to refer to. When a document (or another piece of content, e.g. video) is semantically annotated it becomes a source of information that is easy to interpret, combine and reuse by our computers. If you are looking to provide high-quality content at low costs you should read our white paper on Dynamic Semantic Publishing. Create Smart Content with Machine-Processable Marginalia

Law "Legal concept" redirects here. Lady Justice, a symbol of justice. She is depicted as a goddess equipped with three items: a sword, symbolising the coercive power of a court; scales, representing an objective standard by which competing claims are weighed; and a blindfold indicating that justice should be impartial and meted out objectively, without fear or favor and regardless of money, wealth, power or identity.[1] Law is a term which does not have a universally accepted definition,[2] but one definition is that law is a system of rules and guidelines which are enforced through social institutions to govern behaviour.[3] Laws can be made by legislatures through legislation (resulting in statutes), the executive through decrees and regulations, or judges through binding precedents (normally in common law jurisdictions). Private individuals can create legally binding contracts, including (in some jurisdictions) arbitration agreements that exclude the normal court process.

Edge.org The phrase "news that stays news" was originally how Ezra Pound, in 1934, defined literature—and so it's interesting to contemplate what, in the sciences, might meet that same standard. The answer might be the emerging science of literature itself. Thinking about the means by which language works on the mind, Pound described a three-part taxonomy. First is phanopoeia—think "phantoms": the images that a word or phrase conjures in the reader's mind. Health Care Health care (or healthcare) is the diagnosis, treatment, and prevention of disease, illness, injury, and other physical and mental impairments in humans. Health care is delivered by practitioners in allied health, dentistry, midwifery-obstetrics , medicine, nursing, optometry, pharmacy and other care providers. It refers to the work done in providing primary care, secondary care, and tertiary care, as well as in public health. Access to health care varies across countries, groups, and individuals, largely influenced by social and economic conditions as well as the health policies in place. Countries and jurisdictions have different policies and plans in relation to the personal and population-based health care goals within their societies. Health care systems are organizations established to meet the health needs of target populations.

Link Grammar News July, 2018: link-grammar 5.5.1 released! See below for a description of recent changes. What is Link Grammar? The Link Grammar Parser is a syntactic parser of English, Russian, Arabic and Persian (and other languages as well), based on Link Grammar, an original theory of syntax and morphology. Given a sentence, the system assigns to it a syntactic structure, which consists of a set of labelled links connecting pairs of words. API In computer programming, an application programming interface (API) specifies how some software components should interact with each other. Detailed explanation[edit] API in procedural languages[edit] In most procedural languages, an API specifies a set of functions or routines that accomplish a specific task or are allowed to interact with a specific software component.

Meta-Optimizing Semantic Evolutionary Search - OpenCog Meta-optimizing semantic evolutionary search (MOSES) is a new approach to program evolution, based on representation-building and probabilistic modeling. MOSES has been successfully applied to solve hard problems in domains such as computational biology, sentiment evaluation, and agent control. Results tend to be more accurate, and require less objective function evaluations, than other program evolution systems, such as genetic programming or evolutionary programming . Best of all, the result of running MOSES is not a large nested structure or numerical vector, but a compact and comprehensible program written in a simple Lisp-like mini-language.