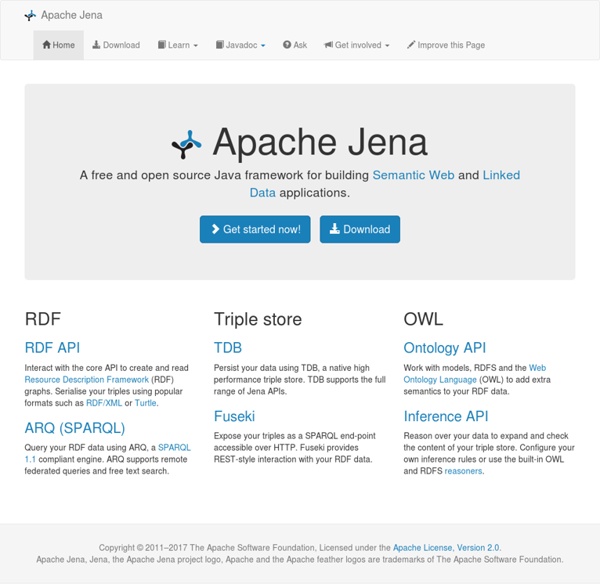 Defining the Semantic Web in a Few Sentences A Quora user posed this challenge to the network: “How do you explain semantic web to a nine-year old child in one sentence?” The challenge was followed by a quote from Albert Einstein: “If you can’t explain it to a six year old, you don’t understand it yourself.” Some of the best responses so far include, “A web where computers better understand the real meaning of the words we use to communicate with them.” “Hi Timmy, the web is like one giant big book written by a lot of people. And the semantic web is another book describing how the first book should be read.”

SPARQL Endpoint interface to Python This is a wrapper around a SPARQL service. It helps in creating the query URI and, possibly, convert the result into a more manageable format. The package is licensed under W3C license, and it can be downloaded in .zip and .tar.gz formats from GitHub, also from PyPi or from Debian, and eventually from SourceForge where was previously hosted. The following packages are used: for JSON, the simplejson package (for Python < 2.6) for RDF, the RDFLib package These packages are imported in a lazy fashion, ie, only when needed.

Linked data An introductory overview of Linked Open Data in the context of cultural institutions. In computing, linked data (often capitalized as Linked Data) describes a method of publishing structured data so that it can be interlinked and become more useful. It builds upon standard Web technologies such as HTTP, RDF and URIs, but rather than using them to serve web pages for human readers, it extends them to share information in a way that can be read automatically by computers. This enables data from different sources to be connected and queried.[1] Tim Berners-Lee, director of the World Wide Web Consortium, coined the term in a design note discussing issues around the Semantic Web project.[2] Principles[edit]

The Semantic Web in Action - Scientific American - December 2007 Lee Feigenbaum, Ivan Herman, Tonya Hongsermeier, Eric Neumann and Susie Stephens (See sidebar.) Six years ago in this magazine, Tim Berners-Lee, James Hendler and Ora Lassila unveiled a nascent vision of the Semantic Web: a highly interconnected network of data that could be easily accessed and understood by any desktop or handheld machine. They painted a future of intelligent software agents that would head out on the World Wide Web and automatically book flights and hotels for our trips, update our medical records and give us a single, customized answer to a particular question without our having to search for information or pore through results. Since then skeptics have said the Semantic Web would be too difficult for people to understand or exploit.

Linked Data - Design Issues Up to Design Issues The Semantic Web isn't just about putting data on the web. It is about making links, so that a person or machine can explore the web of data. Setting Gold Standards for the Semantic Web A new article out of AI3 discusses the need for so-called “gold standards” in the semantic web and examines several possible gold standards. As the article puts it, “The types of gold standards useful to the semantic Web are similar to those useful to our analogy of human languages. We need guidance on structure (syntax and grammar), plus reference vocabularies that encompass the scope of the semantic Web (that is, everything).” The gold standards that the author, Mike Bergman suggests are RDF, RDFS and OWL (building blocks for languages); Wikipedia (a “standard reference vocabulary of things, concepts, and entities”); WordNet (“lexical language references as an aid to natural language processing”); and UMBEL (“the structural reference for the connectedness of things”). The article goes on to discuss each potential gold standard in detail.