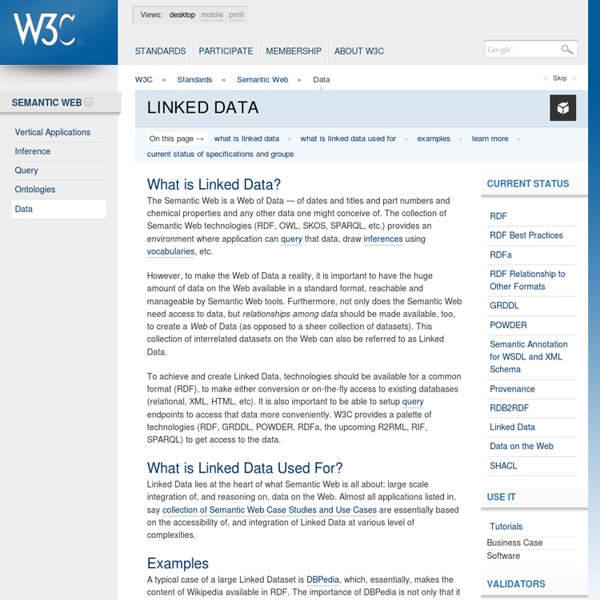 What is Linked Data? The Semantic Web is a Web of Data — of dates and titles and part numbers and chemical properties and any other data one might conceive of. The collection of Semantic Web technologies (RDF, OWL, SKOS, SPARQL, etc.) provides an environment where application can query that data, draw inferences using vocabularies, etc. However, to make the Web of Data a reality, it is important to have the huge amount of data on the Web available in a standard format, reachable and manageable by Semantic Web tools. Furthermore, not only does the Semantic Web need access to data, but relationships among data should be made available, too, to create a Web of Data (as opposed to a sheer collection of datasets). To achieve and create Linked Data, technologies should be available for a common format (RDF), to make either conversion or on-the-fly access to existing databases (relational, XML, HTML, etc). What is Linked Data Used For? Examples Learn More Current Status of Specifications Related:  teaching: Linked Data

Linked Data Basics for Techies - OpenOrg Intended Audience This is intended to be a crash course for a techie/programmer who needs to learn the basics ASAP. It is not intended as an introduction for managers or policy makers (I suggest looking at Tim Berners-Lee's TED talks if you want the executive summary). It's primarily aimed at people who're tasked with creating RDF and don't have time to faff around. It will also be useful to people who want to work with RDF data. Please Feedback-- especially if something doesn't make sense!!!! If you are new to RDF/Linked Data then you can help me! I put a fair bit of effort into writing this, but I am too familar with the field! If you are learning for the first time and something in this guide isn't explained very well, please drop me a line so I can improve it. cjg@ecs.soton.ac.uk Warning Some things in this guide are deliberately over-simplified. Alternatives If you don't like my way of explaining things, then there's other introductions out there; (suggest more!) Structure Merging URI vs URL a

Linked Data: Evolving the Web into a Global Data Space sameAs Linked Data Platform 1.0 5.1 Introduction This section is non-normative. Many HTTP applications and sites have organizing concepts that partition the overall space of resources into smaller containers. To which URLs can I POST to create new resources? This document defines the representation and behavior of containers that address these issues. This document includes a set of guidelines for creating new resources and adding them to the list of resources linked to a container. The following illustrates a very simple container with only three members and some information about the container (the fact that it is a container and a brief title): Example 1 # The following is the representation of # # @base < @prefix dcterms: < This example is very straightforward - there is the containment triple with subject of the container, predicate of ldp:contains and objects indicating the URIs of the contained resources. Example 2 Example 3 Example 4 Example 5

Getty Vocabularies as LOD The Getty vocabularies are constructed to allow their use in linked data. A project to publish AAT, TGN, ULAN, and CONA to the LOD (Linked Open Data) cloud is underway. The documents on this page contain news and presentations about releasing the Getty vocabularies as LOD. These materials are subject to frequent modification and addition. News and Status of the Project Ontology update: Note that the ontology has changed. Additional releases: Plans are in place to release the other vocabularies as LOD on the following dates: ULAN in January 2015 and the CONA demo in July 2015. Other formats: In addition to LOD, we plan to continue providing the data in relational tables and XML releases. Working with the community: We have established an open community and we welcome collaboration. For questions and comments about editorial content or general information regarding the Getty Vocabularies, please contact us at vocab@getty.edu What Is LOD?

Basic Semantic Concepts | Semantic Strategy Inc What is an Ontology? An ontology formally represents knowledge as a set of concepts within a domain, and the relationships among those concepts. The World Wide Web Consortium (W3C) uses the word vocabulary, but they can essentially mean the same thing: Vocabularies define the concepts and relationships (also referred to as “terms”) used to describe and represent an area of concern. Vocabularies are used to classify the terms that can be used in a particular application, characterize possible relationships, and define possible constraints on using those terms. The role of vocabularies on the Semantic Web are to help data integration when, for example, ambiguities may exist on the terms used in the different data sets, or when a bit of extra knowledge may lead to the discovery of new relationships. What is a Triple? A triple is a data entity composed of subject-predicate-object, like “Bob is a Person” or “Bob knows Fred”. Examples of triples: Ted Derek Alexandria has employee has supervisor Jimmy

RDF 1.1 N-Quads Abstract N-Quads is a line-based, plain text format for encoding an RDF dataset. Status of This Document This section describes the status of this document at the time of its publication. Other documents may supersede this document. A list of current W3C publications and the latest revision of this technical report can be found in the W3C technical reports index at This document is part of the RDF 1.1 document suit. This document was published by the RDF Working Group as a Recommendation. Please see the Working Group's implementation report. This document has been reviewed by W3C Members, by software developers, and by other W3C groups and interested parties, and is endorsed by the Director as a W3C Recommendation. This document was produced by a group operating under the 5 February 2004 W3C Patent Policy. Table of Contents 1. This document defines N-Quads, an easy to parse, line-based, concrete syntax for RDF Datasets [RDF11-CONCEPTS]. 2. 2.1 Simple Statements 2.2 IRIs

Data on the Web Best Practices Status of This Document This section describes the status of this document at the time of its publication. Other documents may supersede this document. A list of current W3C publications and the latest revision of this technical report can be found in the W3C technical reports index at This early version of the document shows its expected scope and future direction. This document was published by the Data on the Web Best Practices Working Group as an Editor's Draft. Publication as an Editor's Draft does not imply endorsement by the W3C Membership. This document was produced by a group operating under the 5 February 2004 W3C Patent Policy. This document is governed by the 1 August 2014 W3C Process Document. Introduction The best practices described below have been developed to encourage and enable the continued expansion of the Web as a medium for the exchange of data. In broad terms, data publishers aim to share data either openly or with controlled access. Context

Linked Data Platform Best Practices and Guidelines 2.1 Predicate URIs should be HTTP URLs URIs are used to uniquely identify resources and URLs are used to locate resources on the Web. That is to say that a URL is expected to resolve to an actual resource, which can be retrieved from the host. One of the fundamental ideas behind Linked Data is that the things referred to by HTTP URIs can actually be looked up ("dereferenced"). Of course, it is also a common practice to reuse properties from open vocabularies that are publicly available. 2.2 Use and include the predicate rdf:type to represent the concept of type in LDPRs It is often very useful to know the type (class) of an LDPR, though it is not essential to work with the interaction capabilities that LDP offers. This provides a way for clients to easily determine the type(s) of a resource without having to perform additional processing or make additional HTTP requests. Example 1: Representation of an LDPR with explicit declaration of rdf:type 2.3 Use relative URIs See also: