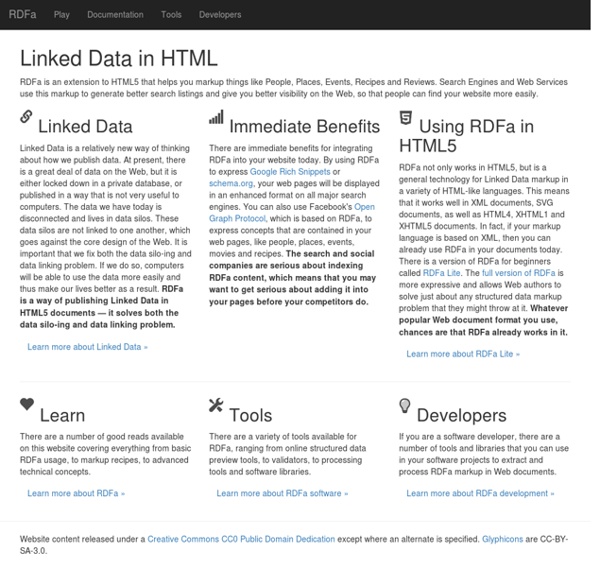 RDFa is an extension to HTML5 that helps you markup things like People, Places, Events, Recipes and Reviews. Search Engines and Web Services use this markup to generate better search listings and give you better visibility on the Web, so that people can find your website more easily. Linked Data Linked Data is a relatively new way of thinking about how we publish data. At present, there is a great deal of data on the Web, but it is either locked down in a private database, or published in a way that is not very useful to computers. The data we have today is disconnected and lives in data silos.

Standards OASIS Cyber Threat Intelligence (CTI) TC Cite as: [STIX-v1.2.1-Overview]STIX(TM) Version 1.2.1. RDF: The Basics A new article by Ric Roberts offers an introductory-level explanation of RDF for newcomers to the Semantic Technology space. Roberts begins, “Linked Data is based around describing real world things using RDF. A lot of articles about Linked Data assume you already know what RDF is all about: if you are coming to it for the first time, this article explains the basics. RDF stands for Resource Description Framework. It’s a W3C standard for modeling information.” He continues, “RDF allows you to define statements about things (or resources), in the form of subject-predicate-object expressions (known as RDF-triples due to the 3 constituent parts).

Getting Started · React Native This page will help you install and build your first React Native app. If you already have React Native installed, you can skip ahead to the Tutorial. If you are coming from a web background, the easiest way to get started with React Native is with Expo tools because they allow you to start a project without installing and configuring Xcode or Android Studio. Expo CLI sets up a development environment on your local machine and you can begin writing a React Native app within minutes. How RDF Databases Differ from Other NoSQL Solutions - The Datagraph Blog This started out as an answer at Semantic Overflow on how RDF database systems differ from other currently available NoSQL solutions. I've here expanded the answer somewhat and added some general-audience context. RDF database systems are the only standardized NoSQL solutions available at the moment, being built on a simple, uniform data model and a powerful, declarative query language.

Basic Data Types and Interfaces – SVG 1.1 (Second Edition) Contents 4.1 Syntax The EBNF grammar is as used in the XML specification, with the addition of ~, a case-insensitive literal: characters in the ASCII range (only) are declared to be case-insensitive. For example, ~"Hello" will match (H|h)(e|e)(l|L)(l|L)(o|O). This makes the productions much easier to read. 4.2 Basic data types

RDF Web Applications Working Group Current and Upcoming Events Teleconferences: The first Thursday of each month at 10am US Eastern time. An agenda is sent to rdfa-wg 24 hours in advance; minutes follow within a day or two. Will be monitoring comments on any specification or test cases W3C Standards and Notes HTML+RDFa 1.1 (REC) Fetch API - Web APIs The Fetch API provides an interface for fetching resources (including across the network). It will seem familiar to anyone who has used XMLHttpRequest, but the new API provides a more powerful and flexible feature set. Concepts and usage Fetch provides a generic definition of Request and Response objects (and other things involved with network requests). This will allow them to be used wherever they are needed in the future, whether it’s for service workers, Cache API and other similar things that handle or modify requests and responses, or any kind of use case that might require you to generate your own responses programmatically.

Introduction to: RDF vs XML There has always been a misconception between the relationship of RDF and XML. The main difference: XML is a syntax while RDF is a data model. RDF has several syntaxes (Turtle, N3, etc) and XML is one of those (known as RDF/XML). Actually, RDF/XML is the only W3C standard syntax for RDF (Currently, there is Last Call on Turtle, a new W3C standard syntax for RDF). Therefore, comparing XML and RDF is like comparing apples with oranges.

Using Fetch - Web APIs The Fetch API provides a JavaScript interface for accessing and manipulating parts of the HTTP pipeline, such as requests and responses. It also provides a global fetch() method that provides an easy, logical way to fetch resources asynchronously across the network. This kind of functionality was previously achieved using XMLHttpRequest. Fetch provides a better alternative that can be easily used by other technologies such as Service Workers. Fetch also provides a single logical place to define other HTTP-related concepts such as CORS and extensions to HTTP.

Request - Web APIs The Request interface of the Fetch API represents a resource request. You can create a new Request object using the Request() constructor, but you are more likely to encounter a Request object being returned as the result of another API operation, such as a service worker FetchEvent.request. Constructor RDF triple stores — an overview There's a huge range of triple stores out there, and it's not trivial to find the one most suited for your exact needs. I reviewed all those I could find earlier this year for a project, and here is the result. I've evaluated the stores against the requirements that mattered for that particular project. I haven't summarized the scores, as everyone's weights for these requirements will be different. By a triple store I mean a tool that has some form of persistent storage of RDF data and lets you run SPARQL queries against that data.

Fetching data from the server - Learn web development Another very common task in modern websites and applications is retrieving individual data items from the server to update sections of a webpage without having to load an entire new page. This seemingly small detail has had a huge impact on the performance and behavior of sites, so in this article, we'll explain the concept and look at technologies that make it possible, such as XMLHttpRequest and the Fetch API. What is the problem here? Originally page loading on the web was simple — you'd send a request for a website to a server, and as long as nothing went wrong, the assets that made the web page would be downloaded and displayed on your computer.

RDF and Mind Maps Kerstin Forsberg has written an article about mind maps and how the concept of mapping the mind calls for RDF triples and formal models. She writes, “When I see these mind maps I see graphs just begging for RDF triples (subject, predicate, object)… An interesting exercise would be to have the Parkinson’s disease example completed in the concept mapping tool (CMAP) the whole way down to SDTM. And export the mind maps using as RDF triples.”

HTTP status codes - ascii-code.com Below is a list of response codes for HTTP returned by servers on the Internet. Most of these status codes are specified by RFC 2616, while some are unstandardized status codes which are also used on the web. The codes help identify the cause of the problem when a web page or other resource does not load properly.