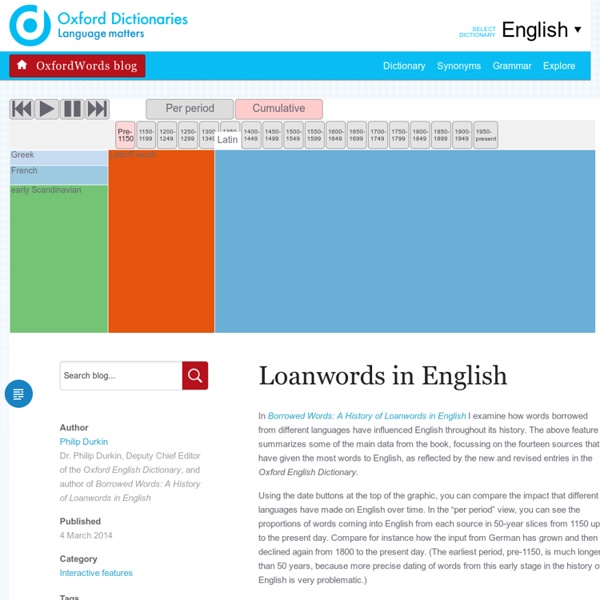 In Borrowed Words: A History of Loanwords in English I examine how words borrowed from different languages have influenced English throughout its history. The above feature summarizes some of the main data from the book, focussing on the fourteen sources that have given the most words to English, as reflected by the new and revised entries in the Oxford English Dictionary. Using the date buttons at the top of the graphic, you can compare the impact that different languages have made on English over time. In the “per period” view, you can see the proportions of words coming into English from each source in 50-year slices from 1150 up to the present day. Compare for instance how the input from German has grown and then declined again from 1800 to the present day. If you switch to the “cumulative” view, then you can see how the total number of loanwords from each language has built up over time. A truly global sweep The elephant in the room Related:  Change: lexical-semantic

From Skedaddle to Selfie: Words of the Generations by Allan Metcalf – review Previously, Allan Metcalf, a professor of English at MacMurray College in Jacksonville, Illinois, has written a whole book devoted to “America’s greatest word”: OK (or “K”, as my 16-year-old daughter likes to “abbrev” it, presumably to save energy in her texting thumb). This new slimmer volume goes at the etymology of American slang from a different direction; it sets out, somewhat haphazardly, to define the character of generations from the words they coin. OK itself was by this reckoning a “product of the transcendental generation”, though you can’t quite imagine Thoreau having much use for it as he contemplated Walden Pond. It was invented in 1839 by Charles Gordon Greene, editor of the Boston Morning Post, in a story full of other “humorous contractions” such as RTBS (remains to be seen). Correctness, you are reminded, is the enemy of slang, trying to prevent underage neologisms slipping into the speakeasy lexicon and lowering the tone.

Biblical names: meaning and etymology of Hebrew, Greek and Latin Bible names Abarim Publications' world famous Biblical Name Vault ← Biblical names: meaning and etymology Use the menu to the left to peruse our vast and ever growing collection of articles on Hebrew and Greek names that occur in the Bible. For each Biblical name you'll find: A short biography of the Biblical character who bore that name.An in-depth look at the verbal root(s) and possible etymologies of the name in question.For each name some possible meanings: the suggestions of a select few scholars and our own suggestions in case we disagree with the consensus, which happens on occasion. Biblical baby names: boy or girl? In Hebrew the differences between masculine and feminine names are not very firmly established, and that is possibly because people were often named not after their own characteristics but rather in commemoration of some quality of God (or some other deity), or even animals or certain events in Israel's history. How Biblical names sounded in Biblical times As noted by Joel M.

Creating New Words For New Needs I'm continually astounded at the ability of the English language to furnish new words for new needs. When innovative technologies, trends or ideas expose gaps in the front line of our vocabulary, we quickly send in fresh soldiers — new words! — to plug the holes. People are taking snapshots of themselves with their cellphones? But what astounds me even more is that English has failed to generate new words to describe other significant phenomena or simply to fill basic linguistic functions. Why, for instance, don't we have a general term to describe an adult in a loving relationship with someone else? In all fairness, you can't say we haven't tried to come up with a better term. Similarly, people have been trying for centuries to devise a gender-neutral, third-person singular pronoun to replace the clunky "he or she/him or her" construction. Guess what? And then there's the question of what to call the past decade.

Crying with laughter: how we learned how to speak emoji | Technology The Oxford dictionary has announced its word of the year. It’s spelled ... Actually, it isn’t spelled at all, because it contains no letters, just a pair of symmetrical eyebrows, eyes, big gloopy tears, and a broad monotooth grin. That’s right, the word of the year is the “face with tears of joy” emoji. But that’s not a word at all! “The fact that English alone is proving insufficient to meet the needs of 21st-century digital communication is a huge shift,” says Grathwohl. Three or four years ago, Oxford Dictionaries’ announcement would have been subversive, but now it seems a reasonable reflection of the way that language is shifting. In fact, emojis have their own version of the Oxford dictionary. Anyone can suggest an emoji, says Vyvyan Evans, a professor in linguistics at Bangor University, who has spent the past year studying emojis. But how far do emojis function as a language in their own right? It was in Japan, in the late 1990s, that emoji were born. A guide by Sara Ilyas

Encyclopedia of Philosophy What will the English language be like in 100 years? Simon Horobin, University of Oxford One way of predicting the future is to look back at the past. The global role English plays today as a lingua franca – used as a means of communication by speakers of different languages – has parallels in the Latin of pre-modern Europe. Having been spread by the success of the Roman Empire, Classical Latin was kept alive as a standard written medium throughout Europe long after the fall of Rome. Similar developments may be traced today in the use of English around the globe, especially in countries where it functions as a second language. Despite the Singaporean government's attempts to promote the use of Standard British English through the Speak Good English Movement, the mixed language known as "Singlish" remains the variety spoken on the street and in the home. Spanglish, a mixture of English and Spanish, is the native tongue of millions of speakers in the United States, suggesting that this variety is emerging as a language in its own right.

Acheta Acheta &mdash; Overview learn more about names for this taxon Add to a collection Media © Valter Jacinto Source: Flickr: EOL Images See all media IUCN threat status: Not evaluated Brief summary No one has contributed a brief summary to this page yet. Explore what EOL knows about Acheta. Add a brief summary to this page Present in 9 collections See all 9 collections in which this page appears. Belongs to 0 communities This taxon hasn't been featured in any communities yet. Learn more about Communities EOL has no trait data No one has contributed data records for Acheta yet. Found in 4 classifications See all 4 approved classifications in which this taxon appears. Genus recognized by Integrated Taxonomic Information System (ITIS): Reviewed by 0 curators Learn how to curate Our curators haven't taken any action on this page yet. Latest updates See all 5 updates for this page. Add a new comment Disclaimer EOL content is automatically assembled from many different content providers. Encyclopedia of Life English About EOL

Do you really know what that word means? Caitlin Dewey discovers 24 words that mean totally different things now than they did pre-internet. Technological change, as we know very well, tends to provoke linguistic and cultural change, too. It's the reason why, several times a year, dictionaries trumpet the addition of new and typically very trendy words. But more interesting than the new words, are the old words that have been given new meanings: words such as "cloud" and "tablet" and "catfish", with very long pre-internet histories. Anyway, this is all a very long way of saying that dictionary.com's 20th birthday is more interesting than most. On one hand, the list shows how technology has shaped language over time. But it also shows how language has shaped technology - or, at least, our technological understandings and paradigms. Bump Then: To encounter something that is an obstacle or hindrance.Now: To move an online post or thread to the top of the reverse chronological list by adding a new comment or post to the thread. Block