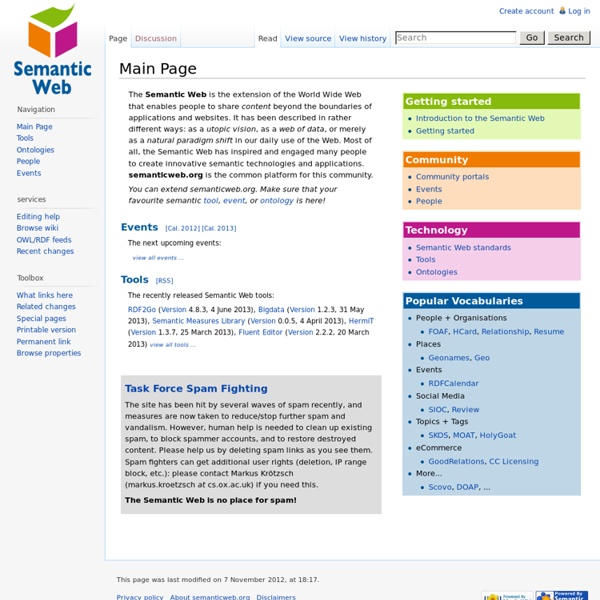 The Semantic Web is the extension of the World Wide Web that enables people to share content beyond the boundaries of applications and websites. It has been described in rather different ways: as a utopic vision, as a web of data, or merely as a natural paradigm shift in our daily use of the Web. Most of all, the Semantic Web has inspired and engaged many people to create innovative semantic technologies and applications. semanticweb.org is the common platform for this community. You can extend semanticweb.org. Make sure that your favourite semantic tool, event, or ontology is here! Task Force Spam Fighting

RDF Primer The Resource Description Framework (RDF) is a language for representing information about resources in the World Wide Web. This Primer is designed to provide the reader with the basic knowledge required to effectively use RDF. It introduces the basic concepts of RDF and describes its XML syntax. Labs/Ubiquity Back to Labs. Ubiquity was a Mozilla Labs experiment that was in development from 2008 to 2009. Its purpose was to explore whether a radically different type of interface to the Web — a task-centric, natural-language-based command line — could help us get common Web tasks done faster.

Molecular Expressions Wallpaper for Macintosh The Macintosh Wallpaper Collection By popular demand, we have converted a majority of the photomicrographs in our collection into pict (*.pict) files for Macintosh. They are made by dropping the color and manipulating the images so that they will tile seamlessly to support nice backgrounds for your Macintosh computer. Biochemicals -- This collection contains wallpaper made from images in our large library of biochemical photomicrographs. These include amino acids, cholesterol, DNA, endorphins, fatty acids, hormones, neurotransmitters, phytochemicals, prostaglandins, proteins, sugars, and vitamins. Food and Beverages -- This unusual collection features our beers of the World, cocktails, and wine collection in addition to soft drinks, ice cream, and vegetables.

RDF/OWL Representation of WordNet Abstract This document presents a standard conversion of Princeton WordNet to RDF/OWL. It describes how it was converted and gives examples of how it may be queried for use in Semantic Web applications. Status of this Document SKOS Simple Knowledge Organization System - home page SKOS is an area of work developing specifications and standards to support the use of knowledge organization systems (KOS) such as thesauri, classification schemes, subject heading lists and taxonomies within the framework of the Semantic Web ... [read more] Alignment between SKOS and new ISO 25964 thesaurus standard (2012-12-13) ISO 25964-1, published in 2011, replaced the previous thesaurus standards ISO 2788 and ISO 5964 (both now withdrawn). Members of the Working Group responsible for ISO 25964 have gone on to consider the implications for SKOS users. They have developed a set of linkages between the elements of the ISO 25964 data model and the ones from SKOS, SKOS-XL, and MADS/RDF.

Code of Conduct Ubuntu is about showing humanity to one another: the word itself captures the spirit of being human. We want a productive, happy and agile community that can welcome new ideas in a complex field, improve every process every year, and foster collaboration between groups with very different needs, interests and skills. We gain strength from diversity, and actively seek participation from those who enhance it. This code of conduct exists to ensure that diverse groups collaborate to mutual advantage and enjoyment. We will challenge prejudice that could jeopardise the participation of any person in the project. SemanticWebTools - W3C Wiki REDIRECT New SemanticWiki Tools Page As of 12:50, 14 January 2010, this page is no longer maintained and should not be changed. The content has been transferred to

OWL Web Ontology Language Guide W3C Recommendation 10 February 2004 New Version Available: OWL 2 (Document Status Update, 12 November 2009) The OWL Working Group has produced a W3C Recommendation for a new version of OWL which adds features to this 2004 version, while remaining compatible. Tools This page gives an overview of software tools related to the Semantic Web or to semantic technologies in general. Due to the large amount of tools being created in the community, this site is always somewhat outdated. Contributions and updates are welcomed. See also: Tool Chains

About DBpedia is a crowd-sourced community effort to extract structured information from Wikipedia and make this information available on the Web. DBpedia allows you to ask sophisticated queries against Wikipedia, and to link the different data sets on the Web to Wikipedia data. We hope that this work will make it easier for the huge amount of information in Wikipedia to be used in some new interesting ways. Furthermore, it might inspire new mechanisms for navigating, linking, and improving the encyclopedia itself.

SweoIG/TaskForces/CommunityProjects/LinkingOpenData - W3C Wiki News 2014-12-03: The 8th edition of the Linked Data on the Web workshop will take place at WWW2015 in Florence, Italy. The paper submission deadline for the workshop is 15 March, 2015. 2014-09-10: An updated version of the LOD Cloud diagram has been published.