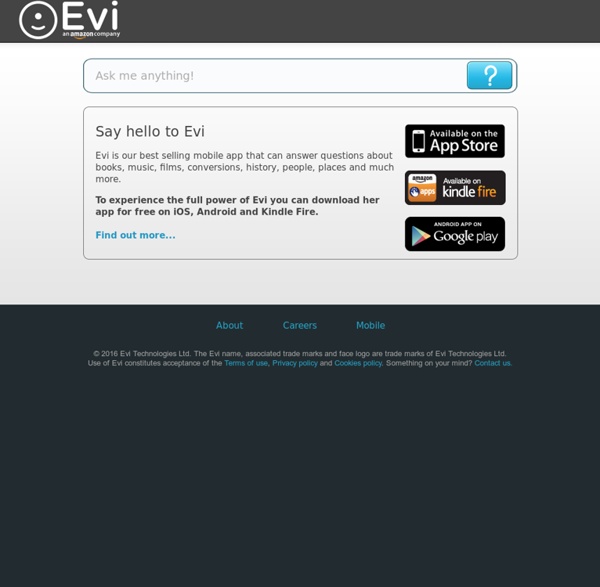 99 Resources to Research & Mine the Invisible Web College researchers often need more than Google and Wikipedia to get the job done. To find what you're looking for, it may be necessary to tap into the invisible web, the sites that don't get indexed by broad search engines. The following resources were designed to help you do just that, offering specialized search engines, directories, and more places to find the complex and obscure. Search Engines Whether you're looking for specific science research or business data, these search engines will point you in the right direction.

How to Get Free Stuff To make all of these Instructables, download this collection of How To’s as an ebook. Download » It turns out that you can get and do a lot of things in this world for free. Swirrl: Newly Launched Semantic Web Wiki Swirrl is a wiki-like application that was built using Semantic Web technologies and launched as a beta last week. We heard about it in the comments to our post about the lack of commercial RDF applications on the Web. As with most Semantic Web apps, it's a little difficult to describe what Swirrl is. On its homepage Swirrl is said to be "like a wiki, but better." Please Login or Join to Continue Please Login or Join to Continue Use a Portable ID Login

5 Visions of the Future From Experts (Who Should Be Fired) I'm a sucker for technology. I love watching videos about gadgets that are coming up in the near future, even if I know I can't afford them or really even use them. But every once in a while, I'll catch one that makes me question whether the makers really thought it through. I mean, you can tell they put in thousands of hours of thought into the actual technology, but when they portray how it's meant to be used, you wonder if they've ever actually spoken to another human being. #5. In the Future, Every Surface Is a Touchscreen! Mumble Mumble is voice chat software that can be used by any type of group but is tailored for gamers who enjoy chatting while gaming. It has an ingame overlay for DirectX9 and OpenGL based games and shows clearly who is speaking even when using full screen applications. This is a feature that most chatting software lacks and is what gamers have been asking for. Gamers have had concerns about delays with other chat software. This presents a major problem when a gamer is asking advice and needs a quick response. Mumble has a much shorter delay and better implementation of Speex than most other software.

Twine: The First Mainstream Semantic Web App? On Friday Radar Networks is announcing a new Semantic Web application called Twine. Founder Nova Spivack showed me a demo today of the new app, which he described as a "knowledge networking" application. It has aspects of social networking, wikis, blogging, knowledge management systems - but its defining feature is that it's built with Semantic Web technologies. Spivack told me that Twine aims to bring a usable and scalable interface to the long-promised dream of the Semantic Web. Spivack went as far as to claim that Twine will be "the first mainstream Semantic Web application" - and it's certainly fair to say that we've heard lots of theory about the Semantic Web ever since Tim Berners-Lee defined it, but as yet there have been very few large scale success stories (if any).

Facebook knows too much, ACLU says in warning of quizzes Privacy advocates have long warned that users of Facebook and other social networks who seek amusement from quizzes like "What Simpsons Character Are You?" might be mortified by the way creators of such applications can access and potentially "scrape" personal information -- not just about the quiz-takers, but their friends as well. Now, engaging in some online jujitsu, the ACLU of Northern California is employing a cautionary Facebook quiz of its own to illustrate how quizzes that may seem "perfectly harmless" can release an array of data to the wider world -- including users' "religion, sexual orientation, political affiliation, photos, events, notes, wall posts, and groups." The app, titled "What Do Facebook Quizzes Know About You?" delivers its answer by opening a window that scrolls biographical data, attributed comments and photos. More than 8,000 participants have taken the ACLU's quiz since it was quietly released a few days ago, the ACLU said Wednesday.

Twine (website) Twine is an online, social web service for information storage, authoring and discovery. Created by Radar Networks, the service was announced on October 19, 2007 and made open to the public on October 21, 2008.[1] On March 11, 2010, Radar Networks was acquired by Evri Inc. along with Twine.com[2] and since May 14, twine.com re-directs to evri.com. Twine combines features of forums, wikis, online databases and newsgroups[3] and employs intelligent software to automatically mine and store data relationships[4] expressed using RDF statements. Twine is a social network and its users can add contacts, send private messages and share information.

Six questions that rejected Venture Capital seekers could not answer Raising funding for an early-stage venture is always difficult. There is no bottled recipe for success, but even if you have a great concept that is scalable combined with a passionate team that can execute the growth strategy, you still need to communicate this in a multifaceted investor’s pitch. Most entrepreneurs can give a fair account of the top line business strategic growth path, dive into the complexities of the product or service offering, put together a good industry analysis, name a handful of possible clients and present enticing year three to five financial projections, but this will not necessarily get you to the due diligence phase. Unless all of this is based on solid research, the application for venture capital (VC) funding will most likely get rejected.

Motorola Mobility Acquired by Google for $12.5 Billion Google announced Monday morning that it will acquire Motorola Mobility for $12.5 billion. Motorola is one of 39 manufacturers of handsets that use Google's Android operating system. Buying a hardware company is an unusual move for Google. The acquisition, Google said in a statement, "will enable Google to supercharge the Android ecosystem." SEE ALSO: Nokia & RIM Shares Jump Following Google’s Motorola Mobility Acquisition

What we do manage Are you spending a lot of time on poor performers?. How do you ensure you’re getting maximum results from your top performers? Can you fine-tune the way you deal with each of your employees and manage them better? learn more