One Stop Resource for Google Docs 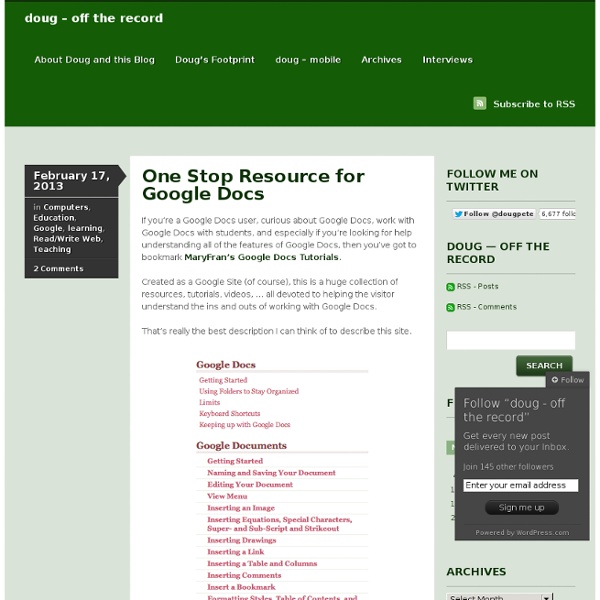 If you’re a Google Docs user, curious about Google Docs, work with Google Docs with students, and especially if you’re looking for help understanding all of the features of Google Docs, then you’ve got to bookmark MaryFran’s Google Docs Tutorials. Created as a Google Site (of course), this is a huge collection of resources, tutorials, videos, … all devoted to helping the visitor understand the ins and outs of working with Google Docs. That’s really the best description I can think of to describe this site. Navigation and use is as simple and powerful as Google Docs itself. Just select a topic of interest from the left side navigation menu and read on. Screen captures are included along with complete descriptions of just what activity is being discussed. Google Docs users – make sure that you bookmark this resource. Powered by Qumana Like this: Like Loading... Related OTR Links 12/16/2011 Main Page - Math Lesson and Unit Plans page divided by grade level and strand. In "Links" OTR Links 04/09/2012

The 35 Best Google Search Tips and Tricks Google is kind of a big deal, to say the least. The tech giant has blossomed over the course of the past decade, quickly becoming part of the global lexicon, and establishing itself as an official verb in the dictionary. Although the company wears many hats, its most valuable asset has always been its phenomenal search engine. Related: Our guide to using Google Drive Unfortunately, Google isn’t one to automatically recognize punctuation and grammar within search queries.

10 Great Tools to Integrate with your Google Docs Since Google officially changed Google Docs name to Google Drive and a number of updates have been introduced to improve its overall performance. One very recent update is an increase of cloud storage capacity to 15GB usable across Gmail, Drive, and Google Plus. It is quite obvious that Google is trying to outsmart its immediate competitor Dropbox and I think Google is successful in its strategy so far. To make Google Drive stand out from the crowd, Google opened it to apps developers and allowed users to select from a wide variety of web apps to integrate into their Google Drive accounts. Convert Your PDF’s to Google Docs This Google Docs tip tells you how to convert a photo or PDF into a Google Doc. Earlier I blogged on annotating PDF’s being a bad lesson plan. I had suggested that at the very least to put the information into a Google Doc so students can collaborate around it and insert comments. From Google Drive, right click on the image file or PDF file. Choose “Open with” and choose “Google Docs.” This will make a copy of the image or PDF into a new Google Document.

You can now run Android apps on a Mac or PC with Google Chrome Google’s convergence of Chrome and Android is taking a big step forward this week. After launching a limited App Runtime for Chrome (ARC) back in September, Google is expanding its beta project to allow Android apps to run on Windows, OS X, and Linux. It’s an early experiment designed primarily for developers, but anyone can now download an APK of an existing Android app and launch it on a Windows / Linux PC, Mac, or Chromebook. You simply need to download the ARC Welder app and obtain APKs from Google’s Play Store. Three Helpful Google Docs Updates Released This Week This week the Google Docs team released three updates. All three updates have potential to be useful in school settings. First, Google Docs in your web browser and in the Android app now has a document outlining tool. The outline tool will recognize headers within your documents and create an outline based upon those headers and sub-headers.

How to run Android apps on any laptop or desktop Android has a large, vibrant ecosystem of applications. From Heartstone to Plex to Twitter, Google Play is home to over 1.5 million mobile apps, according to AppBrain. Wouldn't it be great to run all these apps on your computer, too? How I moved my websites to Dropbox and GitHub A few months ago I cancelled my hosting and server accounts and moved all my websites to the cloud. I tried it as an experiment; never for a second I thought it would work this well. I did the switch out of impulse: I was pissed. I was pissed at the hosting companies charging so much, having such crappy support, and much downtime. I’m very glad I switched.