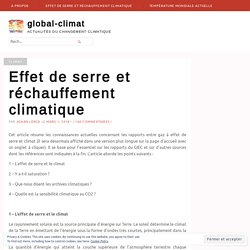 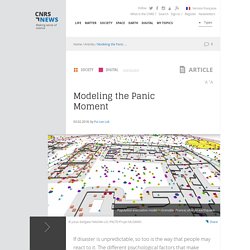 The different psychological factors that make individuals tick has inspired computer scientists to model how people really behave in a crisis—in the hope of boosting our readiness for future calamities. “Should I stay or should I go?” This is the question that people ask—or should ask—when they find themselves in striking distance of a disaster. Yet as buildings rocked by an earthquake collapse around them, bushfire flames approach, or floodwaters head their way, what a significant number of people will actually do is nothing—regardless of warnings and evacuation orders. “Human behavior in crisis situations is rarely purely rational,” explains computer scientist Carole Adam of the LIG.1 in Grenoble, France.

Limits to Growth (1972) Understanding collapse - Stockholm Resilience Centre. Global Rich List. Effet de serre et réchauffement climatique. Psychological Warfare. How poverty changes your mind-set. The proportion of the global population living on less than $1.90 per person per day has fallen—from 18 percent in 2008 to 11 percent in 2013, according to the World Bank. 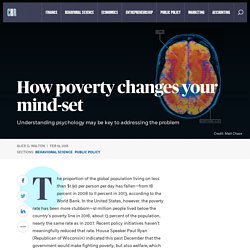 In the United States, however, the poverty rate has been more stubborn—41 million people lived below the country’s poverty line in 2016, about 13 percent of the population, nearly the same rate as in 2007. Recent policy initiatives haven’t meaningfully reduced that rate. House Speaker Paul Ryan (Republican of Wisconsin) indicated this past December that the government would make fighting poverty, but also welfare, which many Republicans believe is a failed policy, a priority in 2018. The Top Importers and Exporters of the World's 18 Most Traded Goods. View the high resolution version of today’s graphic by clicking here. 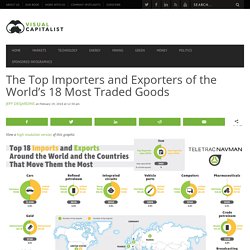 Every day, massive quantities of goods get traded on the global market. These goods can be entirely customized and unique, but more often they are things like commodities or bulk goods that get moved around on huge container ships from country to country. The terrifying phenomenon that is pushing species towards extinction. There was almost something biblical about the scene of devastation that lay before Richard Kock as he stood in the wilderness of the Kazakhstan steppe. 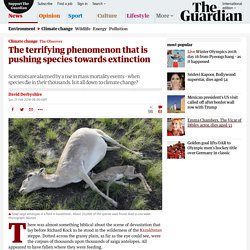 Dotted across the grassy plain, as far as the eye could see, were the corpses of thousands upon thousands of saiga antelopes. Postgrowth EC was LIVE. Europe's Dirty Little Secret: Moroccan Slaves and a 'Sea of Plastic' - EcoWatch. It seemed like a wonderful idea—driving the Spanish coast from Barcelona all the way down to the Straits of Gibraltar. 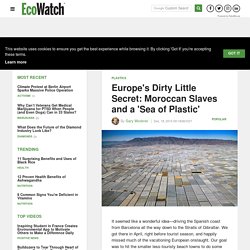 We got there in April, right before tourist season, and happily missed much of the vacationing European onslaught. Our goal was to hit the smaller less-touristy beach towns to do some diving, paddleboarding and beachcombing along the Mediterranean Coast. South of Barcelona, we stayed in L'Ampolla and enjoyed near-deserted beaches, hotels and restaurants. Why Silicon Valley billionaires are prepping for the apocalypse in New Zealand. Deconstructing climate misinformation to identify reasoning errors. Misinformation, defined as information initially presented as true that is later found to be false (Lewandowsky et al 2012), is a societal issue of growing concern. 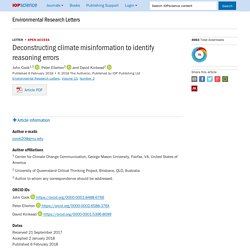 The World Economic Forum listed online misinformation as one of the top ten global trends threatening the world (WEF 2014). Oxford Dictionary named 'post-truth' the 2016 word of the year (Flood 2016) while Collins Dictionary named 'fake news' the 2017 word of the year (Flood 2017) in recognition of the prevalence and impact of misinformation. The issue of climate change has been particularly impacted by misinformation. There is an overwhelming scientific consensus that humans are causing global warming (Cook et al 2016), with a number of studies converging on 97% agreement among publishing climate scientists or relevant climate papers (Doran and Zimmerman 2009, Anderegg et al 2010, Cook et al 2013, Carlton et al 2015).

Psmag. Situational Assessment 2018: the Calm Before the Storm. This series began in 2015 with an effort to do a broad assessment of the various risks present in the total global environment. 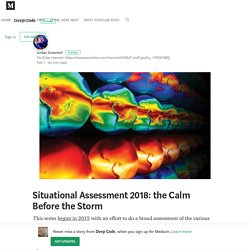 Last year (almost precisely 365 days ago), I focused specifically on the political situation in the United States and outlined what I considered to be the essential fronts of a new and important kind of war: A Map Shows What Happens When Our World Gets Four Degrees Warmer: The Colorado River Dries Up, Antarctica Urbanizes, Polynesia Vanishes. Humanity faces few larger questions than what, exactly, to do about climate change — and, in a sense larger still, what climate change even means. 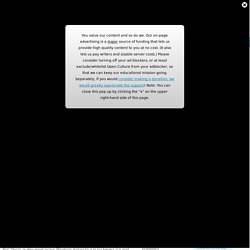 We've all heard a variety of different future scenarios laid out, each of them based on different data. But data can only make so much of an impact unless translated into a form with which the imagination can readily engage: a visual form, for instance, and few visual forms come more tried and true than the map. Five-year forecast indicates further warming - Met Office. A new forecast published by scientists at the Met Office indicates the annual global average temperature is likely to exceed 1 °C and could reach 1.5 °C above pre-industrial levels during the next five years (2018-2022). 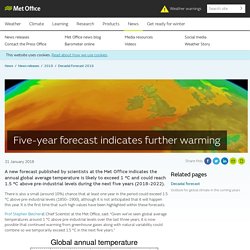 There is also a small (around 10%) chance that at least one year in the period could exceed 1.5 °C above pre-industrial levels (1850–1900), although it is not anticipated that it will happen this year. It is the first time that such high values have been highlighted within these forecasts. Prof Stephen Belcher, Chief Scientist at the Met Office, said: “Given we’ve seen global average temperatures around 1 °C above pre-industrial levels over the last three years, it is now possible that continued warming from greenhouse gases along with natural variability could combine so we temporarily exceed 1.5 °C in the next five years.”

Delusions of grandeur in building a low-carbon future. Traditional macroeconomic models are an unstable foundation for decision-making when planning for a low-carbon future. Credit: K. Cantner, AGI. By Carey W. King Since April 22, 2016, leaders of 195 nations have signed the Paris climate accord, which starts the process of voluntarily committing to greenhouse gas emissions limits for each country. The primary goal of the Paris Agreement is to spur the enactment of measures that will limit greenhouse gas emissions enough to prevent the average global temperature from rising more than 2 degrees Celsius above preindustrial levels. Materia Rinnovabile numero 08 / gennaio-febbraio - Dalla Grande accelerazione al Modello iceberg.

Shale gas is one of least sustainable options for producing electricity, according to new research from The University of Manchester. Taking into account a range of sustainability aspects and assuming that they are all equally important, the research found that shale gas overall ranks seventh out of nine electricity options. The study also found that: Shale gas ranks between the fourth and eighth relative to other electricity options To become the most sustainable option, large improvements would be needed This includes a 329-fold reduction in environmental impacts and a 16-fold increase in employment An electricity mix with less rather than more shale gas is more sustainable The major study, which is the first of its kind, considered environmental, economic and social sustainability of shale gas in the UK and compared it to other electricity generating options.

These were coal, nuclear, natural gas, liquefied natural gas (LNG), solar photovoltaics (PV), wind, hydro and biomass. Dude, you broke the future! Petrolio: la vendetta dei pensionati. Will the World Economy Continue to “Roll Along” in 2018? Once upon a time, we worried about oil and other energy. IEA WEO 2017, ovvero le previsioni del tacchino - Decrescita Felice Social Network. Sustainability. Ever since the writing of Thomas Malthus in the early 1800s, and especially since Paul Ehrlich’s publication of “The Population Bomb” in 1968, there has been a lot of learned skull-scratching over what the sustainable human population of Planet Earth might “really” be over the long haul.

Bound by nature - Cultural evolution has not freed hunter-gatherers from environmental forcing. The Collapse of Global Civilization Has Begun – David B Lauterwasser. The Oil Crash: Predicciones para 2018. Quanti abitanti possono vivere sulla Terra? An Incomplete Timeline of What We Tried. The countries most likely to survive climate change in one infographic. The Air Quality-Life Index™ (AQLI) - EPIC Pollution Index. Versus-penser - Radio - Play RTS. What Will It Really Take to Avoid Collapse? Scientists discover unexpected side effect to cleaning up urban air.

Resource Limitations. What permaculture isn’t — and is. 31 Chinese Cities With Economies as Big as Countries. Climate Science Special Report. Earth Overshoot Day: We used a year's worth of resources in seven months. Theconversation.