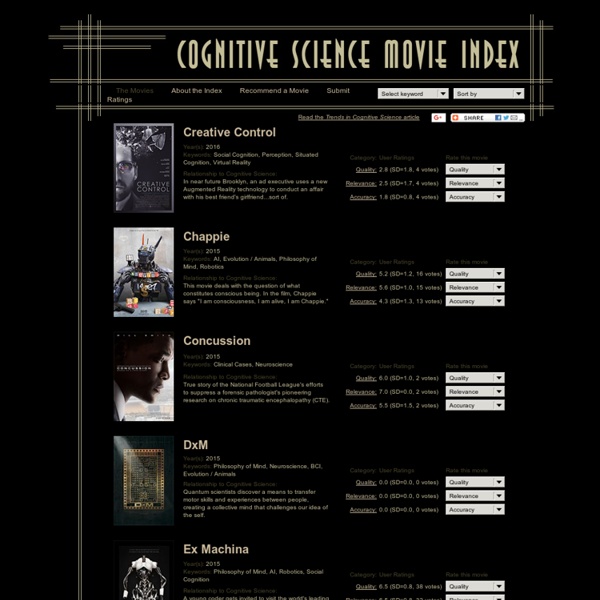 25 Spectacular Movies You (Probably) Haven't Seen Pt. 3 Mr. Nobody Who would you have been when, at crucial moments in your life, you chose to walk a different path? That thought experiment is explored brilliantly by this amazing science-fiction movie as we follow Nemo(s) for 118 years. Set in the past, the now and in the future, we follow different branches of his life through time, covering the topics of technology, love, human fragility and how decisions shape who we will end up being. Spectacular.

INTP Personal Growth What does Success mean to an INTP? People with the INTP personality type are global thinkers. They see everything as one giant Entity that is connected, and seek knowledge about that Entity. They constantly seek the Truth, and have ultimate respect for the Truth. It is not easy for the INTP to reach a conclusion about the Truth. Global horror takes a new "Road" - Horror Is there any country on earth — at least any country with its own cinema tradition — that doesn’t produce its own homegrown horror films, spiced up with a little local gruesomeness? Every time I write about horror, I get at least a couple of letters from people who see the cruelty, bloodlust, misogyny and so forth found in many such movies as a symptom of contemporary culture’s descent into depravity and brutality. On one hand, I always want to leave room for divergent tastes and opinions, but on the other — that’s just not true.

Teste de Personalidade As an INTP, your primary mode of living is focused internally, where you deal with things rationally and logically. Your secondary mode is external, where you take things in primarily via your intuition. INTPs live in the world of theoretical possibilities. They see everything in terms of how it could be improved, or what it could be turned into. Pick of the week: Childhood adventure from a Japanese master - Our Picks “I Wish” is an old-fashioned kind of movie about a subject that might sound, at first, both worn-out and a little retrograde: the dislocating and disorienting effects of a family breakup. It’s also a movie whose principal actors and characters are children, that tries to view the world from a child’s point of view — and that’s an enterprise so perilous, so prone to easy gags, cheap tears and nauseating sentimentality, that hardly anyone ever gets it right. But “I Wish” is a wonderful adventure film that’s no less thrilling for its modest scale, and a film whose emotional power and intelligence sneak up on you. Thoroughly accessible and rewarding, it might finally mark the mainstream breakthrough (relatively speaking) of Hirokazu Kore-eda, one of the finest living Japanese directors. I should add that “I Wish” is that rarest of fauna in the international art-house market, a genuine family movie that will charm both adults and children, albeit for somewhat different reasons.

300+ Mind Expanding Documentaries I watch a lot of documentaries. I think they are incredible tools for learning and increasing our awareness of important issues. The power of an interesting documentary is that it can open our minds to new possibilities and deepen our understanding of the world. On this list of mind expanding documentaries you will find different viewpoints, controversial opinions and even contradictory ideas. Critical thinking is recommended. I’m not a big fan of conspiracy documentaries but I do like films that challenge consensus reality and provoke us to question the everyday ideas, opinions and practices we usually take for granted. What makes ’Borgen’ and ’The Killing’ special? The most popular female police officer in Danish fiction has to be Sarah Lund from ’The Killing’, who in addition to her fascinating character has also immortalised the Faroese jumper (Photo: Tine Harden/DR) ’Borgen’ and ’The Killing 2’ have both been nominated for the prestigious BAFTA award, which is the British equivalent to the Oscars. The Danish series are fighting it out in the ‘Best International Series’ category, which the first season of ‘The Killing’ won last year ahead of successes such as the US series ‘Mad Men’. Both series have triumphed in Britain, where Sarah Lund from ’The Killing’ and her Faroese jumper have become something of a national treasure. ’Borgen’ and ’The Killing’ build upon the distinguished tradition that Danish public broadcaster DR’s drama station has developed over the past 15 years,

The 30 Best Films of the Decade 20. Super Troopers Say what you’d like about the movies they’ve made since, but don’t spread ill-will toward Broken Lizard’s breakout hit. The first ten minutes of this film might be some of the best scripted comedy in history, let alone the decade. This is one of two most-quotable films on our list, one that forever popularized the mustache ride. It has just as much wackiness as it does earnest human moments, which makes all the difference. Todd Solondz: I’m Judd Apatow’s dark side At one point in my conversation with filmmaker Todd Solondz — which was very friendly and funny overall — he accused me of using big words and having gone to graduate school. (Only for one semester, I protested.) This from a guy who describes his own movies as “a kind of crucible” designed to force the audience to confront uncomfortable truths. That’s not the only evident contradiction in the life and work of Solondz, a writer and director who burst to prominence in the late ’90s with the art-house hits “Welcome to the Dollhouse” and “Happiness,” but since then has pursued an ever more individual and idiosyncratic path.

Michael Fassbender’s David in Prometheus is just the latest great robot performance. Still from the Prometheus promotional video "Meet David." For all the blood and tentacles in Ridley Scott’s new sci-fi horror film Prometheus, the creepiest part may be Michael Fassbender’s wonderfully uncanny performance as the robot David. Many actors have leapt into the discomfiting chasm between the human and the inhuman, known as the uncanny valley, but few actors have as gracefully danced to-and-fro across the divide. He’s such a robot! He’s such a human! That eerie territory has never been so much fun.

New Dolby Technology to Make Horror Movies Scarier FilmDistrict If you don’t like the sounds in scary movies but sometimes get dragged along to the theater anyway, you’re not going to be a big fan of the latest technology from Dolby Laboratories. The company announced a new sound system Monday called Dolby Atmos, which can move sounds around a theater in an entirely new and realistic way. Rather than pushing the sound out from the left and right side of the theater, as happens in movies today, the new Atmos system will also deliver sound from above in a theater and will be able to swirl sound around in any direction. During a demonstration at Dolby’s San Francisco headquarters, Stuart Bowling, senior technical marketing manager for Dolby Laboratories, said the Atmos system was one of the most advanced technical jumps the company had made in 20 years and would create an entirely new viewing experience for theatergoers. The new sound system is incredibly realistic.