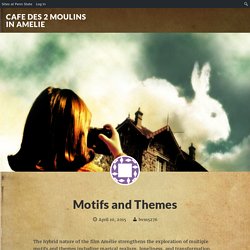 Many critics and audiences link Amélie to the literary genre of fairytales, however the plot in the film is not supernatural. The world around Amélie shows magical elements in a way that makes is seem like everything is possible. “Objects and photographs come to life and discuss the action; clouds adopt the reassuring shapes of cuddly toys; a street prompter suggests witty comments; and personal dreams are broadcast on television” (Vanderschelden 39). These elements add life to the film, however they do not deviate from the plot and make it seem impossible. The film is very real with magical elements present, therefore showing a common motif of magical realism throughout all aspects of it. ‘The Letter’ (HD) - Audrey Tautou. Amelie Childhood memories box scene. Camera work and editing useful terms. My favourite film. Amelie- Film Analysis by Gaby Grant on Prezi.

Film Study - Amelie by Kathleen Gibbs on Prezi. Deconstructing Amelie @ Evan E. Richards. Amélie is one of my favorite films. 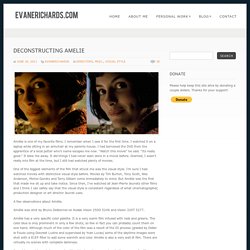 I remember when I saw it for the first time. I watched it on a laptop while sitting in an armchair at my parents house. I had borrowed the DVD from the apprentice of a local potter who’s name escapes me now. “Watch this movie” he said. “Its really good.” One of the biggest elements of the film that struck me was the visual style. A few observations about Amélie. Amélie was shot by Bruno Delbonnel on Kodak Vision 250D 5246 and Vision 320T 5277. Amélie has a very specific color palette. Jeunet loves wide angle lenses and putting his characters very close to the camera. 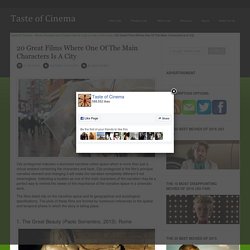 City-protagonist is the film’s principal narrative element and changing it will make the narration completely different if not meaningless. Indicating a location as one of the main characters of the narration may be a perfect way to remind the viewer of the importance of the narrative space in a cinematic work.

The films listed rely on the narrative space and its geographical and sociological specifications. The plots of these films are formed by numerous references to the spatial and temporal phase in which the story is taking place. 1. The chosen locations of this film are all places found in Rome, except for one case where, for an obvious ironic reason, the spectator finds Jep Gambardella (Toni Servillo) standing before a sinking ship in Grossetto, Tuscany for a brief scene that indicates hopelessness and depression. 2. 3. 4. 5. 6. 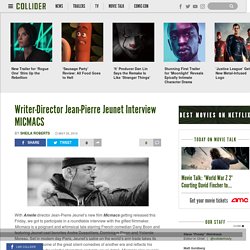 Micmacs is a poignant and whimsical tale starring French comedian Dany Boon and featuring Jeunet cast favorites Andre Dussolliers, Dominique Pinon and Yolande Moreau. Set in modern day Paris, Jeunet’s satire on the world’s arm trade takes its inspiration from some of the great silent comedies of another era and reflects his extraordinary eye for colorful characters and rich visual detail. Micmacs also reveals once again Jeunet’s unique sensibility for addressing matters of life and death in a distinctly original way with poetry, imagination and emotion. During the interview, Jeunet talked to us about what drew him to the project, how he infused the film’s political undercurrent with magical realism to make his point, and why ingenuity and imagination can be a powerful defense against violence in today’s world. Jeunet: Yes. Amelie. Amélie - Symmetry & Camera Movement. The Cinematography of Amelie. A Glimpse Into the Art of Editing: Amélie (2001)