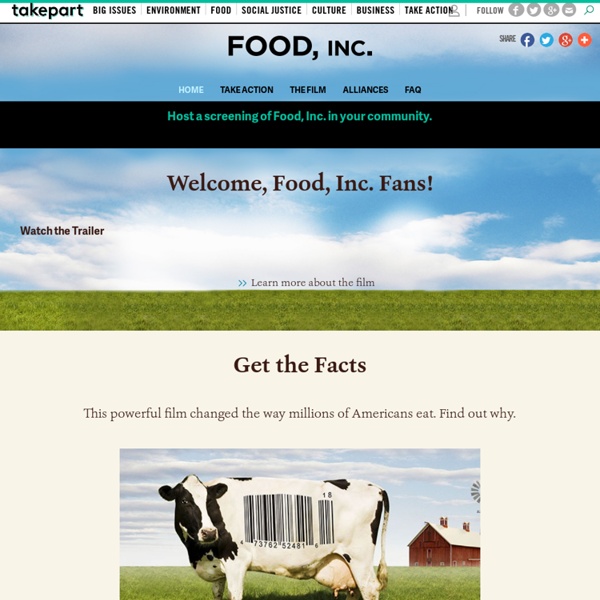 Welcome, Food, Inc. Fans! You Are the Food, Inc. Movement. After receiving impressive testimonials from people who are promoting healthier, sustainable choices in their own lives and communities, Participant Media, pivot TV, and TakePart.com are thrilled to announce the winners of the first annual Food, Inc. Awards! TakePart is committed to covering the landscape of food, from important policy news about factory farming and the food industry, to lifestyle content that will help you make better choices when it comes to sustainable and ethical practices.

Burning the Future: Coal in America Burning the Future: Coal in America dramatically documents the devastating environmental, health and social impact our addiction to coal has on West Virgina, where mountaintop removal mining has obliterated 1.4 million acres of mountains and polluted the groundwater. The film profiles the courageous West Virginians who challenged the powerful coal industry, and launched a valiant fight to arouse the nation's help in protecting their mountains, saving their families, and preserving their way of life. Host a Screening | Buy the DVD | About the Film “burns through the 'clean coal' rhetoric, showing the harsh truth of the coal story.” - SIERRA CLUB / Bruce Niles, Director, National Coal Campaign

The Revolution Will Not Be Televised The Revolution Will Not Be Televised (a.k.a. Chavez: Inside the Coup) is a 2002 documentary about the April 2002 Venezuelan coup attempt which briefly deposed Venezuelan President Hugo Chávez. A television crew from Ireland's Radio Telifís Éireann happened to be recording a documentary about Chávez during the events of April 11, 2002. Shifting focus, they followed the events as they occurred. During their filming, the crew recorded images of the events that they say contradict explanations given by Chávez opposition, the private media, the US State Department, and then White House Press Secretary Ari Fleischer. The documentary says that the coup was the result of a conspiracy between various old guard and anti-Chávez factions within Venezuela and the United States.

Food Matters Let thy Food be thy Medicine and thy Medicine be thy Food - Hippocrates. That is the message from the founding father of modern medicine echoed in the controversial new documentary film Food Matters from Producer-Directors James Colquhoun and Laurentine ten Bosch. With nutritionally-depleted foods, chemical additives and our tendency to rely upon pharmaceutical drugs to treat what's wrong with our malnourished bodies, it's no wonder that modern society is getting sicker. Food Matters sets about uncovering the trillion dollar worldwide sickness industry and gives people some scientifically verifiable solutions for overcoming illness naturally. PETA: Video shows abuse at Hickory dairy farm - WCNC.com CHARLOTTE, N.C. (AP) - The group People for the Ethical Treatment of Animals said it has a video showing sick, emaciated cows being forced to stand in knee-deep manure for hours, even when the animals are milked and fed at a North Carolina dairy farm. The organization is asking several state agencies and law enforcement to conduct an emergency inspection of the Osborne farm in western North Carolina.

Food, Inc. Food, Inc. is a 2008 American documentary film directed by Emmy Award-winning filmmaker Robert Kenner.[3] The film examines corporate farming in the United States, concluding that agribusiness produces food that is unhealthy, in a way that is environmentally harmful and abusive of both animals and employees. The film is narrated by Michael Pollan and Eric Schlosser.[4][5] Content[edit] The film's first segment examines the industrial production of meat (chicken, beef, and pork), calling it inhumane and economically and environmentally unsustainable. The second segment looks at the industrial production of grains and vegetables (primarily corn and soy beans), again labeling this economically and environmentally unsustainable. Interviews[edit]

Cryptic Moth Productions "Addicted To Plastic" ADDICTED TO PLASTIC is a feature-length documentary about solutions to plastic pollution. The point-of-view style documentary encompasses three years of filming in 12 countries on 5 continents, including two trips to the middle of the Pacific Ocean where plastic debris accumulates. The film details plastic's path over the last 100 years and provides a wealth of expert interviews on practical and cutting edge solutions to recycling, toxicity and biodegradability. These solutions - which include plastic made from plants - will provide viewers with a hopeful perspective about our future with plastic. Addicted to Plastic Photos Addicted to Plastic Trailer 1

My Stuff My Stuff You lock away all your worldly possessions in storage, and decide to take back only one thing a day... What's the first thing that you'd choose? Factory Farms A factory farm is a large, industrial operation that raises large numbers of animals for food. Over 99% of farm animals in the U.S. are raised in factory farms, which focus on profit and efficiency at the expense of animal welfare. Powered by Cincopa <a href=' Hosting for Business</a> solution.

Aluna the Movie About the Movie ALUNA is being made by and with the KOGI, a genuine lost civilization hidden on an isolated triangular pyramid mountain in the Sierra Nevada de Santa Marta, Colombia, nearly five miles high, on the Colombian-Caribbean coast. The Kogi say that without thought, nothing could exist. This is a problem, because we are not just plundering the world, we are dumbing it down, destroying both the physical structure and the thought underpinning existence. The Kogi believe that they live in order to care for the world and keep its natural order functioning, but they recognized some years ago that this task was being made impossible by our mining and deforestation.

Treatment of Farm Animals Beginning of a Movement During its first 27 years, American Humane Association focused on improving the conditions of livestock during transit. It was this issue that led individual humane societies and societies for the prevention of cruelty to animals (SPCAs) to band together in a national organization. Through this united effort, members of the new American Humane Association met annually to address numerous national animal welfare issues, two of which have remained in the forefront of the humane movement for more than a century -- humane transport of livestock and the humane slaughter of food animals.