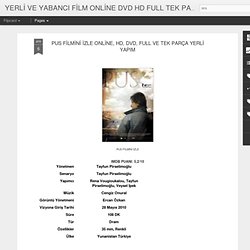 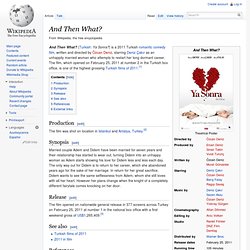 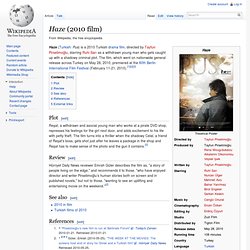 The film, which went on nationwide general release across Turkey on May 28, 2010 (2010-05-28), premiered at the 60th Berlin International Film Festival (February 11-21, 2010).[1][2][3] Reşat, a withdrawn and asocial young man who works at a pirate DVD shop, represses his feelings for the girl next door, and adds excitement to his life with petty theft. A Time for Drunken Horses. A Time for Drunken Horses (Persian: زمانی برای مستی اسب‌ها‎, Zamani barayé masti asbha, Kurdish: Demek jibo hespên serxweş [1]) is a 2000 Iranian (Kurdish/Persian) film directed by Bahman Ghobadi and produced in Iran. 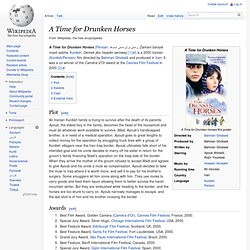 It was a co-winner of the Caméra d'Or award at the Cannes Film Festival in 2000 [2]. Plot[edit] An Iranian Kurdish family is trying to survive after the death of its parents. Vodka Lemon. Crossing the Dust. Crossing the Dust (Kurdish: Perrînewe le xobar) is a 2006 film directed by the Kurdish director Shawkat Amin Korki. 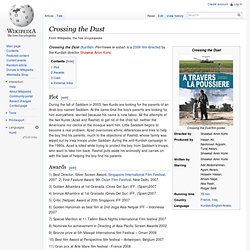 Plot[edit] During the fall of Saddam in 2003, two Kurds are looking for the parents of an Arab boy named Saddam. At the same time the boy's parents are looking for him everywhere, worried because his name is now taboo. All the attempts of the two Kurds (Azad and Rashid) to get rid of the child fail: neither the Americans nor clerics at the mosque want him. Little Saddam begins to become a real problem. Awards[edit] 4 Months, 3 Weeks and 2 Days. The Class (2008 film) The film received the Palme d'Or at the 2008 Cannes Film Festival,[3] making it the first French film to do so since 1987, when Maurice Pialat won the award for Under the Sun of Satan. 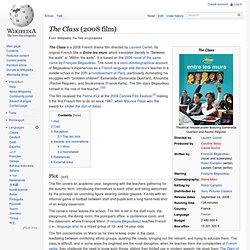 The film covers an academic year, beginning with the teachers gathering for the autumn term, introducing themselves to each other and being welcomed by the principal, an unsmiling figure wearing rimless glasses. It ends with an informal game of football between staff and pupils and a long hand-held shot of an empty classroom. Umut (film) Hope (Turkish: Umut) is a 1970 Turkish drama film, written and directed by Yılmaz Güney and Şerif Gören, featuring Güney as an illiterate horse cab driver, who, after losing one of his horses in an accident, sets out into the desert in a quest for a mythical lost treasure. 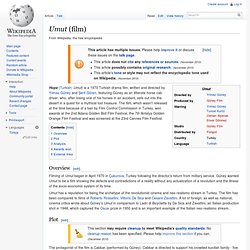 The film, which wasn't released at the time because of a ban by Film Control Commission in Turkey, won awards at the 2nd Adana Golden Boll Film Festival, the 7th Antalya Golden Orange Film Festival and was screened at the 23rd Cannes Film Festival. Filming of Umut began in April 1970 in Çukurova, Turkey following the director's return from military service. Güney wanted Umut to be a film showing the defects and contradictions of a reality without any actualization of a revolution and the illness of the socio-economic system of its time. Umut has a reputation for being the archetype of the revolutionist cinema and neo-realismo stream in Turkey. Zavallılar. Zavallılar is a film directed by Yılmaz Güney and written by Yılmaz Güney and Atıf Yılmaz. 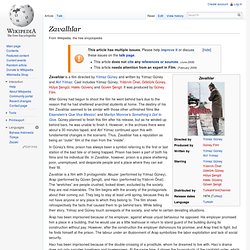 Cast includes Yılmaz Güney, Yıldırım Önel, Göktürk Güney, Hülya Şengül, Hakkı Güvenç and Güven Şengil. It was produced by Güney Film. After Güney had begun to shoot the film he went behind bars due to the reason that he had sheltered anarchist students at home. The destiny of his film Zavallılar seemed to be similar with those other unfinished films like Eisenstein’s Que Viva Mexico! , and Marilyn Monroe’s Something's Got to Give. In Güney’s films, prison has always been a symbol referring to the first or last station of the bad fate or of being trapped.

The White Ribbon. The White Ribbon is a 2009 black-and-white German-language drama film written and directed by Michael Haneke.[4] Das weiße Band, Eine deutsche Kindergeschichte (literally, "The White Ribbon, a German Children's Story")[5][6] darkly depicts society and family in a northern German village just before World War I and, according to Haneke, "is about the roots of evil. 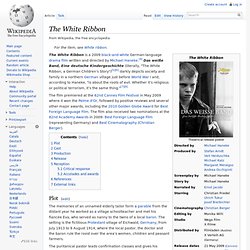 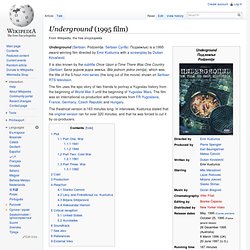 The film uses the epic story of two friends to portray a Yugoslav history from the beginning of World War II until the beginning of Yugoslav Wars. The film was an international co-production with companies from FR Yugoslavia, France, Germany, Czech Republic and Hungary. The theatrical version is 163 minutes long.

In interviews, Kusturica stated that his original version ran for over 320 minutes, and that he was forced to cut it by co-producers. Underground depicts the life of two friends throughout World War II, Cold War, and the Yugoslav Wars. The film opens in Belgrade, the capital of the Kingdom of Yugoslavia, in the early morning hours of Sunday, 6 April 1941 as two roguish bon vivants Petar Popara nicknamed Crni (Blacky) and Marko Dren are heading home following a night of hard drinking and partying out on the town.

The Wind That Shakes the Barley (film) The Wind That Shakes the Barley is a 2006 British-Irish war drama film directed by Ken Loach, set during the Irish War of Independence (1919–1922) and the Irish Civil War (1922–1923). Written by long-time Loach collaborator Paul Laverty, this drama tells the fictional story of two County Cork brothers, Damien O'Donovan (Cillian Murphy) and Teddy O'Donovan (Pádraic Delaney), who join the Irish Republican Army to fight for Irish independence from the United Kingdom. Taste of Cherry. Taste of Cherry (Persian: ... The Edge of Heaven (film) After making its worldwide debut at the Cannes Film Festival in France, the film was shown at several international film festivals.

It was released in Germany on 27 September 2007. Yeter's Death Retired widower Ali Aksu (Tuncel Kurtiz), a Turkish immigrant living in the German city of Bremen, believes he has found a solution to his loneliness when he meets Yeter Öztürk (Nursen Köse). He offers her a monthly payment to stop working as a prostitute and move in with him. After receiving threats from two Turkish Muslims, she decides to accept his offer. Lovelorn (film) Lovelorn (Turkish: Gönül Yarası) is a 2005 Turkish drama film, written and directed by Yavuz Turgul, starring Şener Şen as a teacher recently returned to Istanbul who must protect a nightclub singer from her violent ex-husband. The film, which went on nationwide general release across Turkey on January 7, 2005 (2005-01-07), won award at film festivals in Antalya, Palm Springs and New York. Nazım, a primary school teacher, returns to Istanbul from his posting in the east .

He temporarily takes on a job as a taxi driver with the help of his friend Atakan. One night he picks up Dünya, a singer at a club and after striking up a friendship, becomes her driver. While Nazım is waiting for Dünya to finish her performance one night, she is attacked by a man. Watch Bliss (2007. Romantic Comedy (2010 film) The Extremely Tragic Story of Celal Tan and His Family.

The Extremely Tragic Story of Celal Tan and His Family (Turkish: Celal Tan ve Ailesinin Aşırı Acıklı Hikayesi) is a 2011 Turkish comedy-drama film, written and directed by Onur Ünlü, starring Selçuk Yöntem as a widowed constitutional law professor, whose life takes a turn for the worse when he remarries to a university student, whose life he has saved.

Bliss (2007 film) Pandora's Box (2008 film) Pandora's Box (Turkish: Pandora'nın Kutusu) is a 2008 Turkish drama film directed by Yeşim Ustaoğlu. Two sisters and a brother living in the centre of Istanbul are confronted with the care for their dementing mother who they brought back with them from the mountains near the Black Sea where she lived. As the siblings start reminiscing about their mother, the tensions between them quickly become apparent; like a Pandora’s Box which is spilled open, all the unresolved disputes are scattered around. The confrontation with their mother’s sordidness brings them to realize how poor their own lives are. It is only the oldest daughters rebellious son Murat who empathizes with the old woman and an unusual alliance is born between the two.